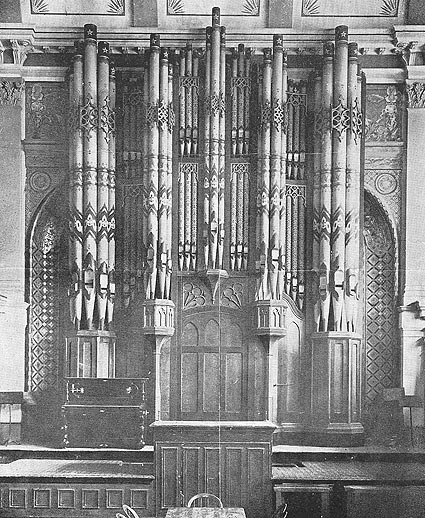 The organ was built in 1888 by Fincham & Hobday and exhibited in the Melbourne Centennial International Exhibition of that year where it was awarded a First Order of Merit. In January 1890 it was installed at Freemasons Hall, Collins Street, Melbourne.

Following extensive alterations to the Hall, the instrument was sold and installed at the Lyceum Hall, Sydney in 1905 and removed in c.1929. Parts were used for other organs built by C.W. Leggo and S.T. Noad.

1905: An organ by George Fincham (1888) was installed from the Centennial International Exhibition, Melbourne (3 manuals, 42 speaking stops, tubular-pneumatic action) in the Lyceum Hall, Sydney. This organ had been installed in the Masonic Hall, Melbourne in 1889 and was subsequently sold in 1905 to Ebenezer Vickery MLC for installation in the Lyceum Hall which he donated to the Central Methodist Mission in 1908. This was the third largest organ built in 19th century Australia – the two that were larger were at the Exhibition Building, Melbourne (1880) and at the Australian Church, Melbourne (1890) both by the Fincham firm. It was a remarkable example of late nineteenth-century organbuilding in conservative Romantic style. While its sound is now beyond recall, the specification, with its well-developed Diapason ensemble (including the Pedal division with Principals at 8', 5-1/3' and 4' pitches) clearly reflects the classical outlook of conservative English builders like Hill & Son, who, in turn, had been influenced by the North German eighteenth-century organ. The specification of the 1888 Fincham organ was:

1928: The Fincham organ was removed and broken up and replaced by a 9-rank Christie (Hill, Norman & Beard) organ

Click here for a pdf of the pamphlet issued by George Fincham & Son c.1900. This pamphlet contains a full specification and description of the organ.