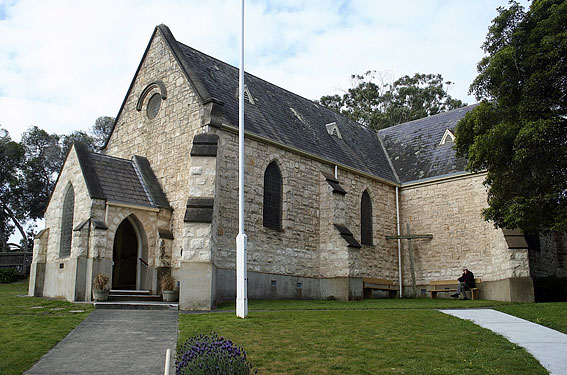 The nave of St John's Church was built in 1874 by George Morce and constructed in massive blocks of limestone in a simple Gothic style with diagonal buttresses. The transepts were added in 1889 and the apsidal chancel in 1908-11. The stained glass includes a window from the original St Paul's Church, Melbourne by Ferguson & Urie and others by William Montgomery and Alan Sumner.1 The interior woodwork remains unvarnished with an attractive patination. 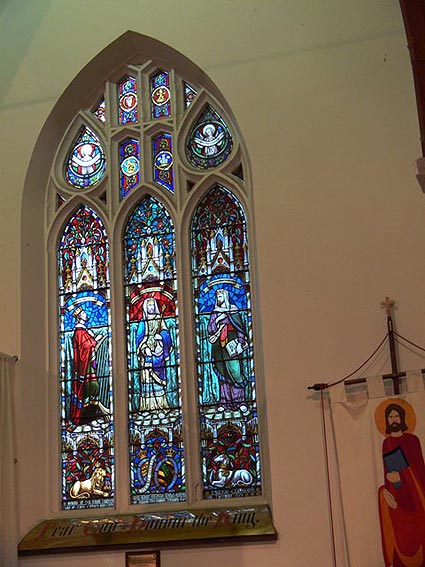 The first organ in this church was of English origin and probably dated from the 1850s. There was no builder's plate and it has been difficult to identify the builder. It was installed at St John's Church in 1924 by George Fincham & Sons and came from St Andrew's Anglican Church, Clifton Hill, where it was replaced by a larger Fincham instrument from All Saints' Anglican Church, East St Kilda. It was the gift of Clements Langford in memory of his wife.2 The instrument was of interest for its attractive casework (later overpainted in white), with overhang, attractive cornice mouldings and three towers with ogee arches containing stencilled dummy pipes. The casework, originally varnished but subsequently overpainted on several occasions, may not belong to the internal parts of the instrument.3 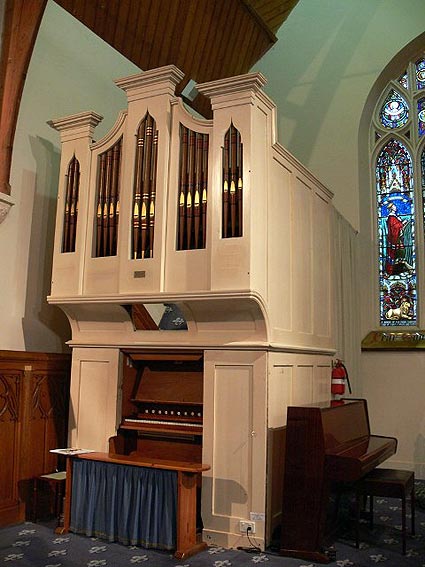 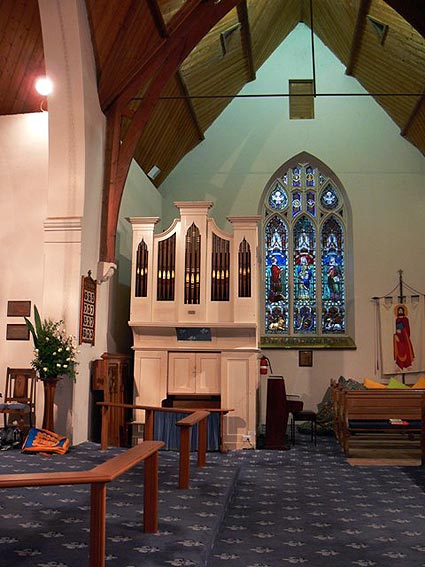 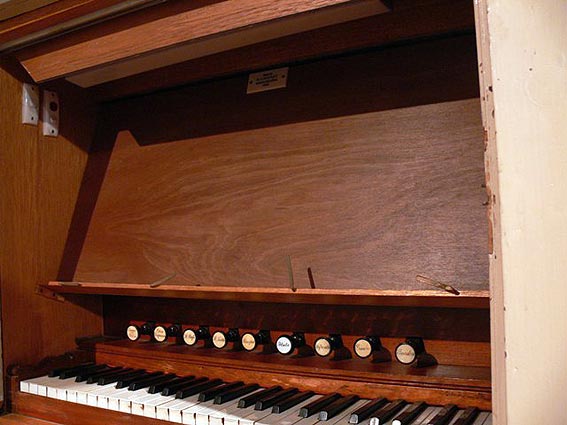 
The drawknobs retain their original script engraving, without pitch designations, and a tapered Bell Gamba is placed on the front slide. Restoration work was carried out in 1964 by Davis & Laurie and in 1980 by R.J. Heatley at which time some of the console woodwork, including the music desk, was replaced and the compass of the Pedal Bourdon extended. It was removed into storage in 2019 by Hargraves Pipe Organs Pty Ltd.4

The present two-manual organ of nine speaking stops was built in 1908 by Nicholas T. Pearce of Christchuch, NZ, for the Methodist Church, Woolston, NZ using components supplied by Gray & Davison, London (job number 10791).6 It had been overhauled in 1980 by the South Island Organ Company Ltd, who added an Octave 4ft to the Great Organ and moved the Harmonic Flute to the Swell, placed on a clamp at the rear.The organ was moved in 1981 to Christchurch Cathedral Grammar School chapel by Bernard Bicknell.

After the Christchurch earthquake, the building was dismantled and moved to Lyttelton. The Pearce organ was placed in storage in Timaru aound 2009-10 by the South Island Organ Company, and has been installed in its present location at Sorrento by Hargraves Pipe Organs Pty Ltd in 2019. It fits into a small footprint on the east wall of the south transept, speaking down the building, with the Pedal Bourdon placed at the side. The console fittings are of oak with Willis-style keycheeks, and the case timbers are of Kauri, clearly manufactured by Pearce. The zinc façade pipes retain their original stencilling. 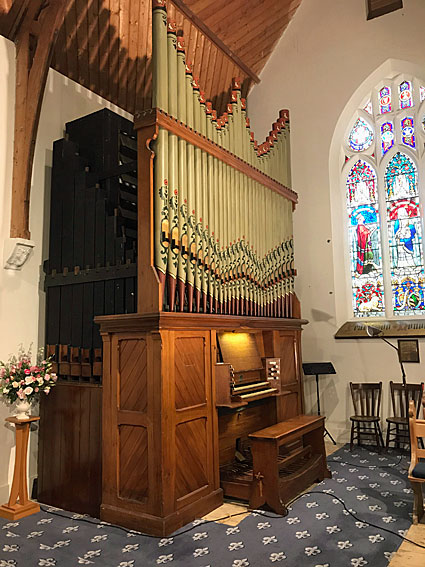 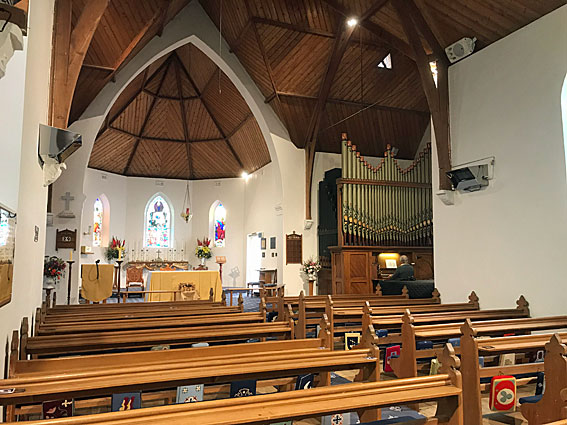 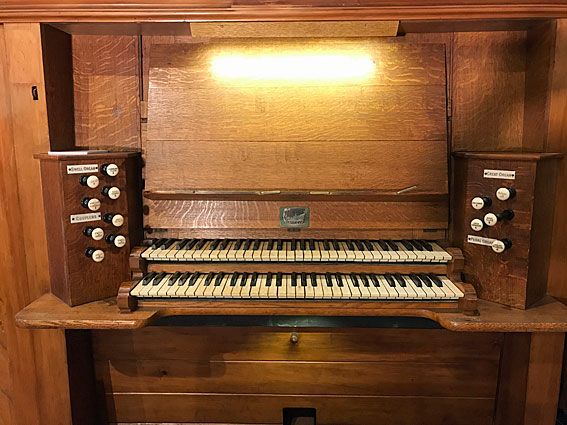 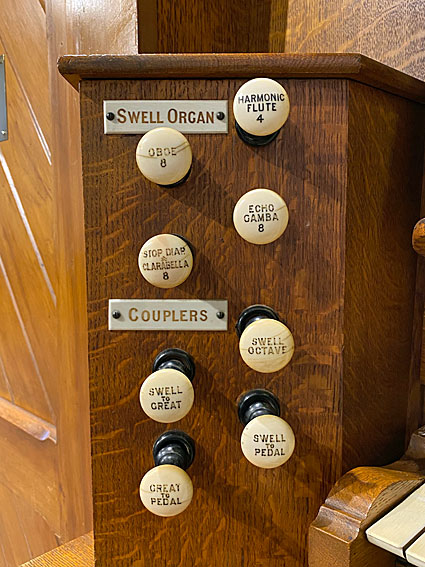 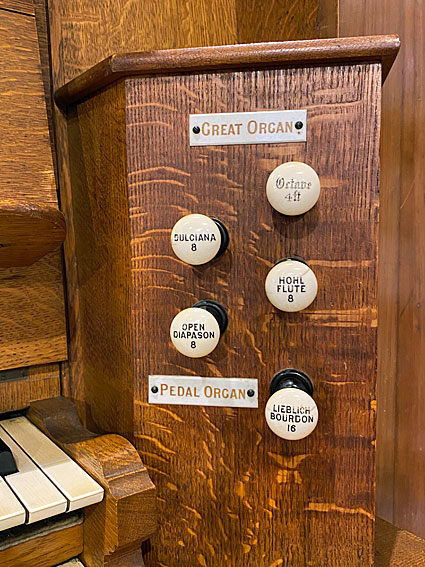 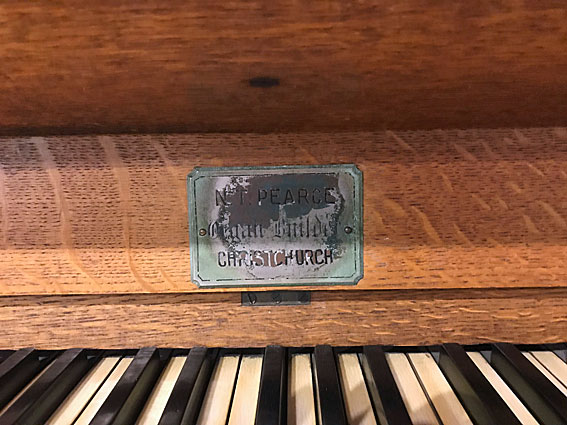 6 Researched by Christopher Templeton in his 2010 paper "N.T. or not N.T. - that is the Question:  A reassessment and evaluation of the work of Nicholas Thomas Pearce."
Available at: https://nzopt.org.nz/wp-content/uploads/2017/06/Pearce_Templeton_2010.pdf