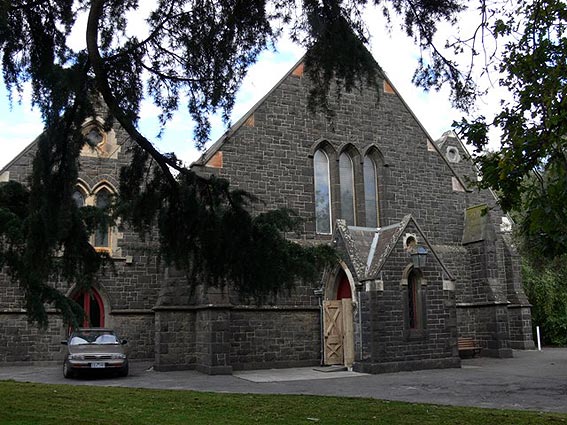 St Stephens Parish, which dates from 1849, was the first to be established in the eastern suburban area. An acre of land was offered in this year by the Revd Joseph Docker, a local landowner, after whom Dockers Hill was named, and by the end of the year Arthur Newson and James Blackburn had been engaged to design a church building. The foundation stone was laid in June 1850 and the unfinished church opened in November 1851. Further work, mainly on the interior, was carried out in 1854 under the supervision of architect Charles Webb. In 1863 the north aisle was erected to the design of Nathaniel Billing, and the west wall of the church rebuilt. In 1876 the south aisle and chancel were erected under the supervision of architect D. Goldie while in 1923 the choir vestry was erected by Clements Langford, thus completing the fabric of the building as it stands today.

At one stage, Robert Speechly, a pupil of English architect Gilbert Scott, produced a fine design for the south aisle, chancel and a tower and spire, in the idiom of English architect G.E. Street, to be placed at the western end of the south aisle, while at a later stage, D. Goldie designed a tower and spire to be placed at the north-east end of the building, adjacent to the sanctuary, neither of which were built.

There are other substantial church buildings on the site, including the massive Jubilee Hall and School Hall some dating back to 1857.

St Stephens is built in bluestone and comprises a nave of five bays, with wide flanking aisles (originally filled with galleries), chancel and vestries. The interior was refurbished in the 1980s, with the removal of many pews, overall carpetting, and installation of chairs. The original chancel, however, remains intact, with its choir stalls, tesellated tiled floor, wall decorations and altar furnishings.

The church contains important stained glass by prominent local firms including the east and west windows, by Ferguson & Urie, of North Melbourne, by Brooks, Robinson in the aisles, and an unusual window at the west end of the south aisle 'Noli me Tangere', one of the very few known examples of the work of August Fischer, who worked in Melbourne from 1893-1910. There are several modern windows in the aisles, one including references to the pioneering Docker family.

The most significant object in the interior is the three-manual pipe organ built in 1865 by the noted London organbuilder Joseph Walker at a cost of £650 for the music room of 'Rose Hill', a large residence near the corner of Glenferrie & Toorak Roads, Toorak, owned by William Philpott, the firms job number 776. In 1869 the organ was sold to St Stephen's replacing an earlier organ by Bevington of London which is thought to have ended up at St Matthias' Church in North Richmond, and was broken up for parts in 1971.

The instrument is notable for its solidity of construction and the lavish use of materials. The casework and console fittings are of oak while all of the metal pipework is of spotted metal. The provision of upperwork is very generous, with 14 ranks above 4ft pitch.

The Walker organ remains substantially intact (apart from the addition of a few stops to the Choir Organ) in part due to the vigilant attitude of the organist of the 1960s and 70s Bruce Evans; it is considered to be of international significance for its size and level of originality. It has an oak case, with spotted metal façade pipes, and an attached console, retaining the original keyboards and drawstops. Its tonal quality and range is outstanding.

The instrument is notable for its solidity of construction and the lavish use of materials. The casework and console fittings are of oak while all of the metal pipework is of spotted metal. The provision of upperwork is very generous, with 14 ranks above 4ft pitch.

Minor restoration was carried out in 1963 by Arthur Jones for J.W. Walker & Sons Ltd, but the scope of this work was limited and largely consisted of work on the mechanical actions and the fitting of tuning slides.

In recent years, the organ had become increasingly difficult to play in summer months, with the swell action impossibly heavy. The wind reservoir was close to collapse, still retaining its leather from the 1860s. Much of the pipework was out of regulation owing to the poor condition, particularly leakage and runnings, of the windchests. Moreover, the position of the organ was unfortunate, the sound broken up by a low arch and only about two-thirds of the front case visible. 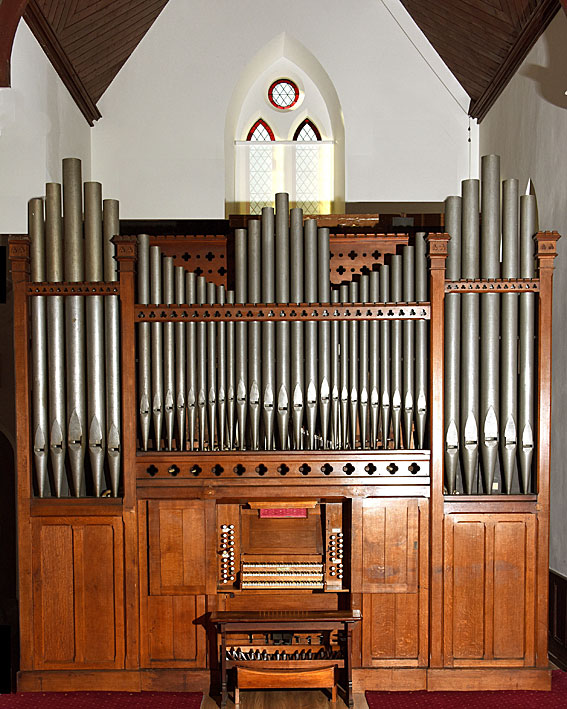 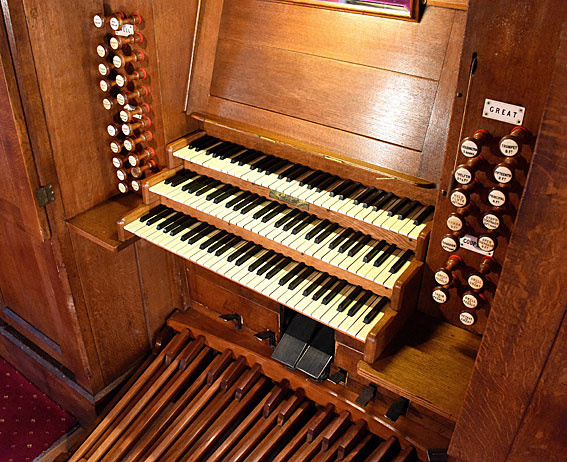 The most recent extensive restoration, in 2018-2019, has been carried out by Wakeley Pipe Organs Pty Ltd, of Bayswater, Victoria and funded by an OHTA appeal. The Organ Historical Trust of Australia is listed on the Federal Government's Register of Cultural Organizations (ROCO) and can grant tax-deductibility to fund raising projects for approved organ restorations. The appeal target was $325,000 and the appeal has been highly successful, attracting a number of major donations. John Maidment OAM has acted as consultant for the work which has been carried out under the supervision of Heritage Victoria, with whom the instrument is registered.

The current work has included:

 Complete dismantling of the organ and removal to the organbuilder's workshop
 Releathering of the large double-rise reservoir and feeders and hand-blowing facility
 Restoration of the manual and pedal slider chests, involving the planing down and levelling of the tables, refitting of sliders and releathering of pallets
 Complete overhaul of the manual and pedal coupling actions and roller boards
 Minor restoration to the console, replacement of felt drawstop ferrules, overhaul of keyboards and pedal board
 Minor repairs to metal pipework including removal of the later Fincham dust bonnets placed on the Great Trumpet (these served to stifle the sound) and small extensions to the pipes to restore original lengths
 Repairs to wooden pipework, particularly addressing splits and cracks in the larger pipes
 Repairs to the left hand side of the oak case panelling, cut away when the Choir box was added and reconstruction of missing timber in figured oak to match up with the left side of the Choir swell box which is now visible
 Construction of a raised tuning platform to enable the rear pipes of the Choir Organ to be tuned safely
 Rotation of the organ through 90 degrees to face down the aisle and placement at floor level to provide a greatly enhanced visual and acoustical result

Restoration of the slider windchests has had a dramatic effect upon pipe speech and voicing. Some of the manual fluework had been re-regulated to cope with winding irregularities, but all is now speaking at its correct pressure and tonal quality.

The mechanical action is now working much more freely as a result of the work. It had become severely misaligned owing to movement in the organ's framing. The Great octave coupler may now be used with ease.

All of the original timber finishes have been preserved and no repainting of surfaces has taken place, in line with current conservation best practice.

The appearance and sound of the organ has been greatly enhanced through its rotation to face down the south aisle. The whole of the case is now visible and the sound is no longer trapped under a low arch. With 14 ranks of upperwork, the sound is extraordinarily brilliant and the Mixtures have only unison and quint partials. 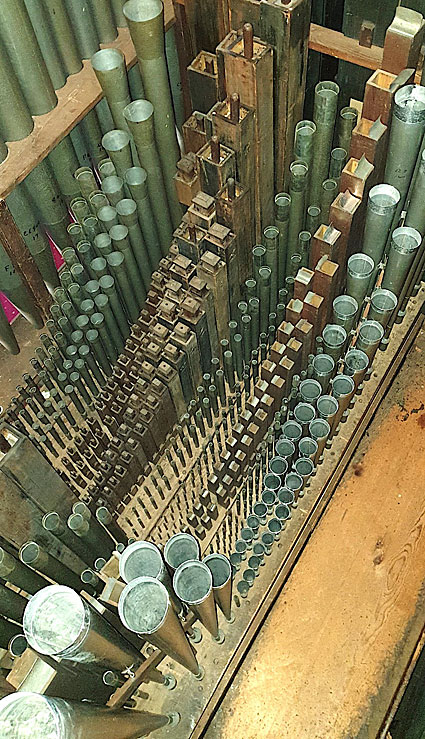 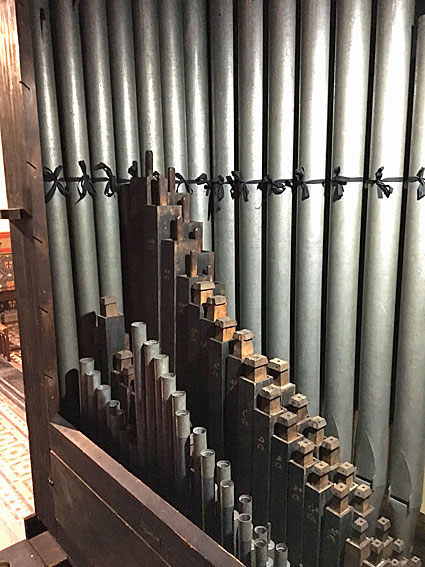 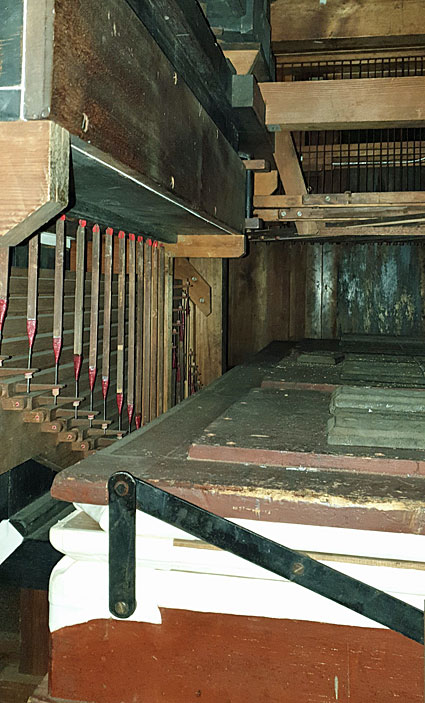