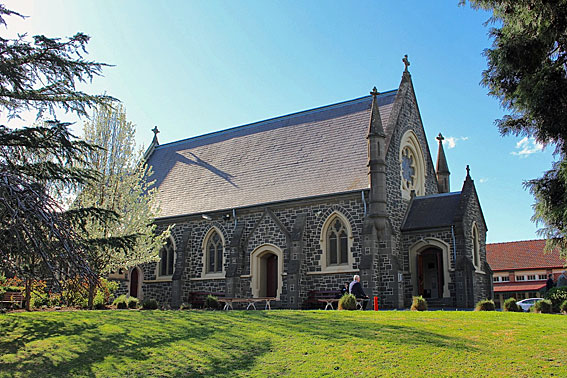 
The Alfred Fuller organ was installed at St John’s Church in 2000 following a comprehensive restoration by Wakeley Pipe Organs Pty Ltd in association with Marc Nobel and Christine Holmes, who were responsible for the restoration of the façade pipe decoration together with the outstanding fiddleback blackwood casework and console. St John’s Church is a notable example of the work of the distinguished architect William Wardell in the decorated Gothic style, with an outstanding east window incorporating curvilinear tracery and glass by William Montgomery. Earlier pipe organs were by S. Sakacs and a three-rank single manual extension organ by George Fincham & Sons dating from 1967.

The instrument was built in 1890 by Fuller for St Mary’s Catholic Church, Echuca, on Victoria’s border with New South Wales, and we are fortunate to be able to quote from a contemporary account in The Advocate for 31 May 1890, pp.16-17. We acknowledge the kind assistance of the Melbourne Diocesan Historical Commission of the Catholic Archdiocese of Melbourne in providing this material via Dr Geoffrey Cox:

‘The grand pipe organ, built by Mr. Alfred Fuller, of Kew, Melbourne, was used for the first time on Sunday at Pontifical High Mass. The fine tone and rich volume of the instrument were very favourably commented on. The builder has kindly furnished your correspondent with particulars:- The organ is placed at the south end of the gallery, which gives the organist the advantage of seeing both the altar and the full choir also, besides the advantage of providing more sitting accommodation in the gallery. The instrument contains two complete keyboards with an independent pedal organ, played entirely with the feet, and which gives out the grave and solemn bass so essential to the rendition of the grand music of the Catholic Church. Each keyboard has its own organ, one of which is enclosed in a thickly-constructed box, with venetian shades, worked by a pedal, for graduating, or, in musical words, providing a crescendo effect. The great organ, or lower keyboard, has open diapason, dulciana, charibre, principal, harmonio and piccolo. The swell organ contains violin, diapason, saconnel, clarionet, flute. Waldflute, tremulant, bourdon, swell to great, swell to pedals, great to pedals. There are also two composition pedals for drawing the stops of double action. The case is of beautiful design of figured blackwood, etc. There are all 510 pipes. I may mention that one of the advantages of a colonial-built organ is that the joinings are so placed together as to allow for expansion and contraction, unavoidable in the Australian climate. The only imported parts are the pipes of English manufacture.’

This instrument remained completely intact up to the 1960s and was still hand blown up to the time of its removal in 1970 to the chapel of St Mary’s Redemptorist Monastery, at Wendouree, Ballarat. Here it was placed on the rear gallery, the façade pipe decoration obliterated by gold paint, but no major changes took place although an electric blower was fitted.

The instrument was removed from the chapel in 1998 following the sale of the monastery to commercial interests. The restoration by Wakeley Pipe Organs has involved the complete overhauling of the slider windchests, the mechanical key and stop actions and the tubular-pneumatic action to the pedal (a unique survival of a Fuller pneumatic action, which was retubed in lead). The pipework was repaired and markings in spirit pen dating from 1970 carefully removed. The building frame and swell box were repainted in Fuller’s purple paint colour and the reservoir and feeders releathered to permit hand blowing, although a new Laukhuff blower was fitted. The original concussion bellows and tremolo, disconnected at Ballarat, have been releathered and refitted. Several stop labels were missing and these have been replaced in matching engraving while the ivory keyboards have been cleaned and whitened.

This instrument exhibits the almost luxurious nature of Fuller’s work, with its immaculate cabinet work in precious timbers and intricate detailing. The console incorporates cut-crystal knobs on the roll-top and a wind indicator enclosed within a glass panel, together with an original nameplate identical to that to be found on the 1888 Fuller organ now at St Mark’s Church, Fawkner.

The decoration of the façade pipes is especially elaborate, with a sumptuous range of colours. The unusual decoration to the central pipe above the console, together with the curved motif on the pipes in the flat, immediately beneath the transom rail, is thought to be unique amongst Fuller’s work. The wooden pipes down the left-hand side of the organ are also elaborately decorated and include faux pipe mouths. As the organ now occupies an identical position to that of its original location in the gallery at Echuca, the decoration of this side of the organ was considered important and is an extremely rare example of this practice.

The tonal palette of the instrument is strongly romantic-symphonic, in accord with Fuller’s philosophy. The unison ranks are rich and warm in colour, with minimal upperwork: the Harmonic Piccolo adds merely a muffled brightness. The unison registers are well-contrasted and include a stringy Violin Diapason on the swell (with unenclosed open bass at the rear of the box), a very quiet and keen Salicional and a distinctive Clarionet Flute, with long pierced wooden stoppers, a tonality possibly copied by Fuller from the instruments of Gray & Davison. 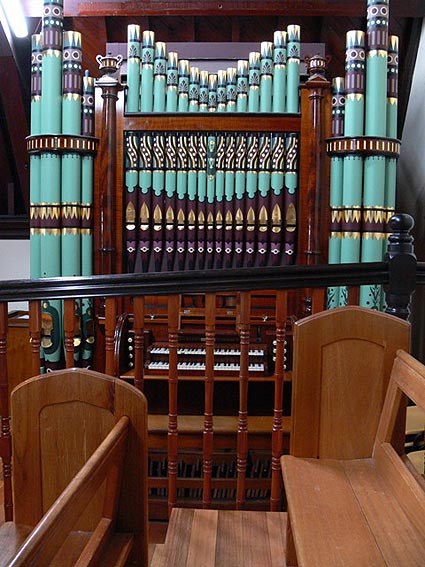 The organ was re-opened on Sunday 27 August 2000 at a recital given by Thomas Heywood. 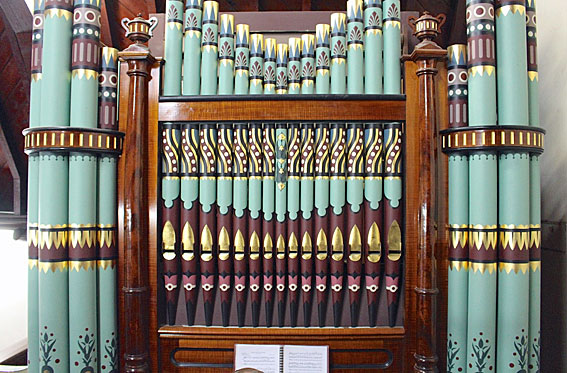 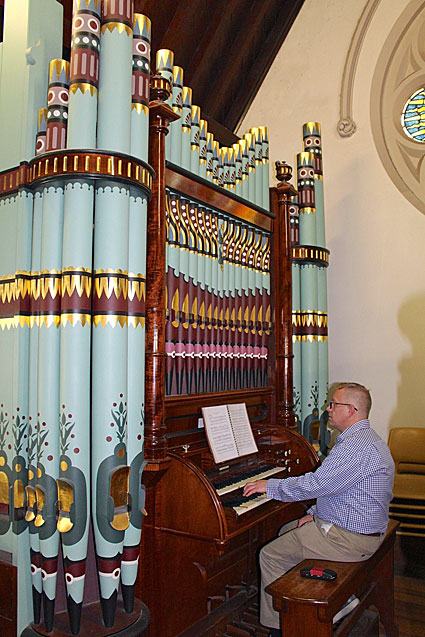 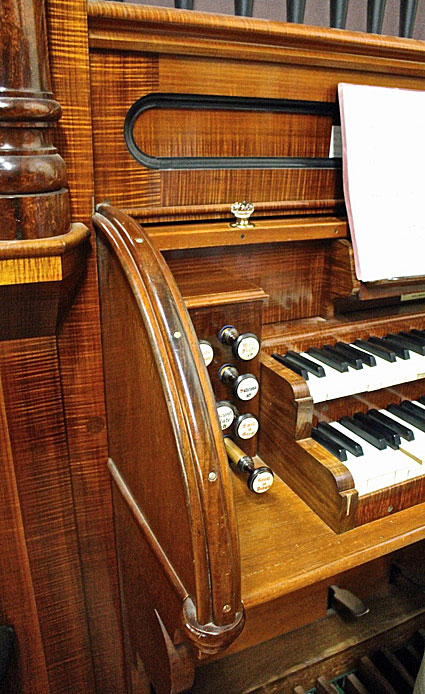 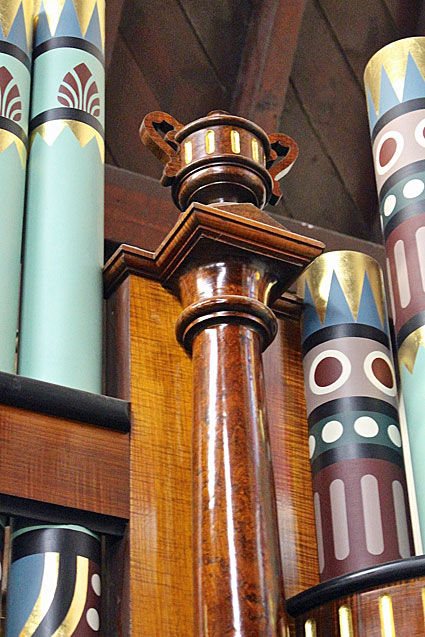 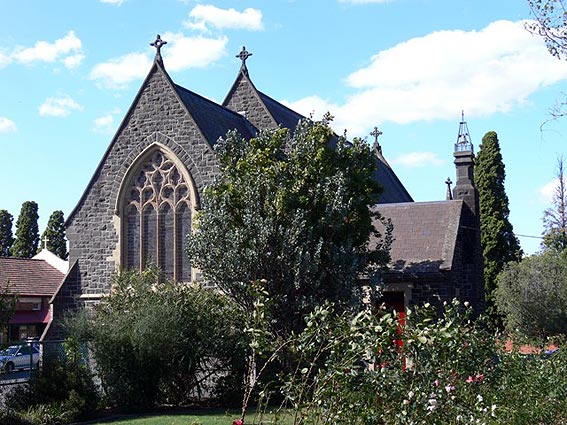