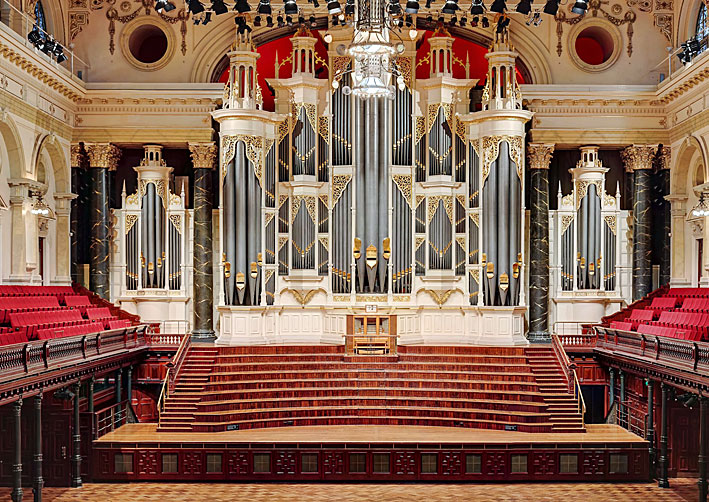 The foundation stone of the first section of the Town Hall was laid on 4 April 1868 by Prince Albert, Duke of Edinburgh and comprised the current vestibule (the original Town Hall) and civic offices.  Designed by architects Wilson, Bell & Bond, this was completed in 1869.  In 1879 the City Architect Thomas Sapsford prepared plans for the completion of the building, including the Centennial Hall, all of which was opened on 27 November 1889.  The clock tower had earlier been completed in 1881 and the clock and chimes installed in 1884-1885.  Built in sandstone in an Italian Renaissance style, the building incorporates a wealth of carved detail, mosaic pavements, elaborate plasterwork, stencilling, joinery, and etched and stained glass.  The whole complex has, in recent years, been carefully restored under the direction of heritage architect Howard Tanner, and the building was re-opened on 20 February 1992 by Her Majesty, Queen Elizabeth II.  This massive undertaking involved the reinstatement of the splendid original decorative schemes, as well as reproductions of the wrought iron 'electroliers', that once graced the interior. 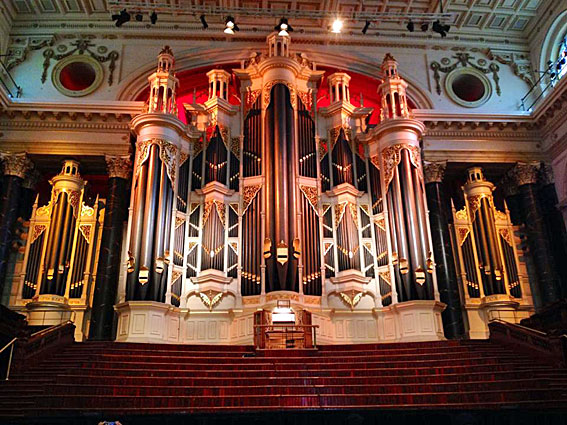 Upon completion, this was the grandest and most impressive civic complex in the British Empire and included the Centennial Hall, the largest of its kind.  The hall incorporates a massive ceiling in moulded zinc manufactured by the Sydney firm of Wunderlich, stained glass windows depicting Australian flora and a floor of Tasmanian blackwood and tallowwood.  The faux marble pillars were part of the original plans but only realised in the 1991 restoration.  The Hill & Son grand organ is the focal point of the hall and located in a massive elliptical cove. [1] 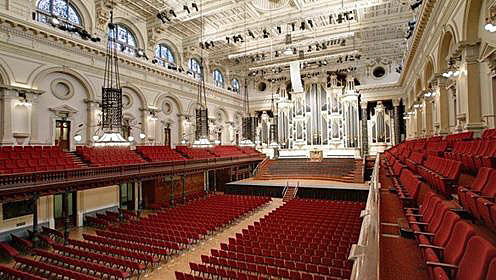 The history of the Town Hall organ has been very well documented and so will not be covered extensively here. [2]   Built between 1886 and 1889 by Hill & Son, of London (and not provided with a job number), the instrument was instantly famous for then being the world’s largest organ and for the novelty of its full-length 64-foot Contra Trombone stop.  It remains the world’s largest organ without any electric action components and is of international significance as representing the pinnacle of British achievement in the Victorian era, even though its conservative design was the subject of debate at the time. [3]   It is easily the best-known of all Australian organs and is the source of admiration around the world, not only for the immensity and opulence of its tone and for its magnificent case, but also for its high level of originality and the quality of the restoration work.

Although the organ is considered substantially original in condition, several changes have been made over the years.  The most significant of these was the lowering of the pitch to concert standard by S.T. Noad in 1939, this change being most noticeable in the reed stops, which are coarser in tone colour as a result.  A comprehensive restoration was undertaken over ten years from 1972 by Roger H. Pogson Pty Ltd and many of the minor changes (such as the swapping of ranks between Swell and Choir) were reversed.  Other changes retained to the present are the balanced swell pedals (the provision of which necessitated the removal of four composition pedals for the Great), the concave/radiating pedalboard, the transposition of Swell Piccolo from 2’ to 1’, the addition of the high-pitched Carillon bells to the Solo, the enclosure of the Solo orchestral reeds and the enclosure of the entire Choir division (originally only the reeds were enclosed). [4]   During the work carried out by Roger Pogson some alterations were made to the pneumatic action operating the Choir division and the console timbers (originally in fumed oak) were lightened during repolishing.

Live recordings can be downloaded as an mp3 file by clicking on the links below.


Demonstration of the 64' Contra Trombone played by Michael Dudman

Mechanical action with pneumatic-lever
assistance for Great and couplers
marked #

§ Metal bars from A#

^ German nomenclature (the use of the umlaut) has not been correctly engraved on these stops (viz. Röhr Flöte and

~ “Celestina” appears on the stopknob although “Celestino” appears in several published specifications of the organ. 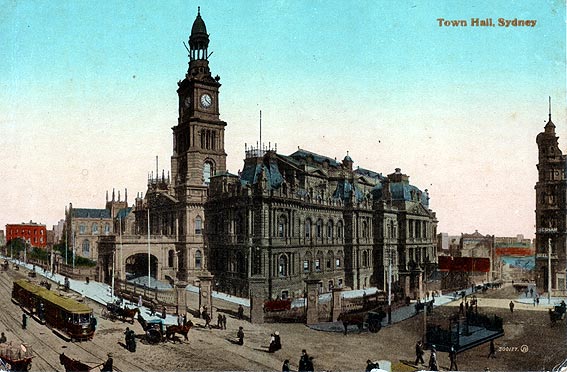 From a postcard c. the turn of the century
(before the construction of the underground railway)

The following images have been taken during the 2011 and continuing cleaning of the organ by Rodney Ford.

Echo fluework during cleaning, the Bassett Horn is yet to be reinstalled. 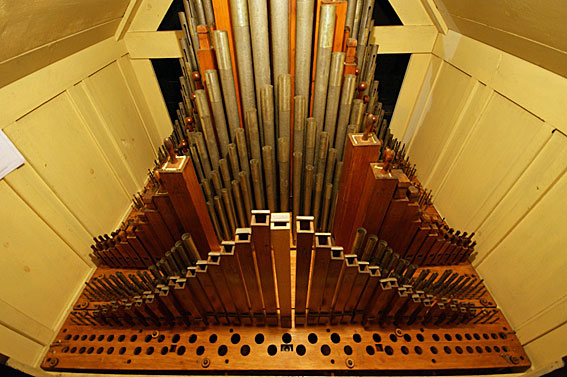 Another view of the Echo division. 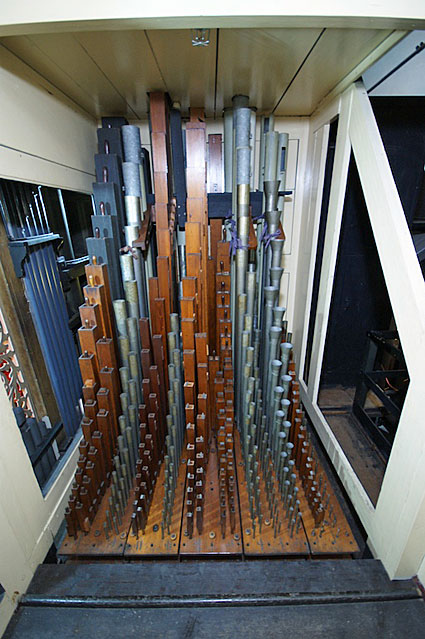 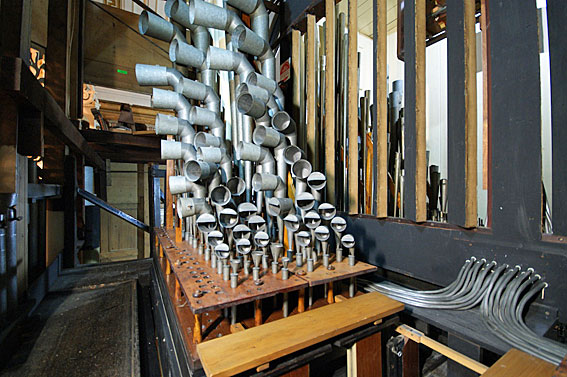 Solo Tubas, C side, during installation following cleaning. The Tuba Clarion 4 yet to be reinstalled. 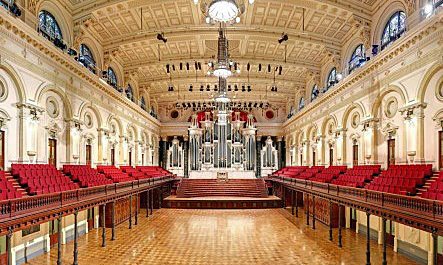 [2] A complete history of the construction and musical use of the Town Hall organ was written in 1999 by OHTA Patron, Robert Ampt, who has been City Organist since 1977.  The volume comprises 208 pages and is copiously illustrated, including numerous colour plates.  (Robert Ampt, The Sydney Town Hall Organ: William Hill and Son’s Magnum Opus [Woodford, NSW: Birralee Publishing, 1999].  The specification also originates from this source).