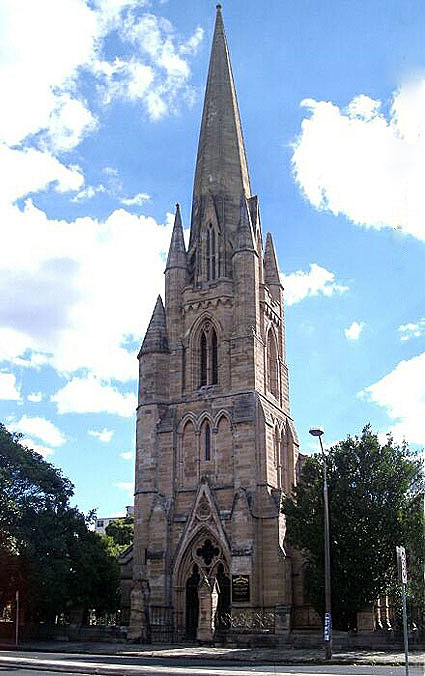 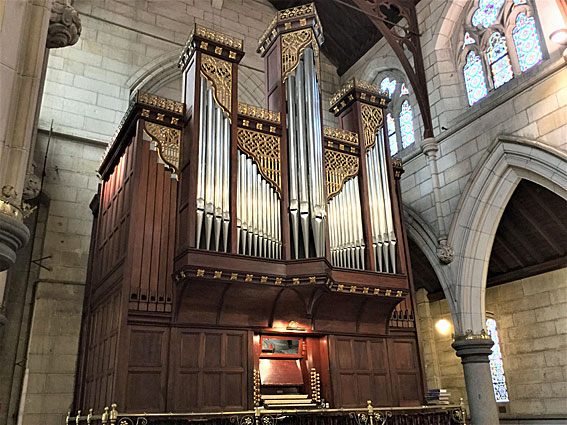 
The concrete foundations of the present church were laid in 1886 and the building opened on 23 February 1889.  The architects were Blacket Bros. (Cyril and Arthur Blacket).  It was commissioned by Helen Mackie Baillie in memory of her husband John Hunter Baillie (1818-1854) whose estate on her death in 1897 was valued at £52,035.

This white Pyrmont sandstone building in the Decorated Gothic style is among Sydney's most important 19th century architectural landmarks, with a breathtaking 182-feet high spire supported on flying buttresses.  It incorporates a clerestoried nave of six bays, aisles, transepts and a vestry placed externally to resemble a chancel.  The shafts of the internal columns are of Aberdeen granite with plinths and capitals of Victorian basalt; the brass coronets are part of the original gas lighting.  The pulpit and font are carved from Oamaru limestone and the timber furnishings are of lavish construction. [1]

The famous Hill & Son organ, standing on a raised platform at the rear of the church, is one of the best-preserved and most visually appealing instruments built by the firm in the last decade of the 19th century.  Its case, designed by Dr A.G. Hill, is reminiscent of the firms’ design for Chichester Cathedral, from 1888 and incorporates burnished tin façade pipes. Built in 1890 as job number 2078 at a cost of £1,200 (£850 for the organ and £350 for the 'ornate case front'), the organ was opened on 29 May 1892 by Sydney City Organist, Auguste Wiegand, who immediately advised on a range of modifications.  These included the transfer of the Swell Cornopean to the Great at 16-foot pitch, the provision of a Vox Humana 8’ to the Swell, the enclosure of the Choir division and the provision of American-style balanced “swell shoes”.  Later alterations included the swapping and/or transposition of ranks among the Swell and Choir divisions and, in 1967, the replacement of Wiegand’s Vox Humana with a Mixture III. [2]

In 1981 Roger H. Pogson returned most transposed ranks to their original positions and subsequent restoration work has been funded by several grants from the NSW Heritage Office and fund raising by the church. This work has been supervised by the church organist, Mr Ralph Lane in conjunction with Graeme Rushworth, and carried out in stages by Peter D.G. Jewkes Pty Ltd (in 1997, 2001 and 2003) and in the past year by Pipe Organ Reconstructions Pty Ltd.  This has included the provision of a new blower, restoration of the Choir, Great and Pedal soundboards, together with their pipework and actions, and restoration of the pedalboard.

The instrument was completely restored between the years 1997 and 2017 at the instigation, and under the supervision, of the church's organist Ralph Lane OAM.