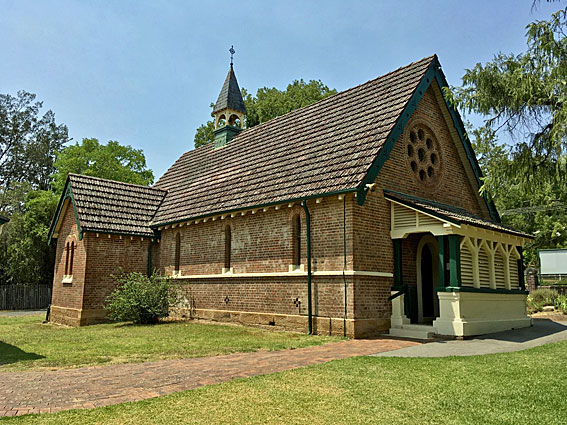 The Church of the Good Shepherd is located in one of the most beautiful settings of any church in the State, standing behind a small fence in a large field with a backdrop of distant mountains. The church was designed by John Horbury Hunt, in the period 1870-72, and was the first building completed in his own practice. It has a steeply pitched gabled roof, a vestry to the north façade and an exceptionally charming timber porch and gates on the west façade. The building contains many hallmarks of Horbury Hunt's style including the use of brick, the timbered ceiling, the window arrangements and the furnishings. The church is tiny yet presents the worshipper and visitor with a picture of absolute delight.

The organ, which was built in 1879 by J.W. Walker & Sons of London, adds considerably to the character of the building. It has remained utterly original, seldom even requiring tuning or other maintenance. As with other single manual Walker organs, it has given constant reliable service e to its owners for over a century and this is a great tribute to nineteenth century design and workmanship. In 1978 Roger H. Pogson carried out a restoration and it was noted that the cone-tuned pipes were in mint condition.

The instrument, although small, produces a very warm and satisfying sound which is perfectly adequate for the building. The Open Diapason (full compass) provides a rich and broad foundation tone and the Wald Flute has similar characteristics. The Dulciana is a restrained string of exceptional musical quality and the ear never tires of its sound. The Principal is bright and completes the limited chorus which is available. Whilst there is no 16' bass, the lowest octave of the Open Diapason is an excellent alternative and the instrument does not appear lacking in depth. All pipes are enclosed in a swell, controlled by a hold-down lever. The appearance of the organ with its quaintly carded seat is of great appeal. 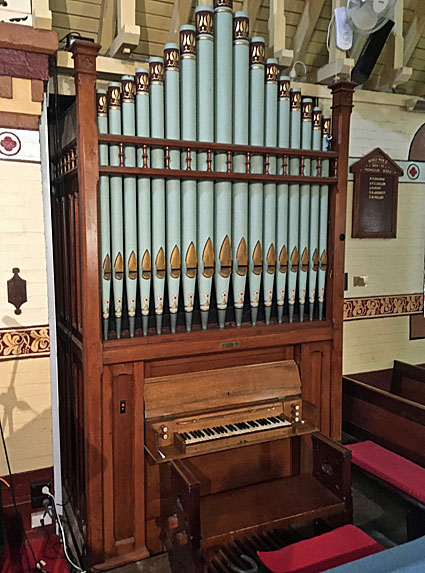 This instrument has a single manual clavier, with a compass of 56 notes, CC to g. Its pedal clavier has a compass of 20 notes, CC to g, arranged flat and parallel. There are no separate pedal pipes, the pedal keys being permanently coupled to the corresponding manual keys. It has a single slider and pallet windchest, controlled by drawstops, with pipe ranks as shown above.

In the absence of the bottom 7 pipes of the Open Diapason, this rank is grooved to sound the Stopped Diapason Bass. The lower 13 pipes of the Open Diapason and the lower 4 pipes of the Principal are displayed in one flat in the façade, all the remaining pipes being encased in a swell box. Having some pipes in the same rank enclosed and others not enclosed does involve some imbalance, but this seems to have been minimised by careful voicing. The original cone tuning has been faithfully retained, and it generally holds its tuning well.

The swell shutters are unbalanced, controlled by a lever type pedal and fall closed unless held open by the player's foot. Only a single notch is provided: which holds this pedal in the fully open position if desired. (lf one accidentally kicks it off this notch feeling for higher pedal notes, it will shut with a bang!).

Because of expensive past rodent damage, all practicable rodent access to this instrument's interior through its case when not in use has been closed. When not in use, we are thus careful to also leave the swell shutters closed. We realise this may cause some out-of-tune problems when major temperature variations occur, but experience has shown these soon go once the instrument is played for a while and all pipes approach the same temperature.

Fortunately, an electrically driven blower has been fitted in-lieu-of the original blowing lever and feeders (1978) and a concealed music lamp has been fitted (2007). The switch for this lamp can be felt on the lamp base behind the beam above the music desk, towards the left. Otherwise, this instrument appears to be in very original condition.