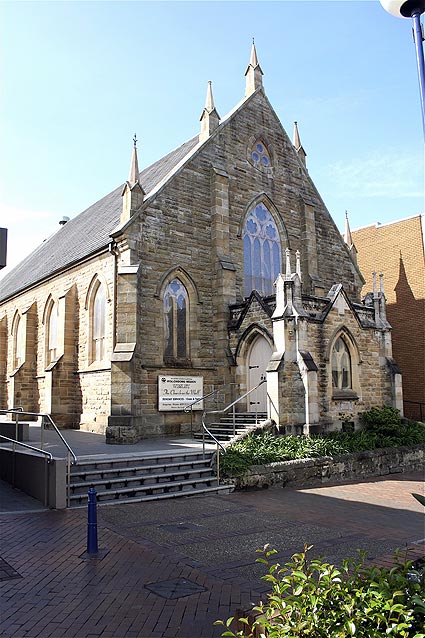 This organ is an unusual blend of nineteenth century English and Australian organbuilding and the installation represents a great success in terms of organ conservation.

Wesley Church stands in the centre of Crown Street, the busiest street in Wollongong. THe building, an imposing neo-gothic sandstone structure, was opened in 1882 and has served for over a century as the central church of the Methodist heritage in the Illawarra region. Today the church is a thriving part of the Wollongong Parish Mission with an extensive outreach in this section of the city.

The first pipe organ in Wesley Church was built in 1909 by Charles Richardson of Sydney. Originally built as a two-manaul tracker action instrument, the church elected to have it rebuilt in 1939 by Hill, Norman & Beard (Aust) Pty Ltd. The instrument became increasingly troublesome and in 1981 it was sold to a private buyer from the Queensland Gold Coast.

The present organ was built in 1871 by Henry Jones of London for the Wesleyan Church, Bourke Street, Surry Hills. It was actually the third organ Jones sent to the church, the first two having been lost in the shipwrecked vessels Walter Hood and City of Sydney. The Bourke Street Church was an exceptionally imposing building with a seating capacity of over 1,200 and the opening concert with massed choirs from neighbouring churches was reported as an unforgettable experience. [1]

The instrument was installed by William Davidson of Sydney. in 1878 Davidson was engaged to enlarge the instrument and the work entailed the provision of a larger case with inbuilt console, a new Swell soundboard and three more stops (Principal 4, Mixture III and Horn 8) to the Swell. The action was redeployed and the Swell placed above the Great. An Open Diapason was added to the Swell some time later. [2]

The instrument remained in its 1878 condition for many years and provided a thrilling accompaniment to services in the old church. In 1950 demographic changes caused the closure of the building for services and the organ lay dormant for almost 30 years. The Wesley Central Mission redeveloped the site as "Edward Eager Lodge", a hostel for homeless people,m in the late 1970s, but retaining the Bourke Street Church as a heritage item. The organ was redundant and moves made by Graeme Brown, Convenor of the Uniting Church Music Committee, resulted in the organ being purchased by Wesley Church Wollongong. The instrument had been stored by Pitchford & Garside in 1976, but the contract for restoring the organ and installing it at Wollongong was awarded to Brown & Arkley who completed the work in 1981. Daivd Kinsela was the consultant and the project was awarded a grant from the Heritage council of NSW. The instrument produces an exceptionally rich and brilliant sound, the Great chorus being some of the best work surviving from the 1870s. Whilst Henry Jones is not regarded as the most outstanding builder from the nineteenth century, this instrument is representative of this finest achievements and, couple with the fine work of William Davidson, makes an instrument of great beauty and worth. 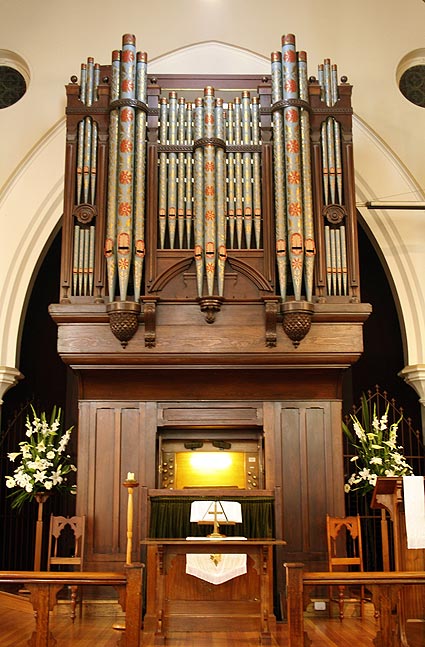