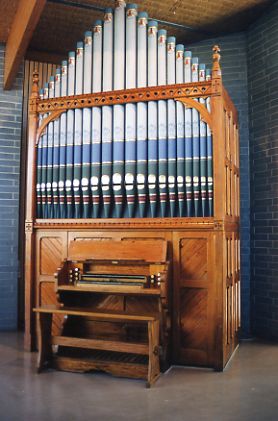 The organ was built for St Peter's Anglican Church, Upper Riccarton, Christchurch, New Zealand where it was installed by E.H. Jenkins and opened on 7 August 1879.

Initially installed in a chancel chamber, it was later removed to a chamber opening into the north transept. In the 1970s some unfortunate alterations were made by J. Strahan, but these have all been reversed in the present work. Fortunately a number of the components that had been removed had been acquired subsequently by the South Island Organ Company and these have fortuitously been repatriated within the organ, which now retains almost all of its original console fittings (drawstops, labels, nameplate and keyboards) together with all of the original pipework.

The instrument stands diagonally in a corner of the studio. The casework is particularly attractive, constructed from clear polished deal (pine) and comprising one central flat of 21 pipes with the typical Hill depressed arched mouths. The case posts are chamfered and carved with crosses, and surmounted by floriated finials. The impost rail is crenellated while the similarly crenellated transom rail has zig zag scribing and is pierced by holes. The façade pipes are decorated in light and pale blue, dark green, red and pink, with gilded mouths and banding.

This is an exceptionally charming and intact example of a small Hill organ of the period and joins comparable examples in Victoria from this illustrious firm at the residence of Dr WJ. Ralph, Mornington (1870: job no 1372) and St Augustine's Catholic Church, Yarraville (1872: job no 1450). 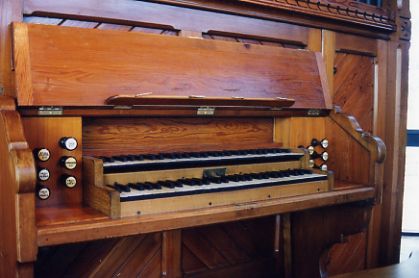