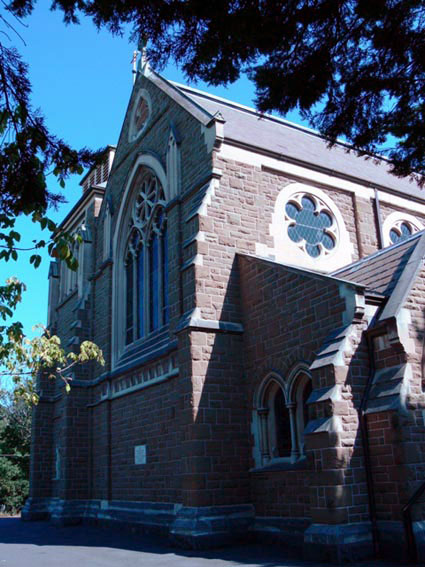 St James' Catholic Church, Gardenvale is highly regarded as one of Melbourne's finest and well-preserved Catholic parish churches. Situated on North Road, it is flanked by the imposing St James' Presbytery and surrounded by mature trees and extensive nature strips. Many large period and contemporary residences have been constructed on North Road to create a graceful setting.

THE MISSION OF BRIGHTON

The first Catholic church in the southern region of Melbourne was St Patrick's, Brighton. A wooden building facing Centre Road opened in 1848. (1) This was later replaced with a more substantial brick building and renamed St Finbar's, as the patronage of St Patrick was claimed for the Cathedral.(2) The Brighton church was home for the pastor of the Mission of Brighton. This vast area covered all the territory south of the Yarra from Emerald Hill to the Mornington Peninsula and to the east into Gippsland. (3) In 1876 the Revd Matthew Carey was appointed to the Mission of Brighton. In 1883 the Mission was divided up into parishes and Fr Carey's was named Elsternwick under the patronage of St James the Great. (4)

Fr Carey was a man of extraordinary vision and competence. He was later given the distinguished title of Monsignor and was appointed as Vicar General of the Archdiocese of Melbourne in 1926 by Archbishop Mannix. (5) Fr Carey's vision saw a fine church for Elsternwick, the nave of which was constructed in 1891 to the design of architect Edgar J Henderson. The transepts and sanctuary were finished in 1924, designed by Schreiber and Jorgensen. Of special note is the elaborate 1934 decoration of the sanctuary which includes Roman mosaic flooring and opus sectile tiling. (6) The marble altars and altar rails are also worthy of mention. Unfortunately, part of the altar rail was smashed beyond repair only two years ago by a madman. Fr Carey was appointed to the parish of West Melbourne in 1898. (7) He oversaw the final stages of construction of the splendid church of St Mary Star of the Sea. He was no doubt involved with the installation of the significant three-manual Fincham organ in the west gallery. 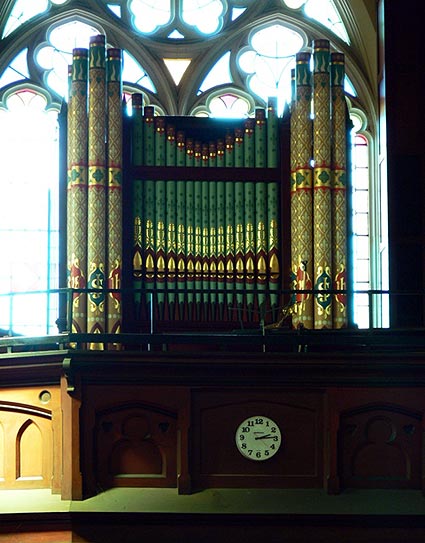 Fr Michael C. Gough succeeded Fr Carey at Elsternwick. On Sunday 29 June 1902, the feast of Ss Peter and Paul, he spoke to his congregation at the conclusion of High Mass to mark the inauguration of the new organ. The Catholic newspaper, The Advocate, records his comments as follows:

"'...addressing his people in regard to the new organ, said that its want had been felt for some time. It was fitting that no expense should be spared in providing an instrument worthy to sound the praises of God. The cost with the additions to the gallery was about £400. He knew that the uniform generosity of the congregation would soon discharge that debt....The collection was liberally responded to, the handsome sum of £180 being acknowledged by Fr. Gough, who thanked all for their generous contributions." (8)

The celebrations for the inauguration of the new organ began with a High Mass sung by Fr Carey which included a choral mass setting (Mozart's 12th Mass) operatic soloists and a choir augmented with singers from Middle Park, Brunswick and Albert Park parishes. Afterwards the choir and some visiting clergy were treated to lunch.

The Advocate goes on to describe an evening service with sermon, although little detail is provided. Most likely this would have been either choral benediction or Solemn Vespers.

It is reported that the new organ, "was built by Mr Anderson at a cost of £350." (9) It has been noted, however, that the organ has many characteristics of Alfred Fuller's instruments. Indeed John Stiller's detailed documentation on this instrument is titled Documentation of Pipe Organ by Alfred Fuller 1891 by John Stiller for the Organ Historical Trust of Australia May 1980. (10) The sliding console cover itself and the glass knobs are a feature of Fuller organs. (11) It has also been observed that the console profile is identical to that of the 1890 Fuller organ at St John's Catholic Church, Heidelberg. However, the façade pipes are richly decorated in a distinctive pattern typical of Anderson's style. (12) This conflicting evidence regarding the builder of this instrument has prompted discussion on exactly how much of this organ was made by Fuller. An internal examination of this instrument was the only way to answer this question.

The organ is installed in a gallery at the liturgical west of the church.

The organ gave trouble free service for most of the twentieth century. The church records show a payment of $3,294 made to Fincham & Sons on 8 June 1978 but provide no details. (13) Perhaps this was for the reliable blower by B.O.B. Fans Ltd, which is still in use, or cleaning of the organ. From 1982-1988 John S. Parker (Melbourne) carried out a number of tonal additions to the organ. Electric contacts were placed under the pedals and the swell keyboard. An Open Wood 16 (from the 1922 Fincham organ at the former Methodist Church, Epping Street, East Malvern) was added to the pedal and the pipes placed either side of the organ against the gallery wall. A Trumpet rank was mounted en chamade on top of the swell box and was quite unsightly. The Great Dulciana was discarded at this time and the Flute 4 was moved to this slide. Veneers were attached to the upperboard and rackboard in the Flute 4 position and a Mixture II was installed.

In April 2001 a contract was signed with Stewart Organs for the restoration of the St James' organ. The decision to undertake a full restoration was prompted by the collapse of the bellows in December 2000 as a result of perished leather. The scope of the work included the complete restoration of the original organ. This involved restoration of the soundboards, repair of the action, replacement of leather buttons and cloth bushings, overhaul of the keyboards and Swell to Great coupler, overhaul of the non-original pedalboard, pipe repairs (most of the metal flue ranks retain their cone tuning), removal of the Mixture II, the removal of the veneers on the Great and the restoration of the correct sequence of ranks. As the Dulciana had been discarded some time in the 1980s it was decided to replace it with a string rank in keeping with the style of the organ. The Cone Gamba 8 from the 1888 Fuller organ at St Mark's, Fawkner was replicated for this purpose. As the Great Flute 4 lost its bass octave in the 1980s an additional 12 pipes were provided. Similarly, the Swell Oboe 8 (originally to tneor C) had its bottom octave completed. The casework was repaired and French polished.

The scope of the work included the retention of the two ranks on electric action. A scheme was devised for sympathetic installation with the additional ranks installed separate from the original organ. The 16 Trumpet rank was installed very compactly in its own new swell-box with new electric chests. This swell-box was installed on the rear wall of the church adjacent to the organ and enclosed in its own case with panelling to a design sympathetic with the original organ case. The Open Wood was repainted black, the chests overhauled and similarly encased on the other side of the original organ. Completely new solid-state electric action was installed within the Open Wood case so that only minimal wiring is present on the original organ. Solid wooden trunking to the additional ranks is finished in 'Fuller Red' in keeping with the rest of the organ. The shutter mechanism for the Trumpet swell-box is connected to the original trigger swell pedal so that both boxes operate in tandem. The stop tabs for the Open Wood and Trumpet are on a sliding wooden drawer under the key-desk on the left side of the console. A new brass shell shade lamp was installed on the console. The organist's mirror which was previously fixed to the case has been removed. Switches for the blower and light have been fixed out of sight under the key desk.

ORIGINS OF THE ORGAN

Ken Falconer of Stewart Organs has been able to provide the following details concerning the origins of this unusual organ. The Great soundboard and the Great Open Diapason were almost certainly built by Alfred Fuller as was the centre of the facade and main construction of the console. The Swell and Pedal chests while similar in design to Fuller's work but are of inferior workmanship and are almost certainly Anderson. The rest of the pipework, including the remaining Great ranks, were most likely provided by Anderson. The rollerboards, being constructed from iron are most likely Anderson as Fuller was using timber rollerboards at this time. (14) Indeed, Ken believes that the majority of the organ was constructed by Anderson.

The beautiful stencilling of the façade pipes was restored by Christine Holmes and Marc Nobel. It was noted during this work that the central flat had another older design which had been painted over by Anderson. (15) The two outer towers of the facade did not have this design. This is further evidence that the central part of the organ including the Great soundboard was originally constructed by Fuller.

An important aspect of this project was its scope to include not only the organ but the whole of the choir area. The stairs to the gallery are quite steep and narrow and were covered in worn carpet. A rubber safety tread was fitted to the stairs along with aluminium nosing. The removal of the carpet not only improved the visibility of the edge of the steps but increased the depth of the tread. The carpet was also removed from the gallery and an industrial vinyl floor covering installed. Unsightly wiring attached to the PA system, lighting and power outlets have also been reinstalled sympathetically.

The restoration of the organ is the 'crown' on many years of work preserving this beautiful church and its fittings. The first Restoration Committee met in 1980 to discuss the work the church building required at that time. When it became obvious that work was required on the organ for the organist, Gabrielle Mercer, and the parishioners there was no option but to restore this important part of their church. As Fr Gough said at organ's inauguration in 1902, "It was fitting that no expense should be spared in providing an instrument worthy to sound the praises of God."

The organ of St James' was re-dedicated and blessed by Parish Priest Fr Geoffrey Baron on 17 December 2001 during the Carol Service. The re-opening concert will be given by Thomas Heywood on Friday 5 April 2002 at 8:00 pm in the organ's centenary year. 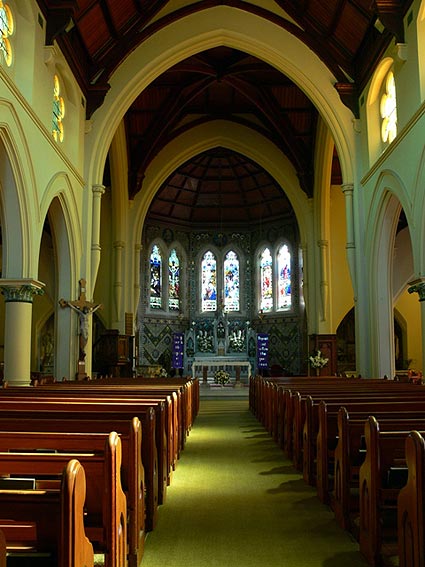 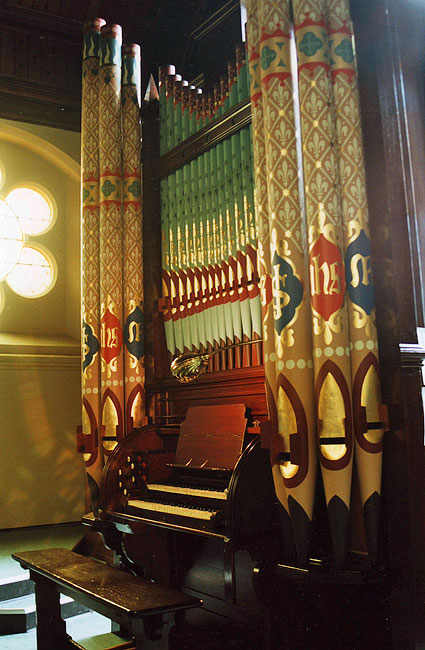