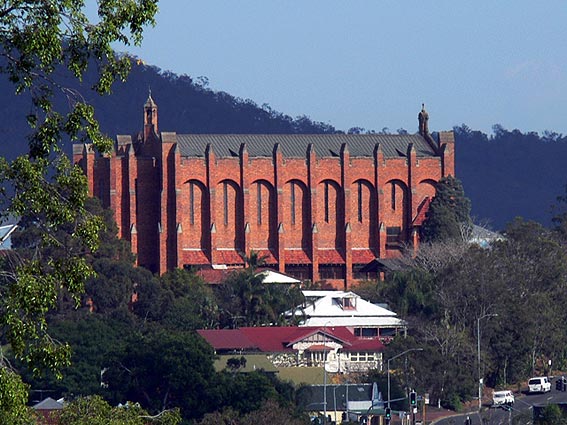 
The present St Brigid's Church replaced an earlier stone structure built in 1877.1 It has been described as 'Brisbane's finest ecclesiastical building', the only other contenders for the title being St John's Cathedral and St Andrew's Uniting Church in the city.2 A massive red brick structure, the building enjoys a commanding position, overlooking the city. It was built between 1912 and 1914 to the design of the Australian architect, Robin Dods, a partner in the Brisbane firm, Hall & Dods.

Its appearance stems from the directive of the Church Committee who commissioned Dods to design a church like the Cathedral at Albi [in France]. . . .The essential fortress-like character of St Brigid's was unavoidable, therefore, as this was the major characteristic of "Albi". . . . While in the spirit of "Albi", Dods' creation is not a replica. Although inescapably cast in the Gothic idiom, ornamentation has been reduced to a minimum and the architect has succeeded in creating contemporary imagery in both choice of materials - red brick walls and grey tiled roof - and in its powerful form, the latter evidenced by tall supporting buttresses and infill brick panels penetrated by narrow windows and topped by projecting arched spandrels.3

The case of the organ (of polished silky oak) was designed by the architect to conform with the church architecture.4 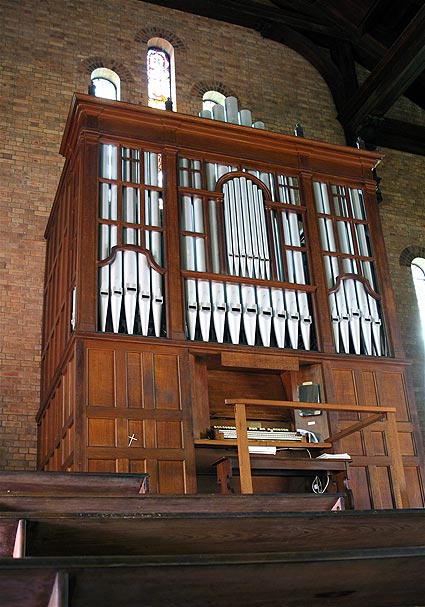 The contract for building the organ had been awarded to B.B. Whitehouse & Co. of Brisbane by November 1913, when the following details were published, drawing special attention to the use of tubular-pneumatic action and the inclusion of a crescendo pedal:

Messrs B. B. Whitehouse and Co., of Brisbane, have been intrusted with the building of a new pipe organ for St. Brigid's Church, Red Hill. The specifications for this instrument are is follows: -

Three pistons to great organ. Three pistons to swell organ. Balanced swell pedal. Balanced pedal for crescendo and diminuendo. The wind will be supplied by an electric rotary blower. The key and pedal action, draw stop action, couplers, and all accessories will be worked by the latest improved system of tubular pneumatics. The crescendo and diminuendo balance pedal is quite a new invention and it will be the first introduced into this State.5

The instrument was opened, along with the church itself, on Sunday 9 August 1914.6 For many years, until the firm ceased operation in 1982, this organ enjoyed the advantage of close proximity to the builder's workshop, which was situated on the opposite side of Musgrave Road from 1921, when the name Whitehouse Bros was adopted. Placed in the west gallery of this reverberant church, the instrument is heard to maximum advantage, and it is regarded as one of the firm's most notable instruments of the period.

This was one of the earliest organs by the Whitehouse firm to use pneumatic action. The chests are of the cone-pallet variety, fed by single-rise bellows. The firm had used cone-pallet chests as early as 1910 in the small instrument at the Methodist Church, Nundah, but this was one of the earliest of their major instruments to use them. It was followed by the slightly larger pneumatic-action instrument at the Baptist City Tabernacle, Brisbane, in January 1915 (3 manuals, 20 stops), and others of comparable size at St Mary's Catholic Church, Ipswich, in October 1915 (2 manuals, 19 stops), West End Methodist Church in 1924 (2 manuals, 19 stops) and the Masonic Temple, Brisbane, in 1930 (2 manuals, 20 stops).

As is true of other Whitehouse organs of the period and earlier, the pipework appears to derive from A. Palmer & Son of London, and the console fittings from Thomas Harrison of London. The console at Red Hill is unusual in that it has stopkeys (of the triangular-block type) although the angled jambs are apparently designed as if for drawstops. 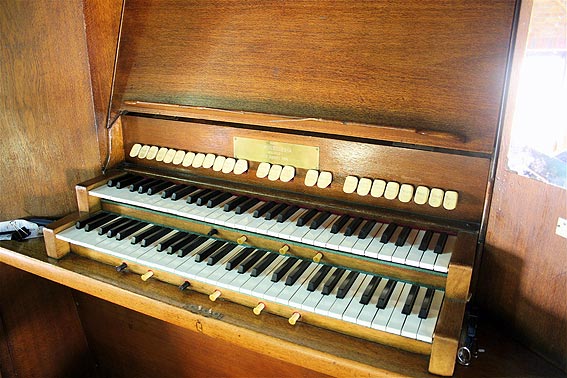 Substantial refurbishment of the organ was undertaken in 1994-95 by H.W. Jarrott of Brisbane,7 and a complete restoration was carried out in 2001-02 by W.J. Simon Pierce.8 The latter included replacement of all the puffers and cones of the cone-pallet soundboards, and extensive remedial work on the soundboards. Cone tuning was retained where possible, although it was found necessary to fit slides to the Fifteenth 2ft, the Piccolo 2ft, and the top octave of the Gemshorn 4ft and Principal 4ft. The wind pressure was raised slightly to achieve optimum speech of both flues and reeds.9

3 The Heritage of Australia: The Illustrated Register of the National Estate (South Melbourne: Macmillan, 1981), vol. 4, p. 20. 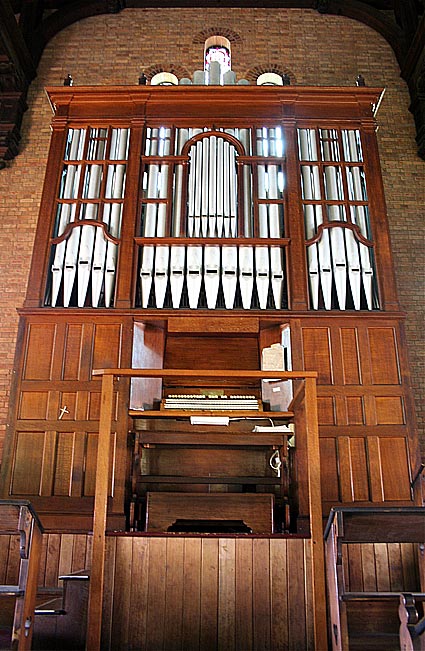 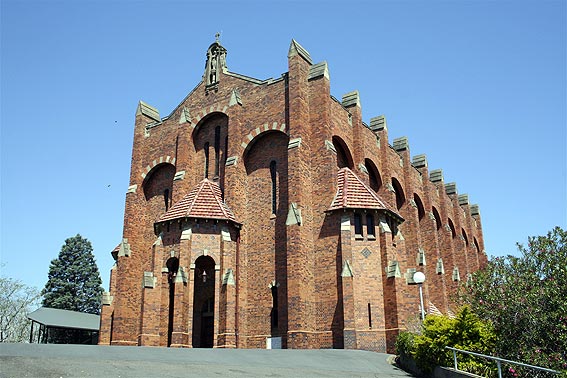 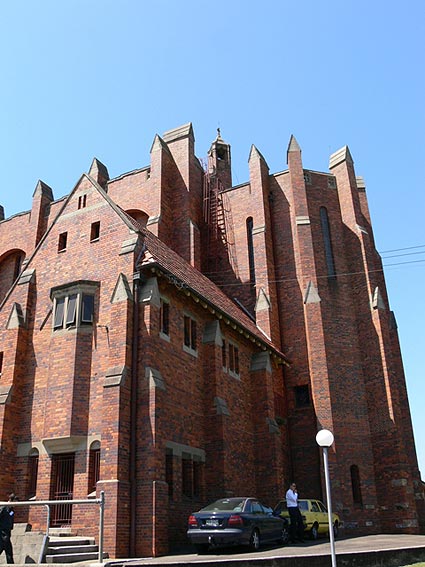 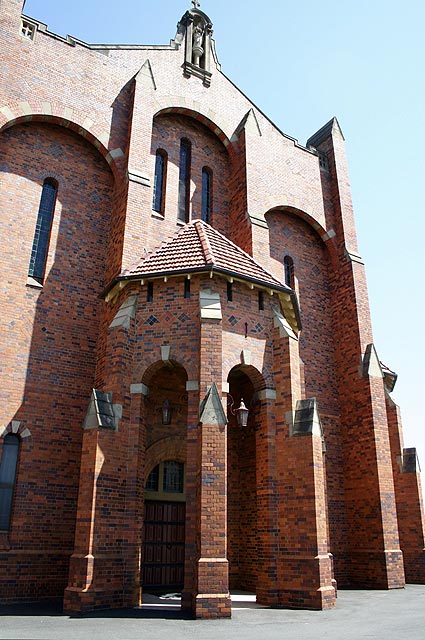 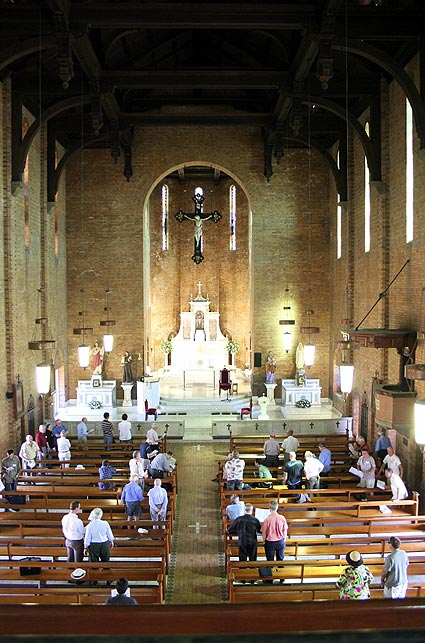