NOTES ON THE RESTORATION OF THE ASTOR BARREL ORGAN
Marc Nobel

(A paper delivered as part of the OHTA 25th Annual Conference, on 20 September 2002 at the Queen Victoria Museum & Art Gallery, Launceston and published in OHTA News January 2003)

The history of the Astor family is as long as it is famous. Originally from Waldorf, Heidelberg, the family moved to England in 1778. John Jacob Astor, the younger brother, travelled to Baltimore in 1783, taking with him a stock of flutes to sell. Remaining in London, George Astor established himself as a music instrument maker at 26 Wych Street, Drury Lane, in 1794.

In 1798 George moved to 79 Cornhill Road to establish music publishing along with his new Instrument Manufactory. In 1800, the Astors made and supplied musical instruments to His Majesty's Army and the next year trading commenced as George Astor & Co. From intact labels on the three barrels we can be sure that the date of the Astor barrel organ is between 1801 and 1815. After this date, Astor and Horwood became partners.

The Astor family went on to many greater things in both England and America. The Waldorf Astoria Hotel in New York, named after their place of origin, was established a century later by a Colonel John Jacob Astor who also financed an electromagnetic eccentric called Nicola Tesla. Tesla's research into robotry in the 1890s, and the wireless transmission of power and intelligence, was to herald their future involvement in radio and television. Ironically, the barrel organ takes up no more room than the later television sets! The organ measures 25" wide by 17&Mac178" deep and stands 56&Mac178" tall.

The surviving parts were for many years at Ross High School and after a few changes of hands came into my possession. Owing to the rarity and luxury of such instruments, there could never have been very many about.

Captain Samuel Horton left Lincolnshire to emigrate to Tasmania. In 1823 he built his home in Ross and called it 'Somercoates'. It is known that Captain Horton possessed a barrel organ, later giving it to the Methodist Chapel which was built in 1838. It is believed that, much later, the pipes and mechanism were removed from the organ and the case made into an attractive writing desk which still survives to this day. As all these conditions fit, it is highly likely that the remaining parts are from Captain Horton's organ.

Apart from three surviving barrels containing a total of 30 tunes, the original stand survives, but with a replaced door. Remnants of the bellows and reservoir, a brass crank, a metal elbow, a key frame mechanism, nine of 13 original façade pipes, 11 of 15 stickers, two wooden bearings and a small assortment of odds and ends survive.

Unbelievably, there was only just enough information contained in the surviving parts that if one more part had been lost, reconstruction would have been nearly impossible. I estimate that 1,200 hours have been spent on researching and reconstruction. The barrels are in a fragile condition; further study and work is needed.

The most important parts of the organ are the barrels. They are, in fact, the only example of recorded music from the early 19th century. They render a performance exactly as heard by Captain Horton, playing all the embellishments and ornaments in the common performance practice of the day.

The discrepancy between musical notation and how it is actually played make the barrels of particular musicological value. The organ, in fact, is merely a means to play the surviving records. As yet, only two tunes are recognized, God Save the King and Rule Britannia. The two smaller barrels contain mostly jigs, reels, hornpipes, etc. Four of the 30 tunes are without percussion, although the speed is fast, and I imagine these are likely to be hymns.

The organ probably had five stops and they are Drum, St. Diapason, Principal, Fifteenth and Triangle.

I look forward to the expertise of others in the deciphering of the music and study of the barrels.

Without the support of a donor intensely interested in this project, it would not have been realised and I would like to acknowledge the assistance and encouragement provided over many months. 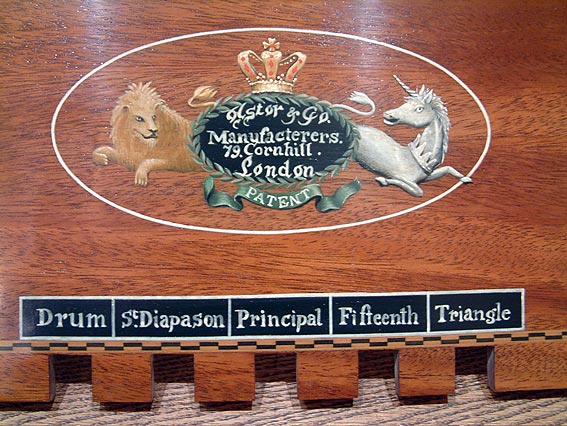