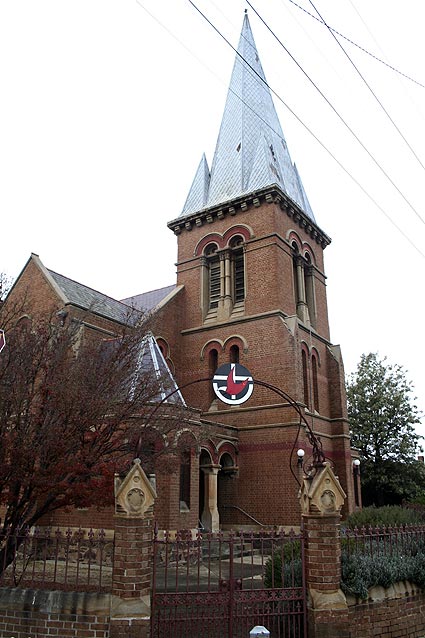 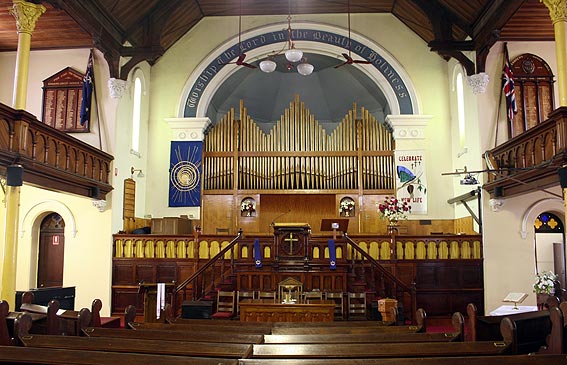 According to Rushworth (Historic Organs of NSW p.330), this organ was one of only two organs to be imported to Australia by the firm of Wadsworth Bros (the other being for St Paul's Anglican Church, Maryborough, Queensland). Both no longer survive in their original condition. This organ was built in 1886 and erected in 1888 [a church pamphlet says 1886 - see also newspaper article below]. It had two manuals and 17 stops, with mechanical action. The Great had seven stops, the Swell eight, and the Pedal two. There were four couplers and five combination pedals. The number of pipes was 963.

The original specification was:


In 1891 it was placed in a chamber at the front of the church and in the 1930s it is thought to have been widened at either side. In 1956 S.T. Noad & Son rebuilt it with new windchests on electro-pneumatic action and with a detached console. The number of stops remained at 17 although some rearrangement of pipework occured. The instrument is in a poor state and an electronic organ is now used with its speakers mounted inside the organ case. The Noad console is also being stored within the organ case. 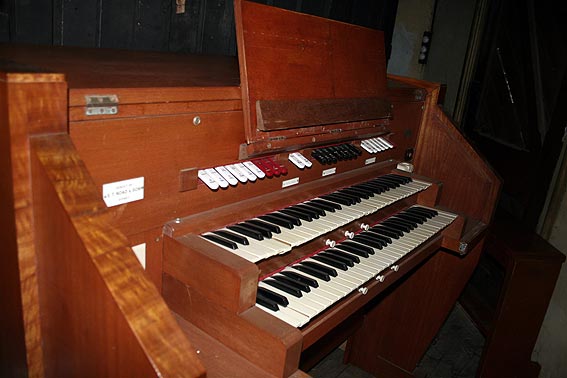 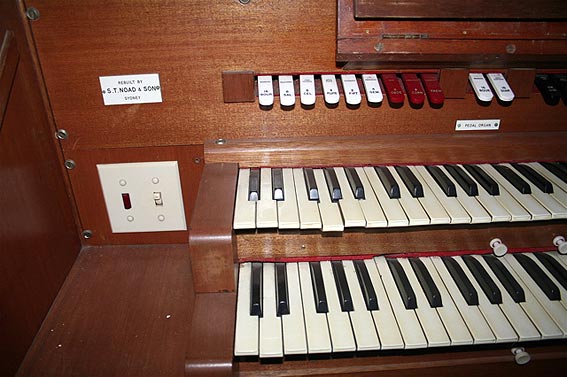 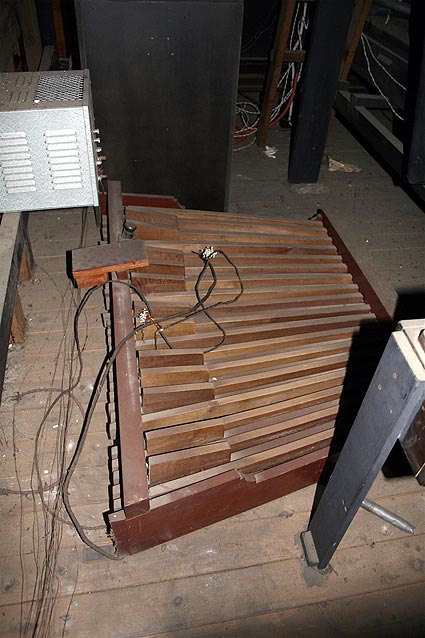 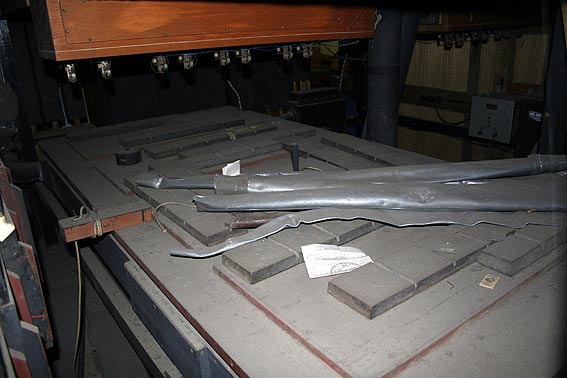 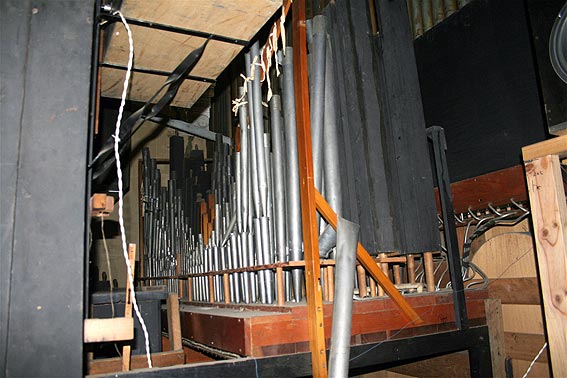 Great Division Pipes from Bass Side 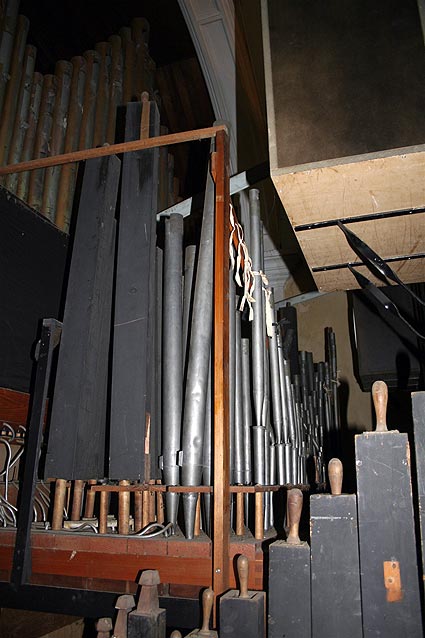 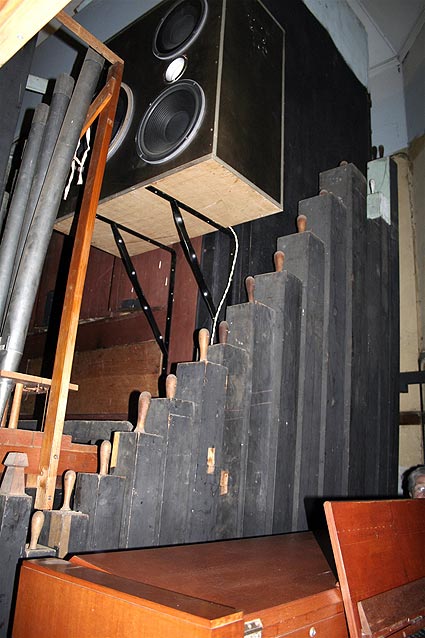 A note from Bruce Guy:

I got my information from the Goulburn Evening Post of 24/8/1886. It states that the organ was officially opened on Friday, 20 August 1886. I think when we celebrated the centenary of the organ we did it in 1988, but a local historian corrected us and referred us to the paper article. I have attached a transcription of the article. Some of the original was poor, hence some writing in red where I couldn't make out words.


The Wesleyans of this city have furnished their church in Goldsmith Street with a new organ, which has been built to their order by Messrs. Wadsworth Brothers of Manchester for the price of £410, and the total cost of which, with cartage, duty and erection, will amount to about £600. To accommodate the instrument the rostrum has been moved forward, and a platform resting on brick piers has been built in the chancel at the north end of the building. Three tiers of pews intended to be occupied by the choir have likewise been made on each side of the organ; the effect of the whole being to make the internal fittings of the church look very complete. The instrument will stand upon a firm foundation. It is in a good position for sound, and as the acoustic properties of the church are good, its sweet sound is heard to advantage, and it is at once recognised as a vast improvement upon the reed instrument it supersedes. The instrument has two manuals - swell and great. The great manual has seven stops, viz.:- Open diapason, Hohl flute, gamba, dulciana, principal, harmonic flute and fifteenth. The swell manual has eight stops, viz.:- Lieblich bourdon, spitz flöte, salicional, vox celeste, gemshorn, mixture two ranks, horn, and oboe. The pedal organ has two stops, viz:- Open diapason and bourdon; four couplers, viz:- great to pedals, swell to pedals, swell to great sub-octave , and swell to great: composition pedals, three to great and three to swell. Total number of pipes, 964.The instrument has an oak case with decorated front pipes and has been erected by Mr. T. Matanle. The old organ has been purchased from the trustees of the church by the Sunday- school and will be shortly erected in the lecture hall to be used for school purposes, for which it is well adapted.

On Friday evening the formal opening of the new organ took place with a recital of sacred instrumental music by Mr. F.W. Harmer, organist of St. Saviour's cathedral, and Miss H.K. Conley, organist to the Wesleyan church, Newtown, the recital being interspersed with renderings of sacred songs. There was a numerous attendance, the body of the church and the galleries being well filled.

The Rev. G. Martin presided, and made a few preliminary remarks, during which he said that he thought the instrument would meet with the approval of the most fastidious and that it would assist in the promotion of their service of praise in connection with public worship. He regretted that Mr. Rendall, who had been appointed organist to the church, had been prevented from leaving Sydney through family affliction. The organ was not yet complete; the pipes had to be decorated. It would be used for the services on Sunday and he would preach sermons appropriate to those occasions. They were deeply indebted to Mr. Harmer for his kindness in giving them his assistance. He would now call upon that gentleman to formally open the organ by playing the first piece upon the programme.

Mr. Harmer, with the ability that is so well known to be his characteristic, played Bach's Toccata et Fugue (in D minor) and also during the recital "Serenade" by Hummall, "Andante in G" by Batiste, and the "March Romaine" by Gounod.

Miss Conley played with taste "Andante in F" by Wely, "Cuius Animam" by Rossini, a "Melody in F" by J. Hodgson, and "March in C", "St. Polycarp", by Ouseley; and, although the organ is more of a gentleman's instrument than a lady's, her performance won applause from even the critical portion of the audience.

The vocal portion of the programme comprised an anthem, "O! Taste and See" by Goss, performed by a choir composed of members of several of the church choirs in the city. Their rendering of this piece was awarded applause. Mr. G. Tingcombe sang the solo, "There is a Green Hill" by Gounod, and was applauded, but this gentleman has been on a previous occasion heard to greater advantage in the same solo. Mrs. Sach sang sweetly "The Lost Chord" and was applauded. The programme closed with Handel's "Hallelujah Chorus" from the Messiah, in which the female voices sounded rather weak, but on the whole it was fairly rendered. Mr. Whitehead acted as conductor with his accustomed ability and Mr. Harmer accompanied the vocalists upon the organ. A third solo was upon the programme, but the Chairman apologised for the absence of the singer, Mr. Martin, who was detained in Sydney by business.

Mr. W. Davies on behalf of the trustees thanked those who had assisted in the recital, more particularly Miss Conley, Mr. Harmer, and the members of the choirs of other churches. He trusted that the gathering at the sacred concert on Monday evening would be even larger than the one that evening.

The congregations worship services on Sunday were well attended, particularly in the morning. Miss H.K. Conley presided at the organ, and the singing was full of heartiness and culture. The organ is a great addition to the church and the congregation have every reason to be satisfied with the performance of the instrument. The Rev. G. Martin preached in the morning from the 145th psalm on the Service of Praise, and in the evening from the 3rd verse of the 14th chapter of Revelations on the New Song.

Last evening a sacred concert was held in the church and was numerously attended. Solos were rendered by Miss L.G. Foxall of Sydney, soprano; Mrs. Sach, contralto; Mr. Whitehead, tenor; and Mr. Tingcombe, baritone. Two anthems, and the "Hallelujah Chorus" from the Messiah were given by the choir, and instrumental pieces upon the organ were performed by Miss H.K. Conley, organist of the Wesleyan church, Newtown; Mr. F.W. Harmer, organist of St. Saviour's cathedral; and Mr. B. Pickersgill of St. Andrew's Presbyterian church. Mr. Whitehead wielded the baton as conductor, and Mr. Harmer played the accompaniments.