In 1978 Paul Coles of Forbes purchased a one manual organ from David Fincham, Melbourne which has the following specification:

An Organ for Forbes Town Hall 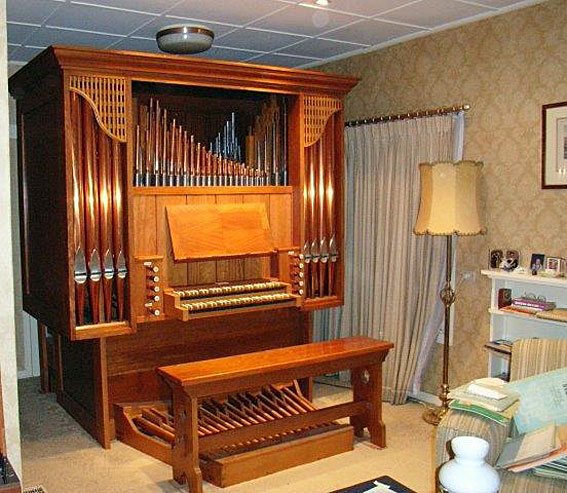 The following is a slightly edited version of the report in March 2014 of Mr Richard Morgan, Director of Tourism, Community and Cultural Development for the Shire of Forbes, NSW to the Services Committee of the Shire Council. Richard Morgan was formerly Headmaster of Pittwater House Grammar School and is a Society member.

Offer of donation to Council

Former Forbes Shire Councillor Mr Paul Coles has offered his classical pipe organ as a donation to the Council. The instrument has been inspected by the Mayor, Deputy Mayor and Director of Tourism Community and Cultural Development in Mr Coles' home and the Director (who is an organist) played the instrument and demonstrated its capability.

The organ was built by the organ building firm of Brown & Arkley in 1981 in Northmead specifically for Mr Coles to use in Forbes. Mr Coles provided a number of organ parts from his collection, including some of the metal pipes that were made in Germany, and the organ was constructed using mechanical action parts mostly made of wood along historic lines. The casework was built of Amora, a South East Asian mahogany-like hardwood no longer commercially available and veneered side panels of sapele mahogany. The instrument was installed in a small concert room above Paul's Forbes Builders, Mitre 10 hardware store (now Mezzanine). During the time it was in this location Mr Coles sponsored a number of visits by leading concert organists who performed to a packed room of local music enthusiasts. There would be many people in Forbes who still have fond memories of these occasions. With the close of the hardware store the organ was moved into Mr Coles' home. The organ has genuinely been part of Forbes' cultural life for over thirty years and would be a fine musical asset to have in a public space in the town.

Significance and value to the community

This instrument is in near-perfect condition and would be a magnificent addition to the Forbes Town Hall. An organ of this quality would cost about $250,000 to build today. The offer by Mr Coles should therefore be seen as quite generous. This will become a significant asset of the Council.

The organ, being relatively new and built from high quality materials to exacting standards, has long-lasting cultural value. It is estimated that it will entertain Town Hall patrons with minimal annual maintenance for the next eighty years.

Musically it has the versatility to provide for civic occasions, classical and jazz concerts and will become a 'talking point' for visitors to the Town Hall, especially amongst enthusiasts of fine music. This organ is not the usual town hall organ. It was conceived as a chamber instrument along classical lines. However at concerts in its former location it proved to be more than capable of handling music from various periods including large romantic works. In the more resonant setting of the Town Hall with hard timber floors this organ should sound better than ever before.

The organ will also be an educational asset to the region. It has been built in the classical tradition and is entirely mechanical apart from the electric blower. This provides the opportunity for technical students to see and experience superior craftsmanship and the application of mechanical action in a unique musical instrument. It might also be used for the teaching of keyboard studies in conjunction with the Lachlan Conservatorium of Music and other regionally-based music tuition providers.

Positioning of the organ has been examined by Director of Tourism, Community and Cultural Development and the Director of Environment and Planning Services with help from their staff. There is enough room to place the instrument on a small raised platform (2.6 x 2.1 m) on the south side of the stage on a part of the auditorium floor that has only occasional use. The organ would obscure the single exit door at the stage-end of the auditorium. This door is rarely used and can be deadlocked. There are enough remaining exits to satisfy the relevant building codes along the southern and eastern walls and from the stage. The organ will also partly obscure the statue of Venus with Lamp in the niche on the left side of the stage.

The project of moving the organ would involve two technicians travelling to Forbes. The organ would be dismantled in Mr Coles' residence ready for transporting. Council could provide transport for the organ parts and assistance from two staff periodically for lifting of the heavy parts of the organ.

The organ can be reassembled in the Town Hall. New leather buttons and felts would be used in the reassembly where old ones have been removed. Numerous parts of the action would not need to be disassembled so the leather and felt in these sections would still be in good condition and will last undisturbed up to eighty years.

The voicing of this organ emphasizes the higher frequencies in true classical style. The voicing of that end of the tonal spectrum will be more than adequate in the Town Hall. It is proposed that the wind pressure be raised slightly and that the 8ft Gedacht stop and the 4ft Principal stop be made a little louder better to underpin the bright upper work. This extra voicing would take up to a week. Raising the wind pressure has a flow on effect to the whole organ which needs to be addressed but the extra work of undertaking the revoicing throughout will ensure that the organ is voiced better to suit the new location. Special care needs to be given to the reed pipes of the copper Krumhorn. Each pipe would be taken apart and cleaned out. On completion the whole organ would need to be fine tuned.

A quote has been received from Ian D Brown and Associates of Ballina (Mr Brown was one part of Brown & Arkley in 1981 and he undertakes regular pipe organ maintenance in the Central West). The quote for the work to this stage is $15,900.00 plus GST. This is subject to a detailed inspection of the organ for a formal quote.

There is a need to add a keyboard cover and doors to enclose the pipes above the keyboard. The cost for fitting of the doors would be $3,950.00 plus GST. The keyboard cover is problematic and cannot be costed until the organ builder has thoroughly inspected the instrument and made an assessment of options available.

There is an annual cost for tuning and preventative maintenance of approximately $400. This can be completed when the organ tuner is on one of his 'rounds' of church organ tuning in the Central West.