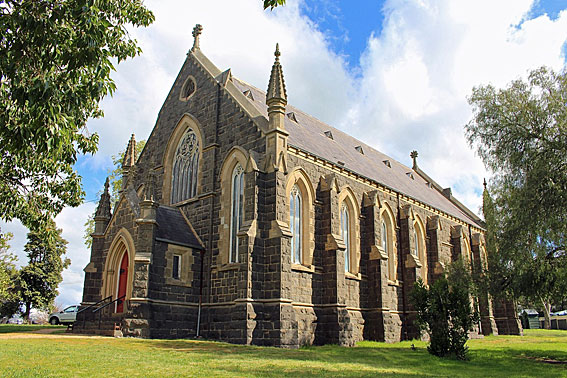 The former church was built in 1859-60 on a different site, in Fraser Street, and as a single nave. It was subsequently extended with transepts and was moved to the present site to become a Sunday school. Its principal interest lies in the external skin of board and batten treatment seen rarely in Victoria, but more common in New Zealand and North America, used here with Tudor label moulds over the openings. There are also early painted finishes surviving internally, including an ornamental stencilled dado band.

The later church, built in 1870-71 of bluestone with cement dressings, is in the Decorated Gothic mode, and is the only identifiable Australian work of the architect Thomas Austin of Austin and Johnson, an able protege of the famous English Gothicist Sir George Gilbert Scott.1 It consists of a large and broad nave and porch. The intended sanctuary and vestry have not been constructed. 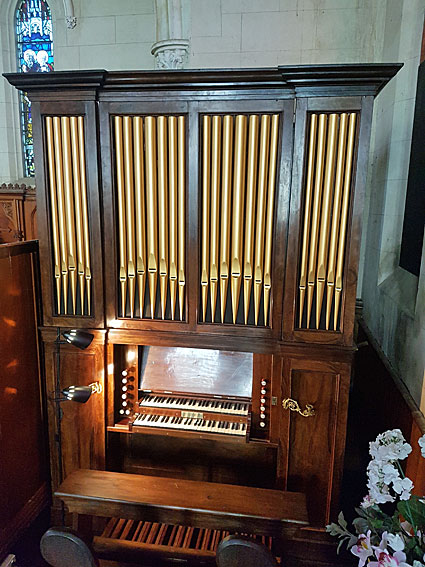 
The organ was built by Hamlin & Son, 8 Brook Street, Euston Road, London, around 1860. Robert Hamlin was a former employee of Hill & Son and this instrument bears characteristics of their work, particularly the two tapered ranks in the Swell Organ and style of drawstop engraving. The only instrument by the Hamlins known to survive in Great Britain is at Holy Trinity, Torbryan, Devon.2 The firm sent out two organs to Victoria, one a two- manual instrument initially placed in the Baptist Church, Collins Street, Melbourne, opened in 1859, and the second, now at Clunes, for a private residence. When it was installed at the Wesleyan (Methodist) Church, Daylesford in March 1881, it was stated that "it was manufactured at the express order and under the personal supervision of a Melbourne gentleman who intended it for his son, but the young man died before it arrived and the instrument has remained unused. The timber in the organ has had 15 years seasoning."3

In 1888 the organ was sold to St Paul's, Clunes and erected by William Anderson at a cost of £200.00, this including the addition of a small-scale Pedal Bourdon at the rear of the instrument.4 The instrument was dedicated on 30 August 1888.5

Apart from the addition of an electrical blower outside the church (a source of considerable anxiety in summer when it delivered hot, dry air to the instrument) and inappropriate electrical fittings on the console, the instrument remains in a remarkable state of originality, retaining all of its original action and pipework. The organ is of interest for its overall intactness, classical style casework in veneered walnut, with gold-leafed dummy facade pipes, highly attractive bright sound in a fine acoustic, and its attractive console fittings. The organ has many characteristics of the work of the Hill firm: similar stop engraving, the use of tapered ranks on the Swell – even cast iron bellows weights with the initial "H". The Swell is only to Tenor C, the Great manual is retractable to enable the console doors to close, and its overall dimensions are modest.

Australian Pipe Organs Pty Ltd, directed by Daniel Bittner, has carried out an extensive restoration in 2018, assisted by a major grant from the Vera Moore Foundation. The work has consisted of the following:

• Releathering of the double-rise reservoir and feeders
• Installation of a new silent blower in a silencing cabinet behind the organ
• Moving the organ forward around one metre to allow space for the blower
• Repair and refinishing of the casework, constructed unusually in veneered walnut – many of the case panels have been reassembled from dissected fragments and the whole cleaned and wax polished
• The wooden dummy façade pipes have been refinished in high quality gold paint
• Complete restoration of the two slider chests which had suffered badly from runnings, especially in summer – these have been flooded with glue and surfaces planed and refitted, and pallets have been recovered in new leather
• The mechanical key and stop actions have been fully overhauled
• The wooden pipes have been checked for any leakage and repaired
• The metal pipes have been fitted with tuning slides owing to their deteriorated condition and manufacture from a high lead percentage metal which is very soft
• The console has been fully refurbished, damage rectified, electrical fittings removed, manual keys cleaned, the pedal board recapped in new timber and the original stop labels reaffixed (some were found beneath the organ)6 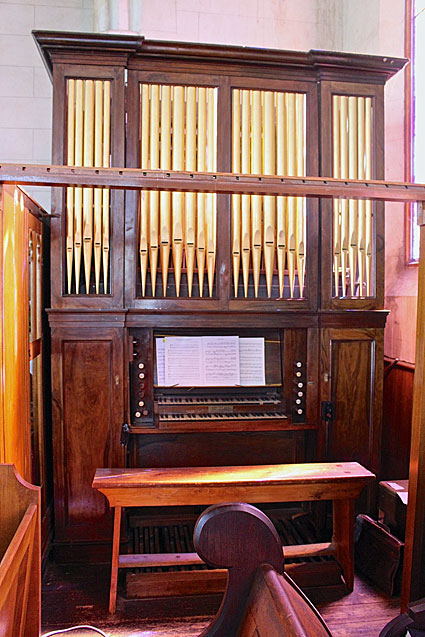 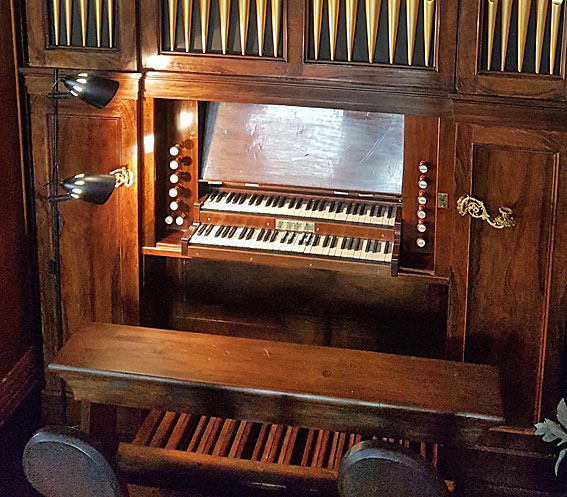 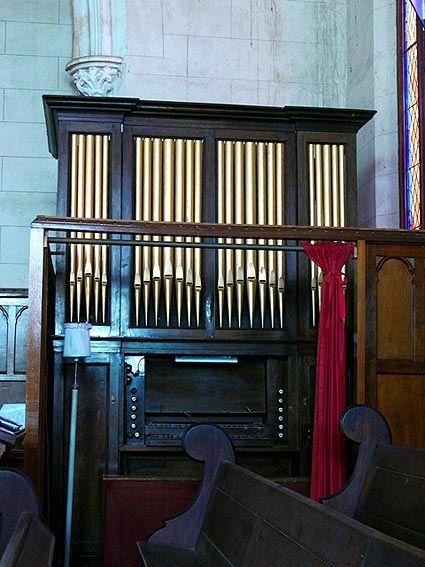 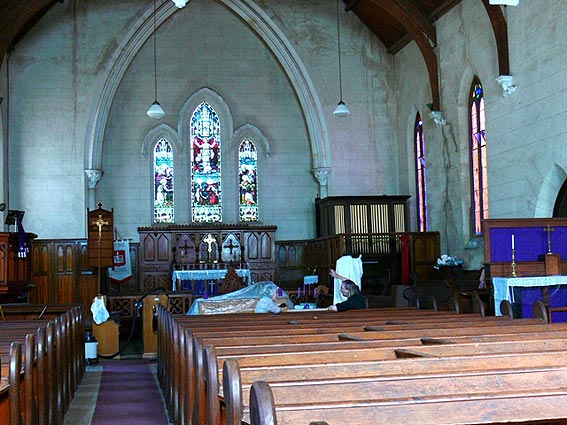 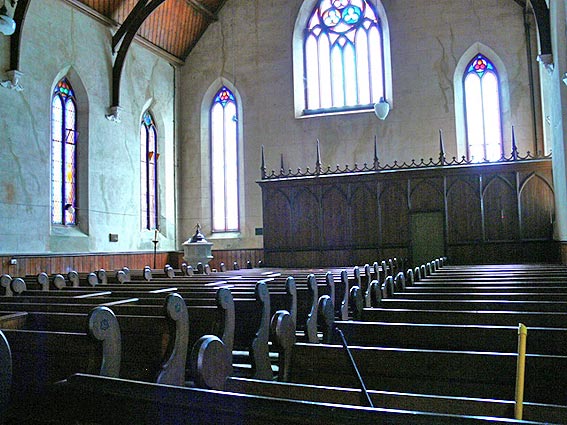 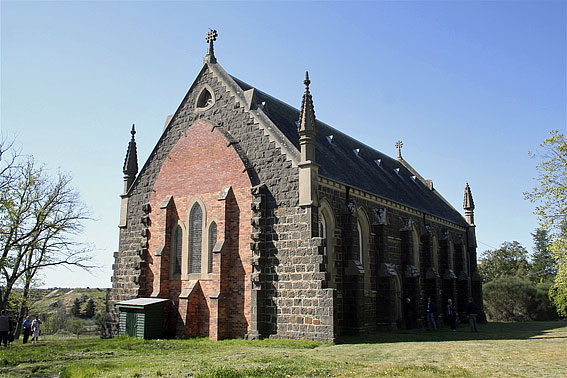 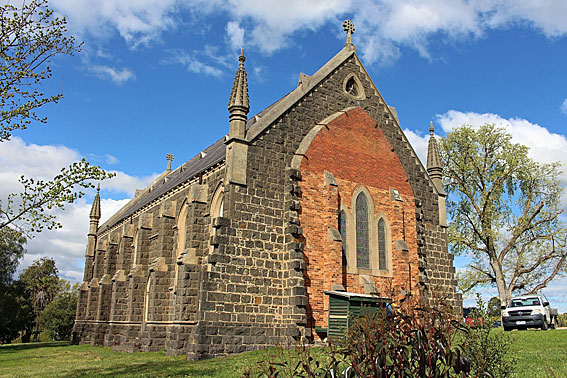 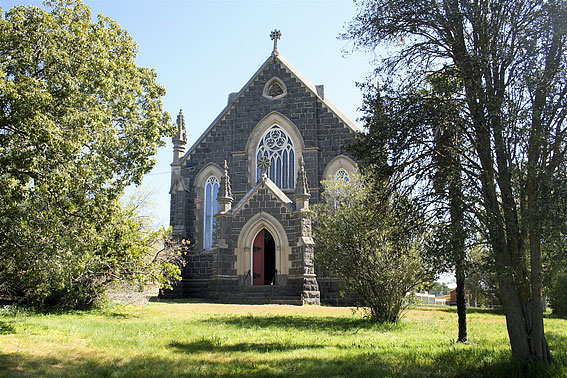 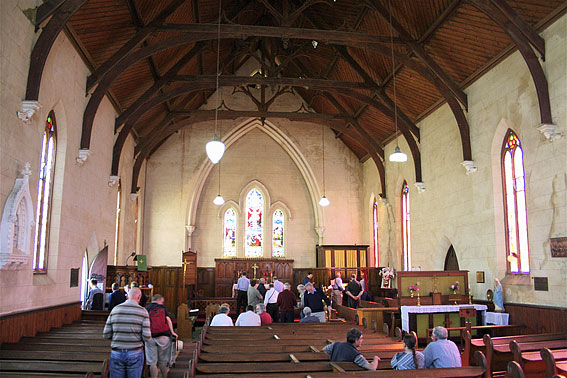