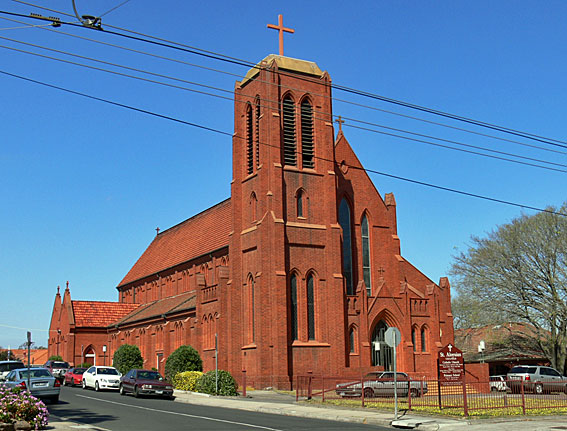 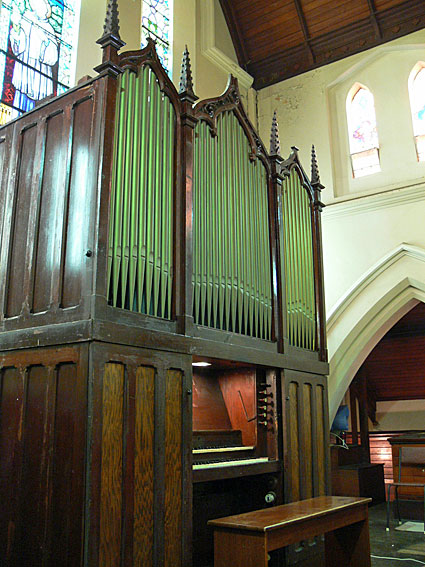 St Aloysius' Church was built in 1923-24 at a cost of £13,200 to the designs of Bartholomew Moriarty, who is also known as the builder who constructed Newman College for the architect Walter Burley Griffin. The foundation stone was laid on 18 August 1923 and the building completed in May 1924. It is constructed in red brick, with terra cotta tiles for the roofs. The style is a simplified version of Early-English Gothic, with the nave and apsidal sanctuary placed under a common roof ridge. The building consists of a nave of seven bays, with aisles and clerestory, sanctuary, side chapels and sacristies, one of which was initially built as a nuns choir. Sadly the impressive 140ft high spire which crowned the tower to the left of the main facade was demolished early in 1990 owing to delamination of the concrete.

The building was praised at the time of its construction for its "Gothic copyism" which ran counter to the prevailing Romanesque style adopted by the Catholic Church for its buildings in Melbourne. The style was chosen by the Parish Priest, Fr John Aloysius O'Brien, who had been trained at Maynooth Seminary in Ireland, which has a very prominent Gothic chapel. It is 150ft long and 52ft 6 in wide across the aisles.

The first organ in St Aloysius' Church was built by Keith M. Lavers, who was a local resident in Caulfield. It was a two-manual electric-action extension organ of 10 ranks and was performed upon by noted organist Horace Weber in December 1927. It was removed before 1935 and moved to St Luke's Anglican Church, Mosman, NSW and was later broken up. One must speculate whether its installation at St Aloysius' Church was a speculative venture on Lavers' part and that the church either didn't wish to keep the instrument, or couldn't afford its retention.

The present pipe organ was installed late in 2010 by Wakeley Pipe Organs Pty Ltd. The reservoir (apparently converted to single-rise) and feeders were earlier releathered by George Stephens in South Australia together with restoration of the tubular-pneumatic pedal action. The casework has been badly handled in the past with varnish and gold paint applied over original finishes. The original brass nameplate has been removed. However, it sounds very fine indeed in a splendid acoustic. It has been installed centrally in the rear gallery.

The instrument was built by Johann Wilhelm Wolff, the noted South Australian organbuilder. It was opened at the Wesleyan Church, Port Adelaide on 13 May 1880. There is an account of this in the South Australian Register for 14 May 1880:

WESLEYAN CHURCH, PORT ADELAIDE – An opening concert was given in this church on Thursday night, May 13, in aid of a New Organ Fund. There was an ambitious programme and an appreciative audience. The organ, which occupies the recess at the back of the church, is a handsome addition to the furniture. It is a two-manual organ, having fifty-six notes, ranging through the double D's to G. The great organ has five stops, the swell four, there are two cupolas [sic], and the bourdone [sic] has two octaves of twenty-four notes. Mr. J. W. Wolff, of Adelaide, was the builder and the invoice price was £250; other expenses bring the price to £300.


The Port Adelaide News 15 May 1880 also reported the opening:


Opening of the new organ at the Port Wesleyan Church.

A fortnight ago we published a paragraph notifying that a new organ had been purchased by the trustees of the Port Wesleyan Church, through the efforts principally of Mr J Bennett, who assisted by two ladies of the congregation raised, we understand, nearly £100. The cost of the organ which was built by and purchased from Mr Woolfe, of Adelaide, is £250, and its erection and incidental costs will absorb £50 more – thus leaving a debt of £200. The case of the instrument is constructed in the Gothic style, and, with its ornamental pipe work, it presents a very handsome appearance, and relieves somewhat the sombreness of the by no means attractive church. The organ, which has powerful though mellow tone, is briefly described by Mr Woolfe as a two manual one, with a range of two C's to G – 56 notes; great organ five stops; and swell organ, 4: two cupolas, boudore, two octaves. On Thursday evening last the formal opening of the organ was celebrated by a Sacred Concert which was fairly attended …

· The placement of the Great drawstops in a single column on the left side of the console and the Swell drawstops on the right;
· The inclusion of the unique Suavial (harkening back to its builder's Germanic background – a small scale wooden Lieblich Gedackt with narrow mouths), a wooden string rank (Salicet) and flutes mainly with inverted upper lips except the Suavial;
· The inclusion of seven ranks of wooden pipework including the Great Open Diapason;
· The casework, which has three flats of (originally) gilt dummy wooden pipes placed within three flats with carved ogival Gothic canopies; three of the finials have been removed.
· The pedal board is easily removed and operates the action via 'jacks'.

The overall sound is very distinctive, clear and bright, and impressive, belying its small size. It is enhanced by the adoption of a subtle unequal temperament.


* These three ranks have a common open wood bass


The organ is of very high historical and musical significance as one of only two two-manual organs built by J.W. Wolff to survive intact, the other being the instrument built in 1880 - for the Wesleyan Church, Norwood, SA and currently located at the Church of Christ, Grote Street, Adelaide. This is slightly larger, although with casework of less distinction than the Caulfield organ. Sadly, most of Wolff's instruments have been rebuilt and altered, or destroyed, particularly the fine and intact instrument of 1879 that was in St Luke's Anglican Church, Whitmore Square, Adelaide until destroyed by fire in April 1992.

The layout of the instrument is particularly interesting. The TC Swell windchest is placed centrally. The box has horizontal shutters opening upwards and is tuned from the rear through a removable flap; the windchest is laid out chromatically. The Great windchest is split on either side of the Swell, C to the left and C# to the right with the longest pipes adjacent to the side walls of the swell box. The windchest pallets are opened through stickers pushing upwards; the pallet boxes are laid across the rear of the instrument at impost level. The only comparable example of such a layout in the local context is an organ built in 1893 by Thomas Atterton, now at the Benedictine Monastery, Arcadia, NSW. The longer pipes of the Great open common bass are located at floor level and fed by wooden conveyances. The wooden ranks all have adequate speaking room with gaps on the windchests on either side to afford proper speech. The swell action is splayed, avoiding the use of a roller board.

The wooden pipes plug directly into the upperboards. The three metal ranks have been fitted with tuning slides.

This is a very rare and unusual instrument. 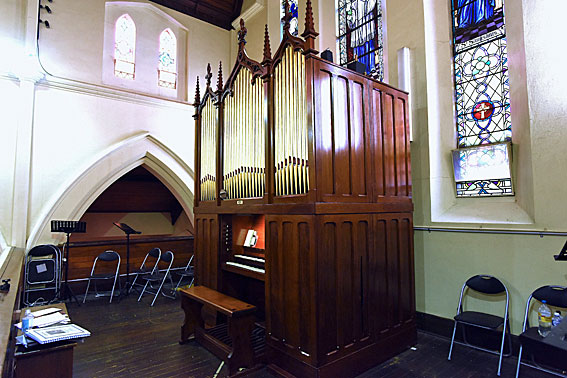 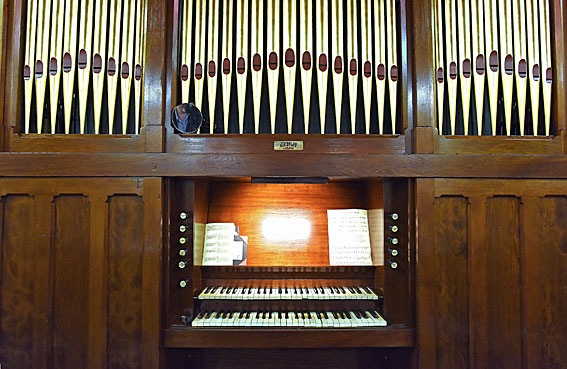 The instrument has just received a comprehensive restoration by Hargraves Pipe Organs Pty Ltd.  The restoration appeal has been sponsored by the Organ Historical Trust of Australia and the consultant was John Maidment.

·        The key actions have been carefully restored, especially to alleviate lateral play and to provide improved support for the action squares.

·        The slider windchests have been overhauled.

·        The wooden pipework has been carefully checked for any damage, with original cut-ups lowered where these have been subsequently raised.

·        The casework has been extensively repaired and re-polished, cleaning back accumulated layers of thick varnish, two new finials of fleur-de-lys shape were carved to surmount the outer flats and a third recycled from a bench end formerly at St Mary's, North Melbourne.

·        The dummy wooden façade pipes have been re-gilded with painted mouths, as per the original scheme.

·        A facsimile brass nameplate has been provided to replace one that had been removed:  it was copied from the plate on the rebuilt 1878 Wolff organ at the Uniting Church, Balaklava, SA inspected during the 2013 OHTA conference.

·        The keyboards have been carefully conserved and missing or damaged ivories replaced with recycled material.

·        The reservoir and feeders have been releathered.

This is the only example of a Wolff instrument so far to sustain a detailed restoration.

The restored organ was re-dedicated by Bishop Peter Elliott on Sunday 8 October 2017 and a recital was given afterwards by Christopher Cook. 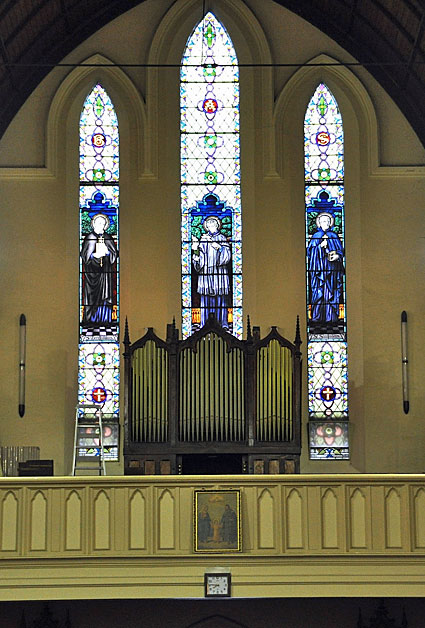 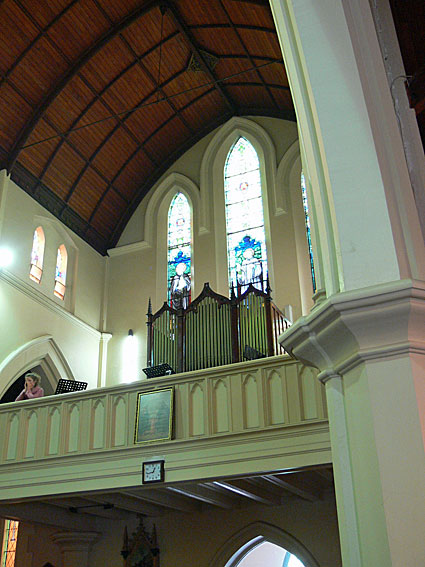 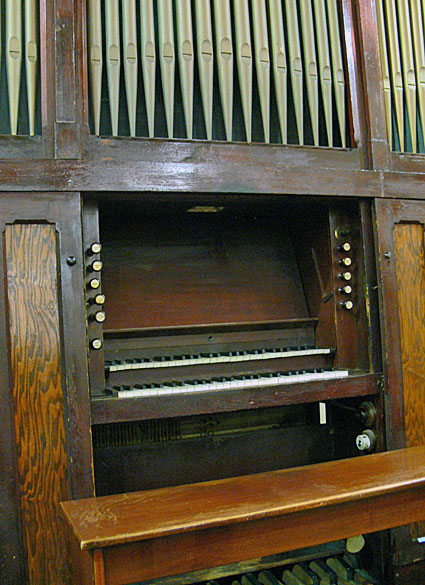 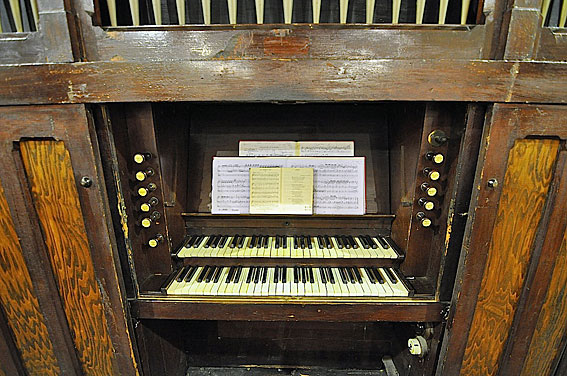 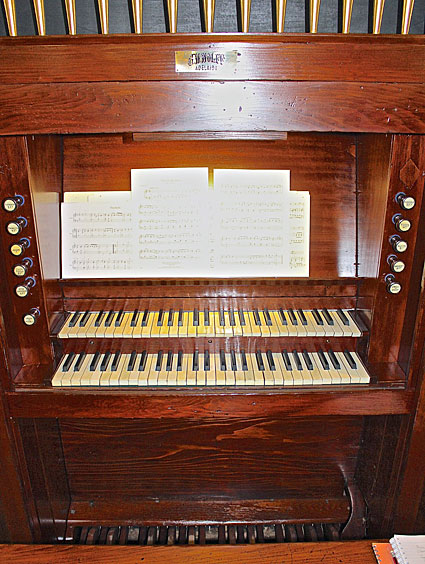 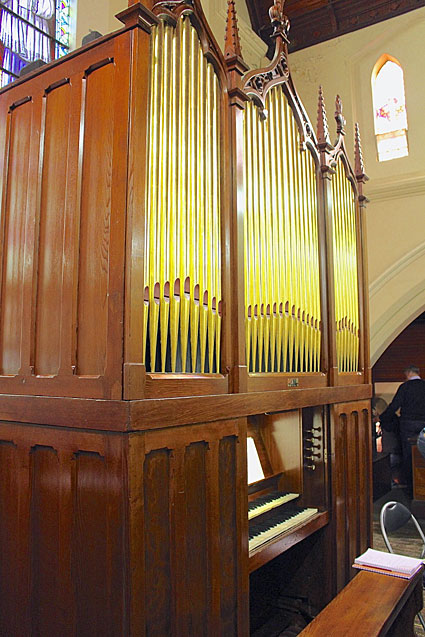 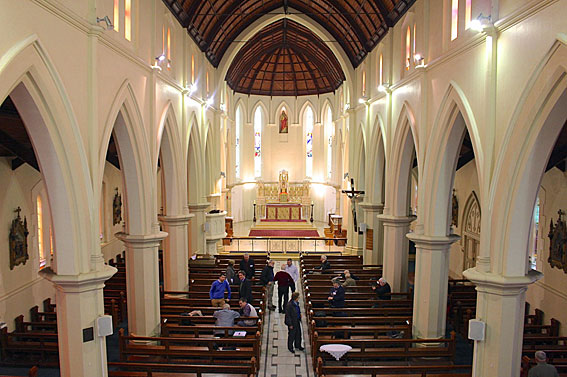 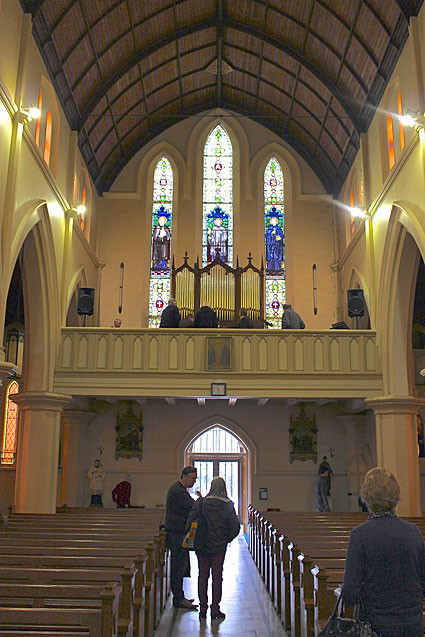 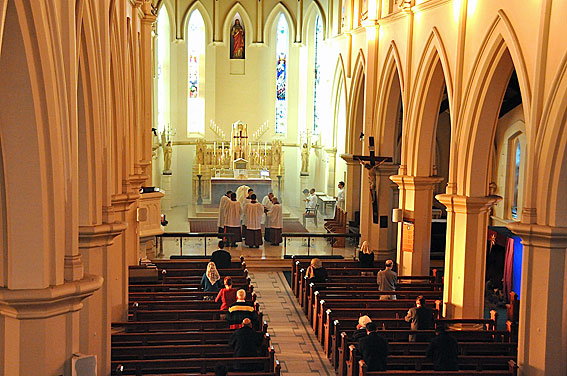 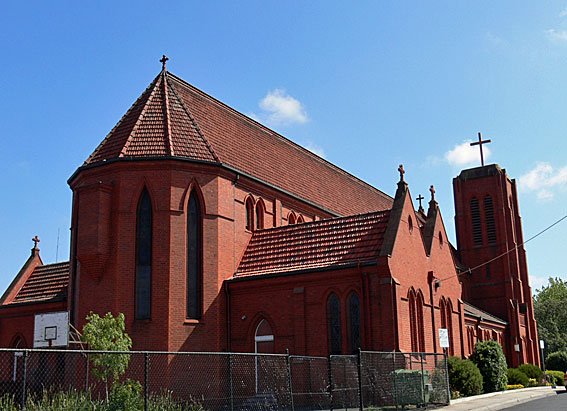 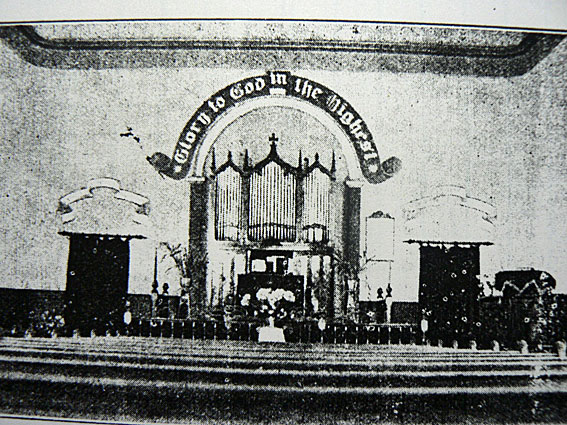 The Wolff organ at Medindie Congregational Church, SA
from the 1932 church history (courtesy of David Shield).

All other photos above: John Maidment (Dec 2010) 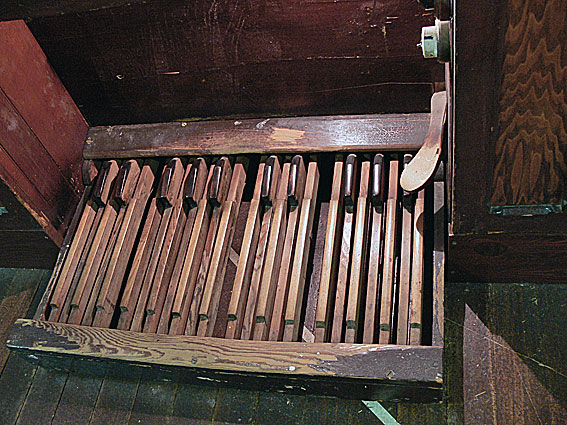 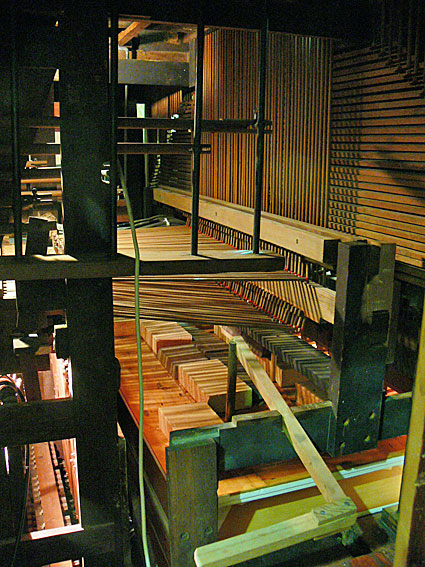 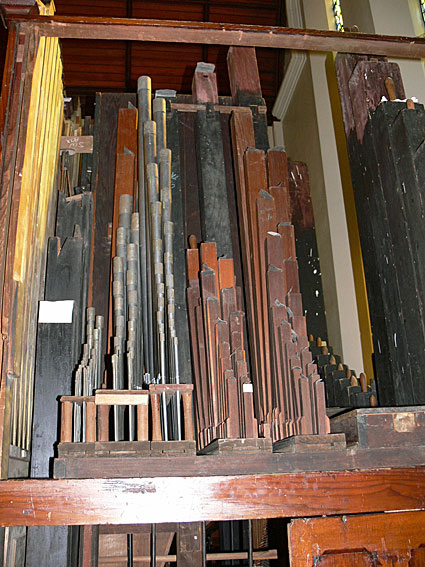 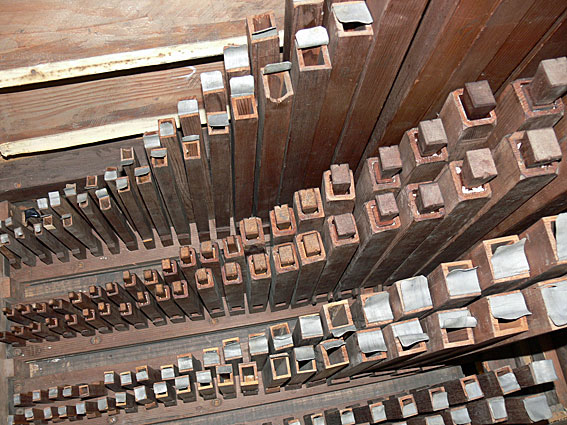 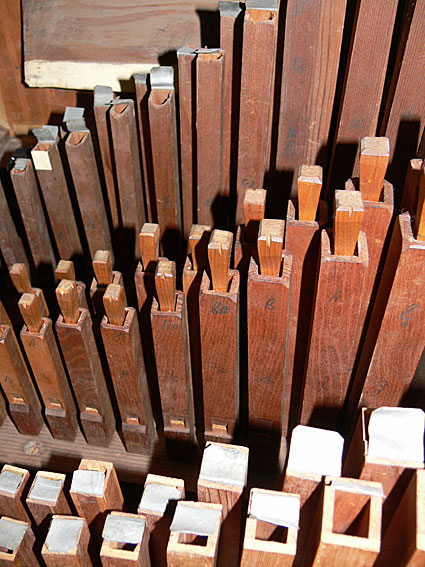 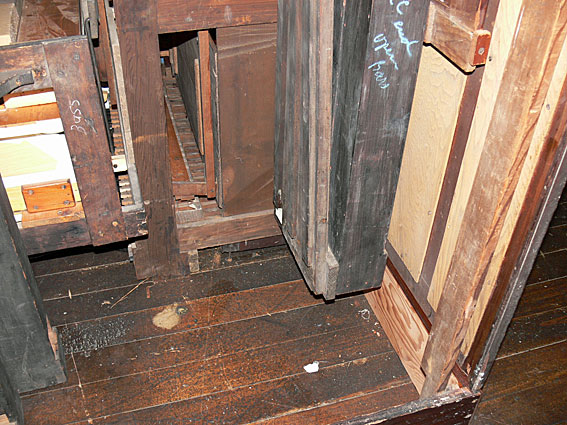 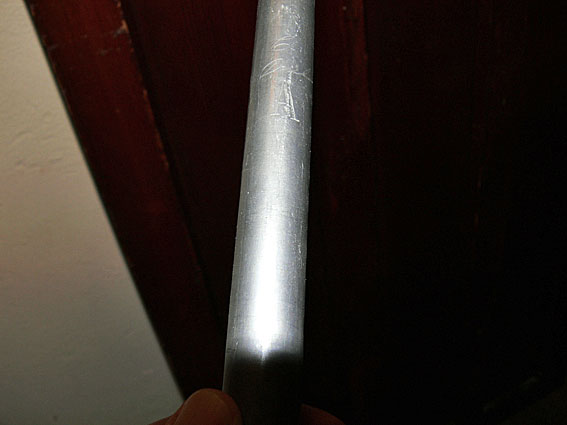 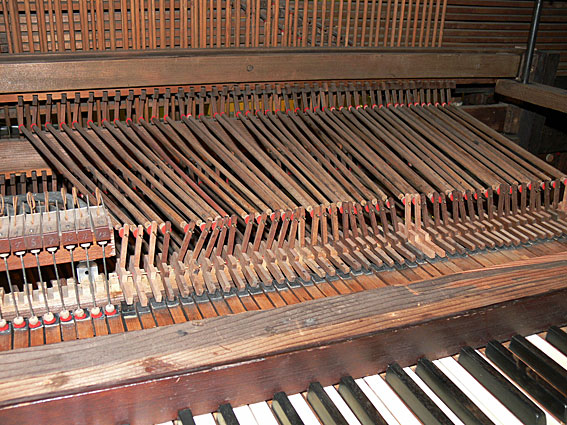 Photos above by John Maidment (February 2011)