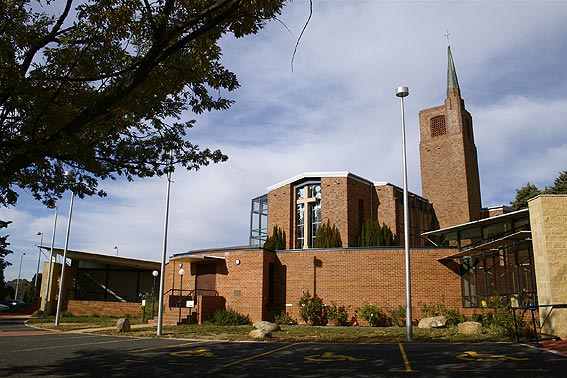 The pipe organ in Wesley Uniting Church is the largest and most versatile liturgical and recital instrument of its type in the Australian Capital Territory. During the period 2000 to 2002 the organ was comprehensively rebuilt and revoiced by George Stephens of Adelaide. The aim was to make it a fully integrated instrument to match the enhanced acoustic of the church with appropriate voicing and the best available electrical and mechanical systems. It is now an outstanding George Stephens rebuild which faithfully restores more than 14 ranks or approximately 820 pipes, including major flue choruses, from the cherished 1893 Alfred Hunter organ in the former Methodist Church in Burwood, NSW. 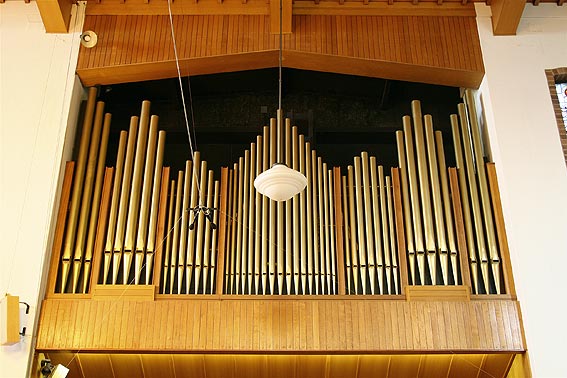 The new Church incorporated a pipe organ built by George Fincham and Sons of Melbourne. It was a small extension organ of two manuals and 9 ranks. It had direct electric action and some 30 stops were derived from 5 ranks on the Swell Organ and 4 ranks on the Great Organ. Both divisions were enclosed in separate expression boxes.

In the 1970s plans were developed for the enlargement of the organ as a comprehensive instrument for the performance of music from all the great periods of organ composition. The objective was a specification designed to achieve tonal balance and integration in accordance with sound principles of organ construction.

A leading member of the Church, John Bathgate, acquired pipes and soundboards from two main sources. He purchased pipes and soundboards that had been part of a fine Alfred Hunter 3 manual organ in Burwood Methodist Church, Sydney. This organ was built in 1891-93 by Alfred Hunter and Son of High Street, Clapham, near London. It had 33 ranks and was widely acclaimed. Because of damage caused when and after the organ was dismantled following sale of the Church, it was not possible to restore all the ranks. Howsever, 14 complete ranks, a total of around 820 pipes and two soundboards from Burwood, could be incorporated into an enlarged organ. Fortunately these represented significant, distinctive and recognisable elements of the Hunter organ, including major choruses from the Great and Swell. It is not surprising that the Fincham and Hunter pipes are a good match. George Fincham knew Alfred Hunter well and in fact visited his factory in London. He studied his organ building methods and was quick to consult Hunter on any new developments and techniques in the profession.


The Hunter Pipes
incorporated in the Wesley rebuild are:


John Bathgate also acquired 9 ranks and a soundboard for a third manual Positive Organ from Gustav Bier of Giengen, near Ulm, in Germany. This firm had been engaged in organ building since 1515 and had developed a reputation for fine restoration work on 18th century organs in Germany and Switzerland.

John arranged for the purchase of additional ranks from Gustav Bier, including the Pedal Fifteenth 4ft and Mixture III and the Great Blockflute 2ft, and a Great Quint 2-2/3ft from Australian Pipe Organs in Melbourne. In 1981 George Stephens of Adelaide was commissioned to refurbish the Hunter soundboards which have been left unchanged in the latest rebuild. Other work in putting together the pipework from different sources was undertaken by volunteers under the guidance of several organ builders. The enlarged organ was dedicated to the memory of John Bathgate on 29 May 1983, although much work remained to be done to complete the organ to the proposed specification.

From 1980 to 1998 Anthony Welby was involved in various improvements and maintenance. One major change during this period was the ability to play all the enclosed Great ranks (the Fincham Great and the Hunter Clarinet) on the Positive manual. He installed the Pedal Open Diapason (to George Stephens specification) and the Pedal Fifteenth 4ft and Mixture III (from Gustav Bier). 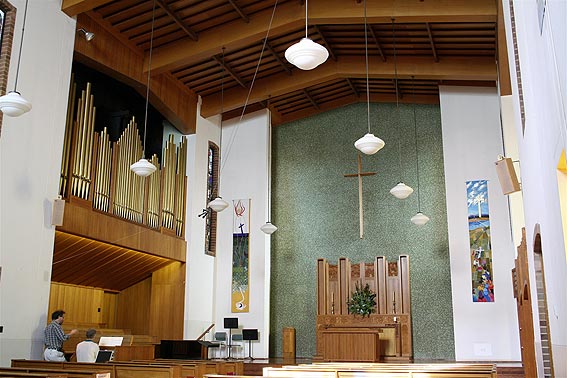 George Stephens developed an international reputation for the quality of his pipe organ voicing. He gained his experience in working for the organ building firms of Rushworth and Dreaper in the UK and Hill, Norman and Beard and Steve Laurie in Melbourne. He commenced his own business with brother John in Melbourne in 1975 and then moved to Adelaide in 1979 taking over Gunstar Organ Works.

From 1999 George Stephens took charge of planning a comprehensive rebuild of the Wesley organ. The objective was to bring about effective tonal integration in the enhanced acoustic environment of the church and bring the total instrument up to the highest international standards for liturgical and recital purposes.

Over the years from 1983 to 1998 significant changes were made to improve the church acoustics. These were undertaken in six stages involving replacement of acoustic tiles on the ceiling and on cladding across main ceiling beams and the placement of diffusing panels on walls in the chapel and at the rear of the church. The result was dramatically improved reverberation times and acoustic quality and balance.

Major work on restoration, revoicing and electrical and mechanical systems was undertaken in 2001. The final stage was completed in August 2002. Key features of the rebuild were:

• A reduction in the pitch of the organ to standard concert pitch.
• A complete revoicing of Great and Swell ranks in the Adelaide factory.
• The revoicing of some Positive pipes on site.
• A decrease in the wind pressures in Great and Swell manual ranks from 107 mm to 95 mm.
• An increase in the wind pressures of several Pedal ranks (including the Flute 4ft, the lower octaves of the Mixture III and the bottom octaves of the Trombone 16ft and the Pedal Diapason 16ft).
• Incorporation of computerised Peterson (USA) expression for the Swell and enclosed Great
• Replacement of all electrical wiring in the console and throughout the organ
• A new underaction for the Hunter Great soundboard.
• The discarding and replacement of the Swell Hunter Flute 4ft and replacement of a number of other pipes that had suffered damage or maltreatment over the years.
• New top octave pipes to increase the manual ranks on the Hunter Great and Swell soundboards from 56 to 61 pipes.
• A refurbishment of the console and pedalboard.
• A new 40 memory capture system with 8 generals.

The rebuilt organ was re-dedicated on 1 September, 2002

In 2006 Ian Brown and Associates took over from George Stephens in the regular maintenance of the organ. In August 2006 Ian and Jennifer Brown installed three additional pedal stops (stops 1, 2 and 3 in the specification) to complete the tonal balance. This was desirable because of the placement of the Open Diapason 16ft which could not be heard evenly and loud enough throughout the nave of the Church due to standing waves. The successful solution was the use of high quality Peterson electronic low notes with four speakers high in the Swell box. The additional sounds have transformed the f and ff dynamics for church services and concert performances. The Contra Violone is a very useful soft stop. 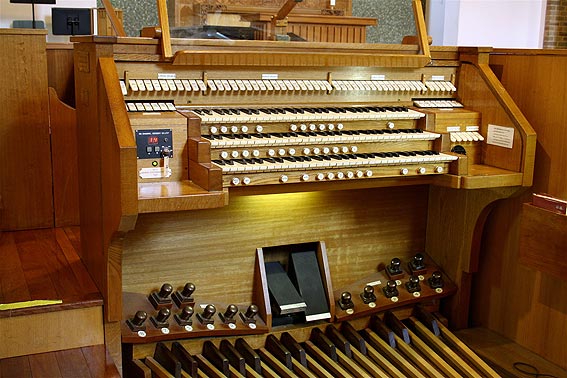 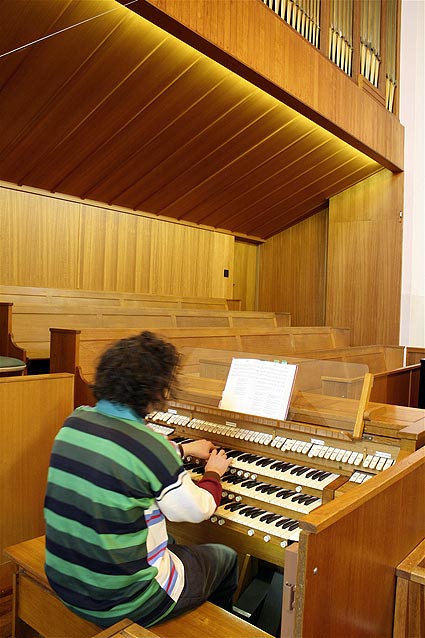