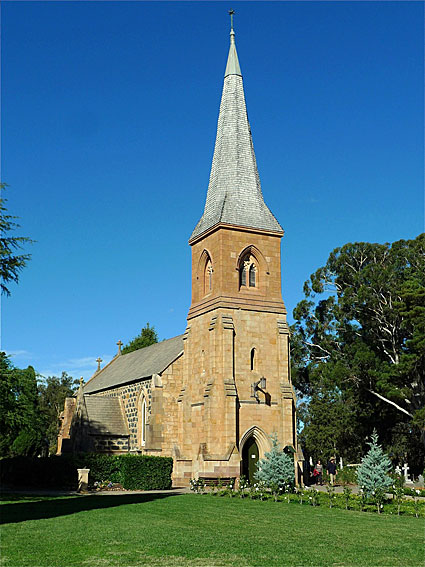 The Anglican Church of St John the Baptist is the oldest church in Canberra and was built long before the district was chosen as the site for the national capital. It is a small building constructed from local stone and is situated on land donated by a local pioneer, Robert Campbell. The foundation stone was laid on May 11, 1841.

The first organ, a single manual tracker instrument of English origin was installed c. 1862 and is now located at St Luke's Anglican Church, Deakin, several kilometres away. A second instrument, built in 1933 by Hill, Norman & Beard had 5 extended ranks with electro-pneumatic action. It was sold for private use in 1979.

The present instrument was delivered in 1981 by Ronald Sharp and is a 2-manual tracker action instrument located in the west gallery. 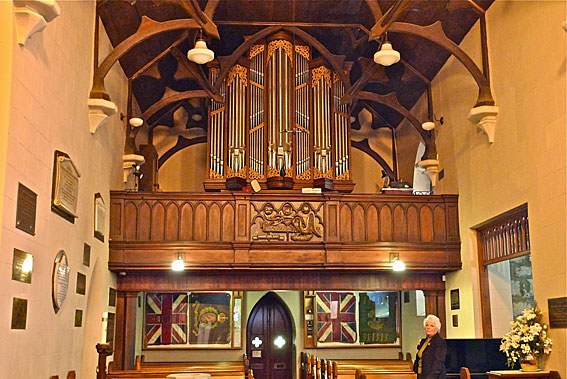 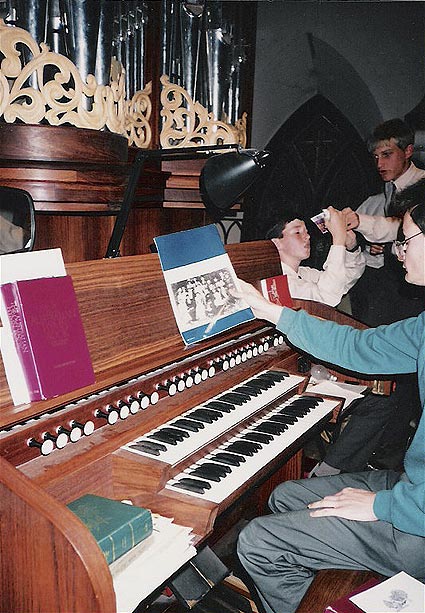 Ronald Sharp has built a magnificent instrument which is perfectly suited to the building and the liturgical requirements of the church, although to some its tonal and structural design (as appears on paper) may seem unorthodox. However, in every aspect the instrument is an outstanding success - the chief features of the instrument are outlined below.

The casework, which is a joy to behold, is constructed from Western Australian Jarrah, and the front burnished pipes are 75% tin.

The arrangement of three towers and ten flats with beautifully carved pipe shades was designed by Sharp using an early Dutch model. Below this, and closer to the gallery rail, is a detached console with a single row of drawknobs above the top manual.

Apart from the Prinzipal 8, and Offenflöte 4' (which are in the case), the whole organ is in a large room-like swell box with shutters on the front and sides towards the back. There are two swell pedals and in a small building like this one, the level of sound can be controlled to suit various liturgical needs - by no means is the sound of the organ muffled or restrained by this feature.

The tonal qualities of this instrument are indeed noteworthy, sharing a similar exquisitely beautiful, unforced quality with other Sharp organs. The choruses are well balanced, full and clear - the lack of Principal tone in the Positiv is not at all a deficiency given the fine voicing (in both the individual and ensemble sense) and the availability of a Hauptwerk to Positiv coupler. The full organ is quite powerful, its grand sound is capable of leading the largest congregation. Obviously, the scaling, voicing and pressure used contribute to the instrument's success in this regard. The flutes and mutations have a singing quality not unlike those at Ormond or Knox and the strings are a valuable asset in a liturgical setting. All the other stops are of distinction, particularly the fine Trompete whlch is very full bodied and blends well with the Hauptwerk chorus.

This interesting and exquisite looking instrument is Ronald Sharp's last major instrument, dating from 1980. In its cabinet-maker-made architect-designed jarrah case with tin façade pipes, it not only enhances the West end of Canberra's oldest church, but gives casual onlooker the impression that it has always been there. Tonally the organ's Germanic stoplist belies its appropriateness for the church's many liturgical and civic functions, thanks to the warmth of its voicing, the enclosure of most of its stops, and the comparatively generous wind pressure of 80mm throughout the organ. Recent work has included cleaning and overhaul, with meticulous attention being paid to preserving the instrument's tonal qualities. 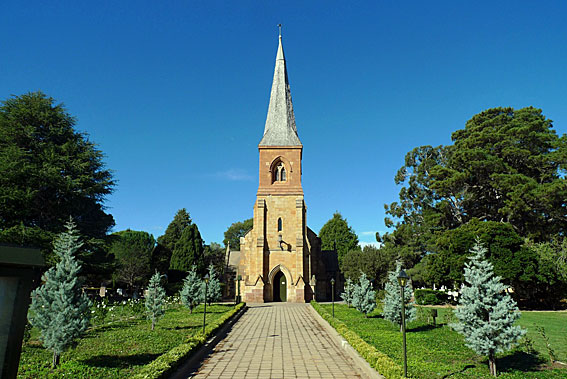 The following is a Canberra Times article written circa August 1979 by a well known local journalist, Ian Warden.

The organ which has been making a joyful noise at St. John's Church Reid since 1933 is to be sold and removed.  Last Wednesday was the closing  date for application by tender to buy it and a decision on the organ's fate and destination will probably be made at St John's church council next Tuesday.

The successful tenderer must dismantle the organ and lug it out of  St John's by mid- November.  It is hoped that the new organ, to be built in the gallery of the venerable church at a cost of thousands of shekels, will be ready to make its own joyful noise by the middle of 1980.

The rector of St John's, the Reverend Owen Dowling, said last week that the old organ probably would go to another church or to a museum.  He thought it most unlikely that it would be sold for scrap.

Mr Dowling, a musical man, is obviously licking his lips in anticipation of the new instrument. He has described the man who is to build it, Mr Ronald Sharp, as a "genius" and in conversation with me he described the present organ as "a very  ordinary, indifferent sort of object" and as "a hack, with no particular character".

The new organ will be a mechanical contraption with a far greater life-expectancy than the all-electric organ that it will replace.  Mr Dowling also seems to expect that it will make a more pleasing racket than the "hack".  At $70,000 it ought to sound like 70,000 gleeful larks.

The "hack", built by Hill, Norman and Beard in 1933, would have required drastic refurbishing and continuous maintenance whereas the new organ, even in the unlikely event of it sounding like 70,000 crows, should exhibit the trouble-free qualities of mechanical organs,  "There is nothing that can go wrong with them", Mr Dowling opined, prophetically.

Although a thousand ages in God's sight are said to be like an evening gone, Mr Hugh Bartholomews's 30 years as an organist at St. Johns still seems to be an impressive achievement.  The removal of the organ which he has played since September, 1949, coincides with his own retirement.

Mr Bartholomews came to Australia from Ceylon in March, 1949, having been organist at St Paul's in Colombo for 18 years.

"God willing I will be 70 this November", Mr Bartholomews told me at St John's last week.  He feels that having been an organist for 48 years, he should make way for a younger musician to tickle the consoles, although he will still play for the 8am service at St John's on Sundays.

As one might expect, Mr Bartholomews's acceptance of the economic logic of the decision to replace the ailing organ is mixed with some mild sadness.  " I love the old organ and I can play it with my eyes shut", he told me, and then he gave me a short enchanting recital, albeit with his eyes open.  At my request he played 'Rock of ages' (Petra) to me twice, with the organ making all the soft, plaintive moos and sighs appropriate to that moving ditty.  I became entirely maudlin.  Then Mr Bartholomews played 'Crimond' with the organ uttering several of the spine tingling snarls of joy and triumph that 'Crimond' requires.  I felt so elated that I wanted to go out and punch some atheists.

We both agreed, a mite carried away, that it seemed a shame to turf such a sweet-sounding contraption out, but then we reasoned that St John's short-term loss night be another Canberra church's gain. 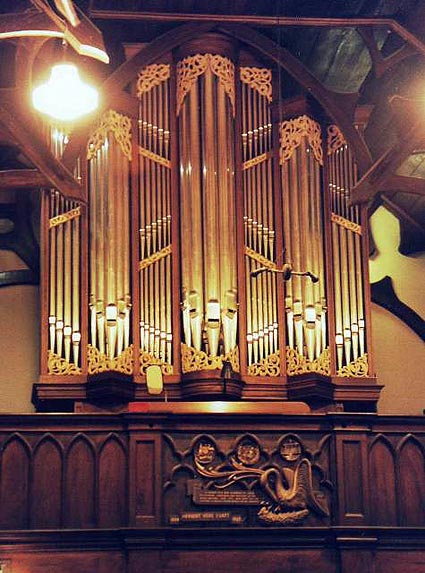 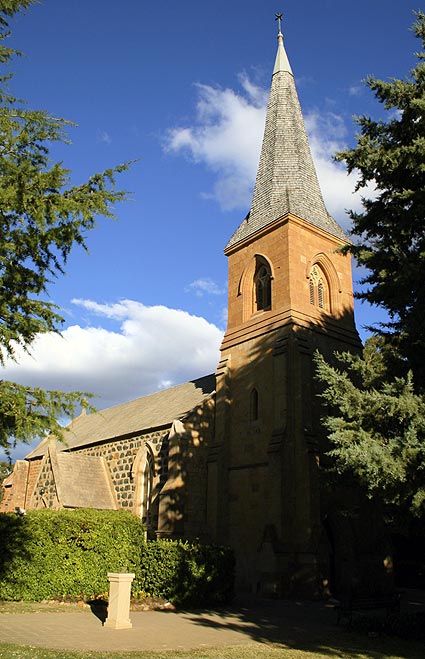 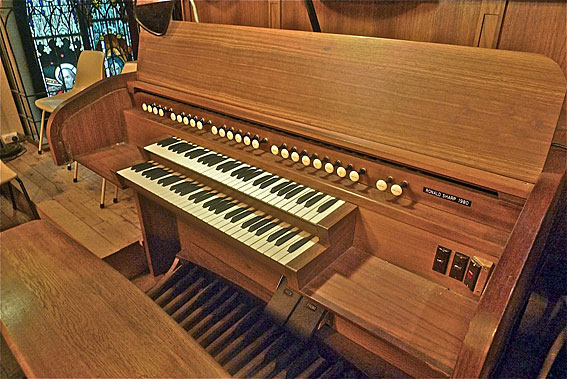