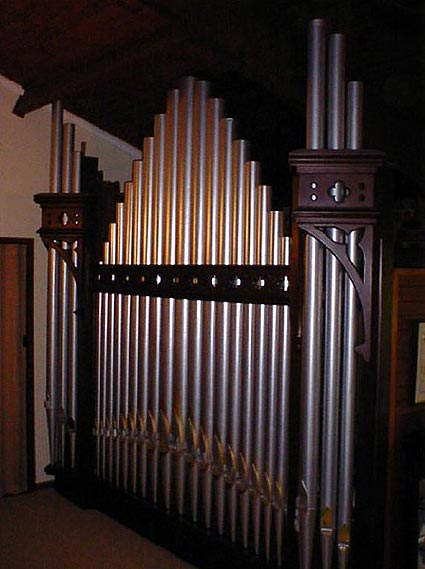 The pipe organ came originally from St George's Anglican Church, Gawler, and was built by Johann W.Wolff in 1877. The organ was enlarged and converted to electro-pneumatic action in the 1960's. By 1986 the organ was in a bad state of repair and was replaced by a much larger instrument from England.

I purchased the Wolff organ in 1986 and with the help of an Adelaide organ builder, Leith Jacobs, turned the instrument into a house organ of 8 ranks. It was modernised with a new direct action chest and solid state switching designed and built by Adelaide organ builder George Stevens. The original 1877 casework has been retained, and the organ still has six ranks of pipes from the original Wolff organ. The labial oboe and the larigot stops were built by Roger Jones of Nuriootpa in the Barossa Valley.

The original organ was voiced at 3 1/2 inches wind pressure, but was revoiced at 2 1/2 to suit its new role as a house organ. A new B.O.B. blower was imported from England to supply the wind, and a new regulator was built by Leith Jacobs. All the pipes are un-enclosed. The organ occupies a space 3.4m (l) x 1.8m (w) x 3.0m (h) 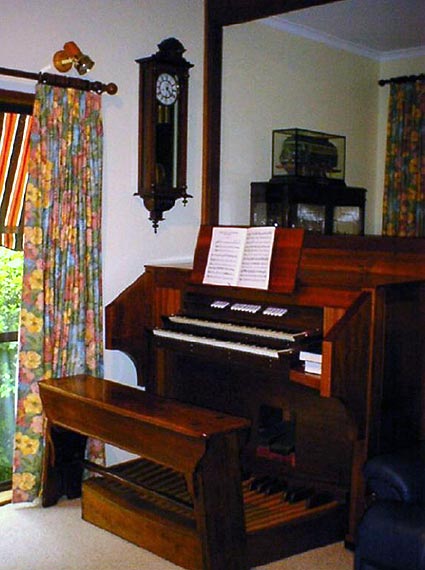 The present specification is: