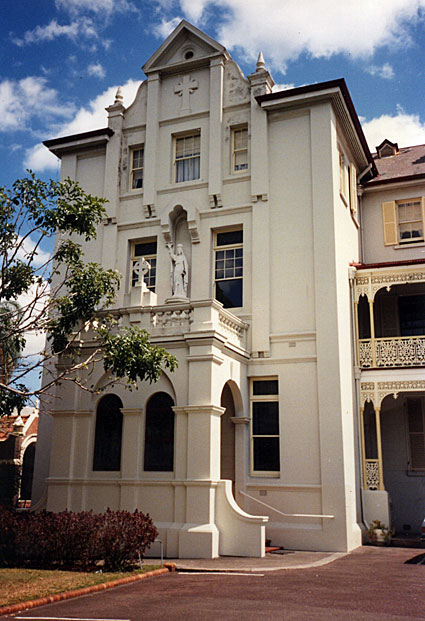 All Hallows' Convent and School was established in 1863 on the present site above Petrie Bite of the Brisbane River as the first permanent home of the Sisters of Mercy in Queensland. The convent building is based around 'Adderton', a house built in the late 1850s for Dr George Fullerton. Most of the present complex was added in 1891-92, to the design of local architects, Hunter and Corrie. The original chapel (situated in the south-western wing) was almost tripled in size in 1921 when the present nave and transept were added, using a classical design by local architects, Hall and Prentice. The chapel was refurbished in 1968 in line with changes associated with the Second Vatican Council.1 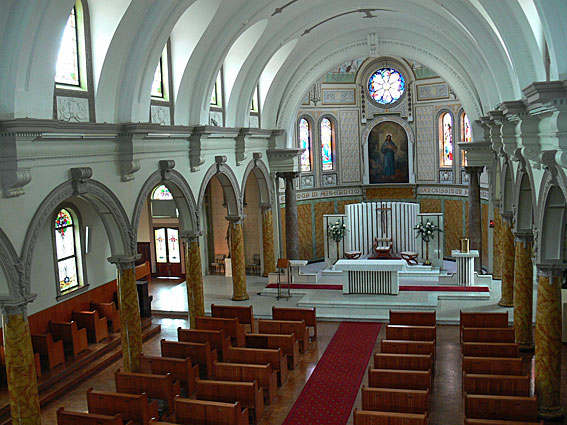 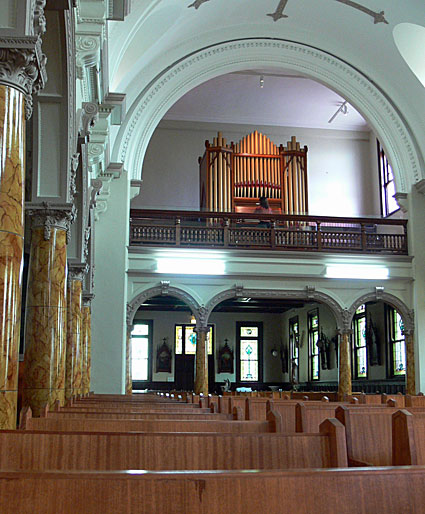 The organ is located in a gallery within the rear (earlier) section of the chapel, which opens onto the nave extension through a large archway. It appears to have been installed here around the time the chapel was enlarged in 1921,2 having been built originally by B.B. Whitehouse & Co. for Holy Trinity Anglican Church, Mackay, North Queensland,3 where is was opened on 8 October 1911:

A new pipe organ, costing £435, has been installed in Holy Trinity Church, Mackay, by Messrs. Whitehouse and Co. The instrument was opened free of debt. Mr. L. Weston, organist of the Townsville Cathedral, played the opening services on October 8, and gave an organ recital on the following evening. The choir of 35 adult and 12 boys' voices rendered the sacred cantata "Esther" on the following Wednesday in an almost faultless manner, the organ accompaniment being played by Mr. Weston. The offerings for the week were over £40. During the three and a half years that the Rev. Francis de M. Tubman, M.A., B.Sc., has been rector of the church, about £1100 has been raised by free giving for special purposes, besides fully maintaining the upkeep of the parish church.4

The organ was dedicated at Mackay in memory of Mr Charles Webster, 'for 25 years a Parish Councillor and Church Warden.' The church was the second on the site, a wooden building in Gothic style built in 1879 to the design of the colonial architect, F.D.G. Stanley. Unfortunately the building was destroyed in the disastrous Mackay cyclone of January 1918.5 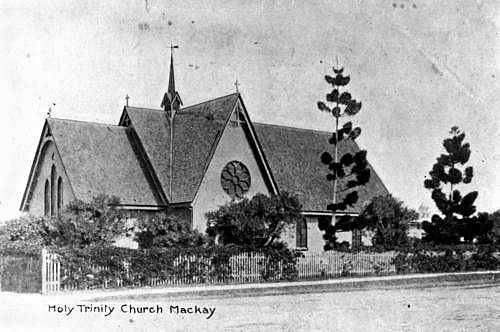 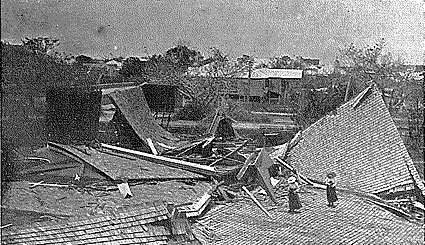 Having suffered very considerable damage, the organ was removed from Mackay to the premises of the original makers, B.B. Whitehouse & Co., George Street, Brisbane. Following restoration, it was installed in the present location with the addition of the Vox Humana 8ft stop.6 It appears that the Pedal Bass Flute 8ft stop and Swell Octave coupler were also added at this time, as these three stop knobs are lettered and shaped slightly differently from the others.7 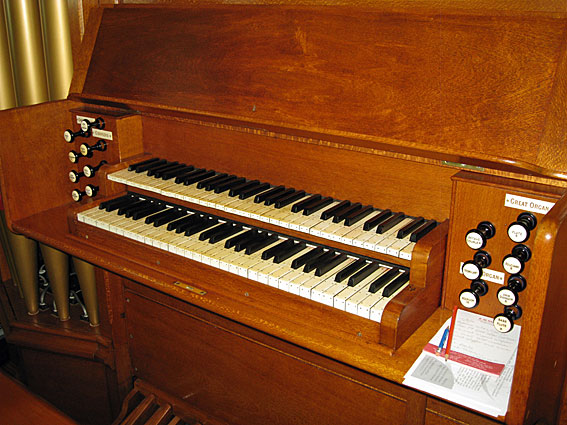 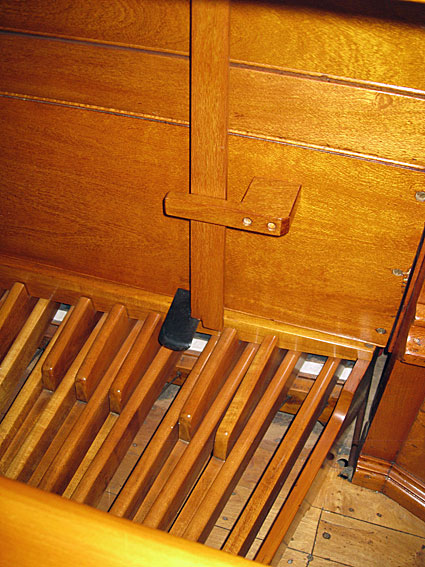 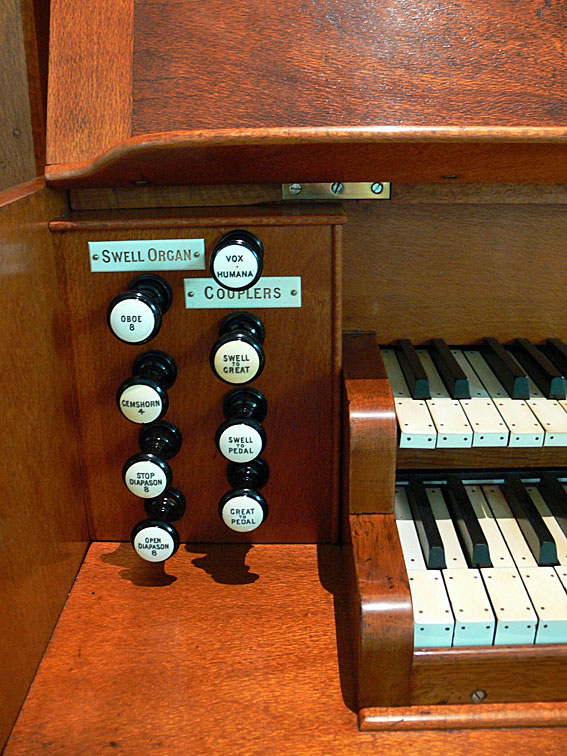 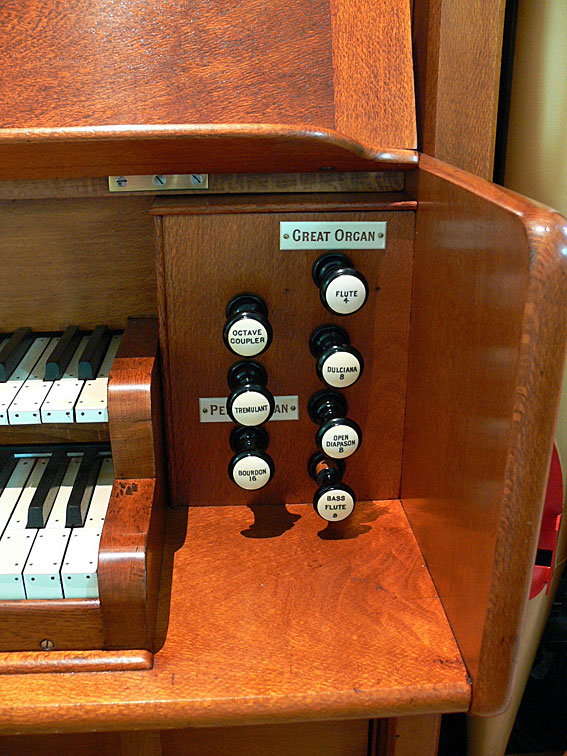 The façade pipes comprise one very simple flat and two towers with angled braces. This organ appears to have been one of three two-manual instruments of similar appearance and size built by the firm around the same time.8 The other two, at the South Brisbane Congregational Church (1910) and at Holy Trinity Anglican Church, Woolloongabba (1912), have been destroyed by fire. This instrument (and probably also the other two) shares with the firm's considerably earlier organ for Wesley Uniting (formerly Methodist) Church, Kangaroo Point (1903), the characteristic of a common soundboard for the Great and Swell. 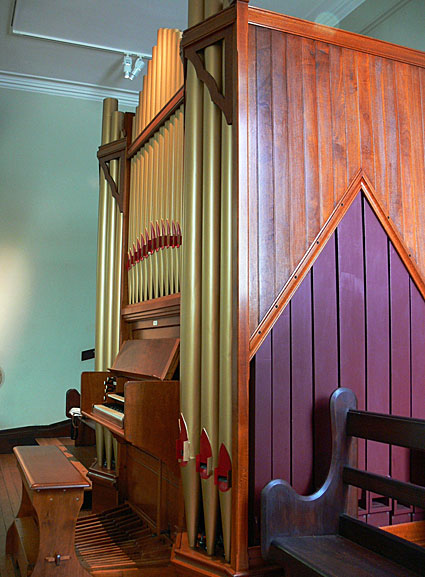 The organ case,
showing Pedal Bourdon 16ft pipes at the side
[Photograph by John Maidment (March 2011)]

The soundboard, action, console and casework were made in Queensland, while the console fittings were imported from Thomas Harrison of London, and the pipework from A. Palmer & Son of London. The ivories on the keys are tropic-pinned to guard against the ravages of the climate - a feature that may be observed also on the B.B. Whitehouse & Co. organ at St Mary's Catholic Church, Maryborough (1912).

The organ was comprehensively restored in 2011 by W.J. Simon Pierce of Brisbane.9 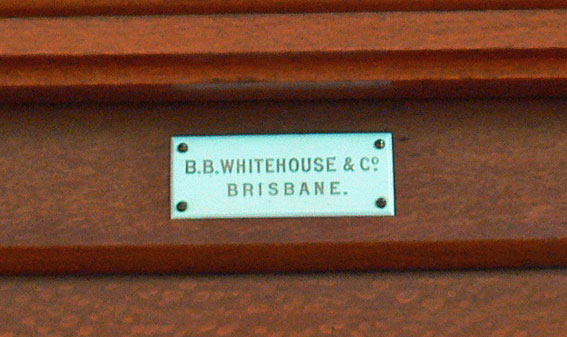 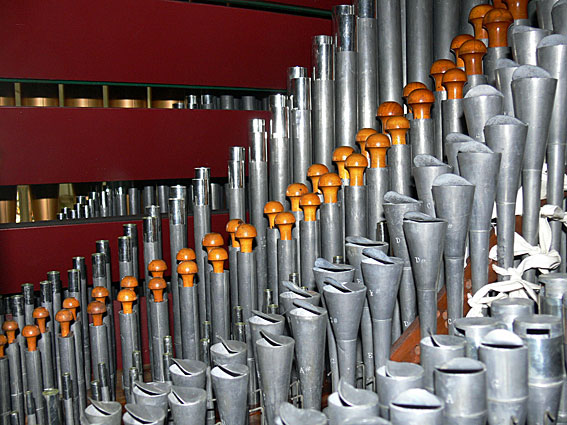 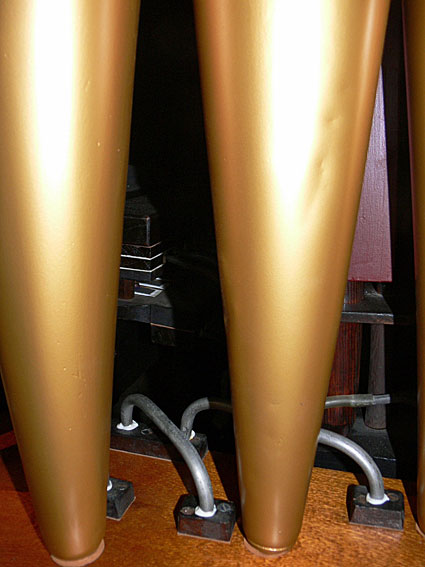 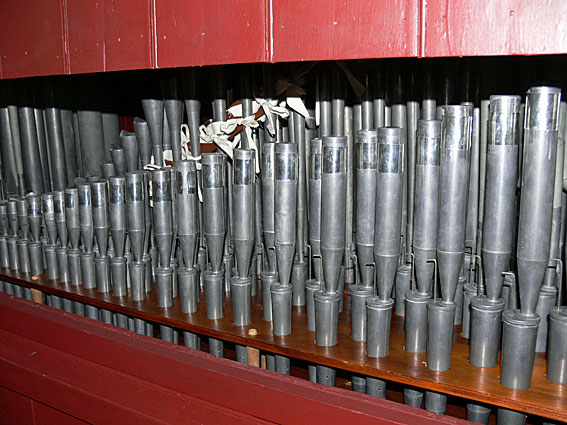 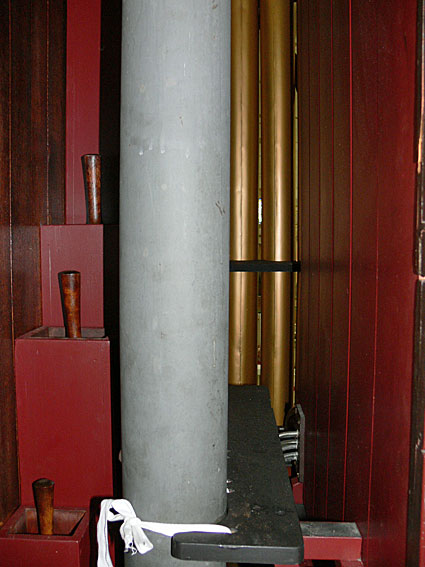 Pedal Bourdon 16ft
and Bass of the Swell Open Diapason 8ft, outside the swell box
[Photograph by John Maidment (March 2011)]

2 Sr. M. Celine, in a personal communication to G. Cox (1974) suggested that the organ was installed around 1919. The date when the chapel was enlarged, 1921, appears most likely.

7 These additions have been confirmed by inspection of the action by Simon Pierce.