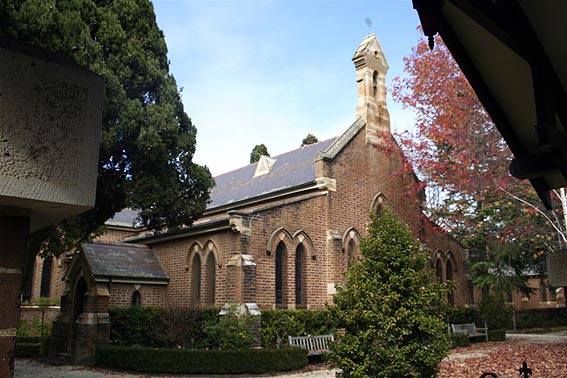 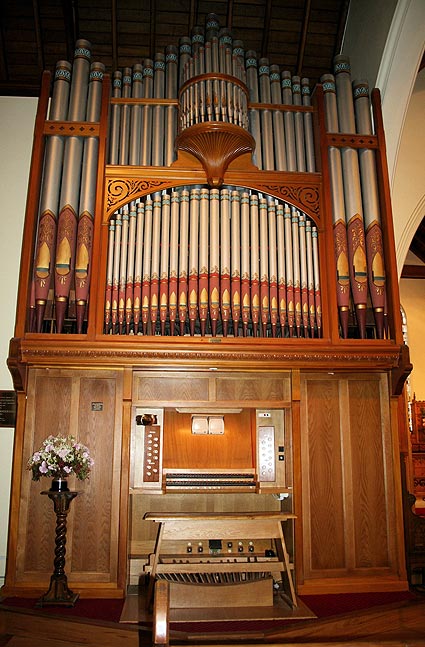 Early history:     In November, 1898, the Sydney organ specialist Charles Richardson conferred, in Bowral, with the Rector and churchwardens, advised a pipe organ costing £350 as most suitable for the church's requirements and offered to build a section for £250, and finish the work when the other £100 was forthcoming.

Mrs. H. M. (Emily) Oxley was able to guarantee that the £250 would be in hand by the following Easter, and, after discussion of technical details, Richardson was asked to submit plans and specifications for a £250 organ, which, with the consent of the parishioners, could be proceeded with without delay.

A meeting in February, 1899, authorised the Rector and wardens to obtain the instrument from Richardson, nearly £300 then being in hand, and a motion was carried acclaiming Mrs. Emily Oxley for initiating collection of funds, the service of ladies and friends who had assisted, and the generosity of a Mrs. Gadsden for her contributions.

Arthur Massey, organist at St Barnabas', Sydney, authorised progress payments, and the work, under the contract, was to be finished by the following December, although, in fact, delays occurred, and the organ did not arrive in Bowral until February 5, 1900 - whereupon Richardson and two assistants set about its installation.

Dedication:     The Archbishop of Sydney, assisted by the Rector, Reverend E. S. Wilkinson, dedicated the instrument on Sunday, March 11, 1900, there being 340 in the morning service congregation, the same number at the afternoon confirmation service, and 288 in the evening. Text of the Archbishop's Sermon was from Psalm 17: "Sing praises to God . . ."

The collections totalled £33 - sufficient to pay off the remaining debt on the organ, total cost of which was some £380.

The same month, Ben Osborne gave £20 for a new 2ft. stop (the piccolo harmonic), and, by the end of March, installation work had been finished.

The First Recital:     Was given by Arthur Massey, assisted by his wife as soloist, and also by Cecil Compton (who had been appointed organist and choir- master in October, 1899, from many applicants, after eight years in a similar capacity at Moss Vale Church of England), and the choir.

Later history:     Other important steps were, the installation of a gas engine to power the blower in 1901 (apparently nine pennyworth of gas then gave 10 hours' service); and some years later the organist, G. E. Vincent, advised doing away with the gas engine and substituting some better method of supplying air to the organ, as the engine and bellows were noisy. Finally, electricity was used for the first time in the church, both for lighting and to power an electric motor, replacing the gas engine, on December 21, 1924.

So far as is known, the organ is the largest church instrument of its kind between Sydney and Goulburn, and is certainly the largest in the Berrima District.   It has Great, Swell and Pedal organ components, and 16 stops as well as couplers, including the Clarabella and Principal stops added in 1935 in memory of the late G. E. Vincent, organist and choirmaster at St Jude's from 1908 until his death on March 6, 1932.

Despite Richardson's skill, the organ chamber proved too small, and it was found that, although the walls had been covered with a solution reputedly impervious to damp, the organ was being affected by damp air, and steps were taken to enlarge the chamber at a cost of £40, a contractor named Potter doing the work.   The chamber was thus doubled in size and permitted the pipes to be set parallel to a new wall.

During the history of the organ, numbers of repairs have, of course, been necessary.   The major undertaking having been the expenditure of some £365 in 1955 restoring the instrument to its original quality.

The specification of the Richardson organ at this time was:

The Richardson Organ was originally built in the English Romantic tradition, but in 1981 it was completely rebuilt and extensively modified by the Melbourne firm of Finchams. This rebuild converted the Organ into the neo-classical style in vogue at the time and changed radically its tonal qualities and its action.

In the late 1990s it was decided that the Organ was again in need of a major overhaul and Peter D G Jewkes Organ Builders was employed to restore the Organ's action and make some tonal modifications to make the instrument more eclectic. The first stage of this work was completed in 2003 when much of the Organ's action and wind system was replaced and a stop combination piston system was installed. The second stage was completed in 2005 when a Trumpet Stop was added and further work was done on the action. As the first two stages have significantly improved the instrument and made some proposed work unnecessary, before further work is done, a review of the Organ's needs will be undertaken.

To finance this work, members of the Church and local community have been invited to sponsor pipes. To date 340 pipes (out of a total of 1032) have been sponsored by 171 individuals, four families and ten organizations.

Stage Three Developement [from the back page of the organ recital program for Paul Jacobs' recital, 9th June 2007]

"Stage Three of the current restoration and upgrade program involves improvements to the Swell Organ by the addition of a Violin Diapason and the replacement of the Gemshorn with a Principal. At the same time as this work is done, the Oboe will be sent to Melbourne to be restored and a bottom octave made so that this stop can be used at both 8' and 16' pitch.

Looking to the future, provision will also be made in the Swell Box for the addition of a chorus reed in the next stage of the organ's development. To cope with the additional ranks and improve the organ's overall performance, a new blower will be installed. It is hoped that this work can commence in late 2007".

The St Jude's Organ is significant to the Southern Highlands in that it is the largest and most complete instrument of its kind in the area capable of handling most of the standard organ repertoire. It is used regularly for services as well as for recitals at the Mid-week Lunchtime Series, Music in Autumn, Music in Spring, an annual Sponsors' Recital and in other Community Concerts in the Church.

Few country parishes (or indeed city ones) could boast the number of enthusiastic and talented organists to be found at Bowral, presided over by the Parish Administrator and Organist Dr Allan Beavis. Work is now nearing completion on the next stage of work in a long-term plan for the tonal and mechanical improvement of this Richardson/Fincham instrument with its ornate Edwardian façade. The current work includes replacement of the dull-toned Swell Gemshorn 4’ with a Geigen Principal of the same pitch, to provide improved cohesion for the chorus and a better tuning reference. A Violin Diapason 8’ is also being added, to enhance the organ’s somewhat under-nourished 8’ line. Both stops are using pipework by Palmer of London, originally from St Clement’s Mosman, ideal in scale, voicing and vintage for the existing Richardson material at Bowral.

The Swell Oboe was converted to Continental design during the organ’s 1981 rebuild, with “plug in” wooden sockets, and straight tuning springs. These changes have now been reversed, with traditional metal boots manufactured by Australian Pipe Organs. A new bottom octave has also been provided to enable this rank to speak at 16’ pitch, with all 68 notes located on a new electro-pneumatic windchest at the rear of the enlarged Swell box. A new Cornopean 8’ will take the place of the Oboe on the front slide of the main Swell soundboard.


The lovely Richardson nameplate was found a couple of years ago by Robert Heatley languishing in a junk box at Finchams.  He gave it to us and we had it restored by Saunders (the ecclesiastical brassware specialists) and donated it to the church.


The current specification is:

Further programmed improvement work has recently been undertaken on this Richardson/Fincham organ, which leads an extremely busy life for a parish instrument in a rural setting. With at least 7 organists regularly performing on the organ, and a music programme which would shame many CBD churches, it was felt that additional General combination pistons and levels of memory should be provided, and that the opportunity should be taken to make the Swell 16' Oboe playable on the Pedal division as a contrast to the Fincham Fagott. With the church's winter music programme in full swing, special care had to be taken to ensure that the work (which necessitated dismantling of the console and mechanical action) was completed within a strict and limited time frame, which happily was achieved. 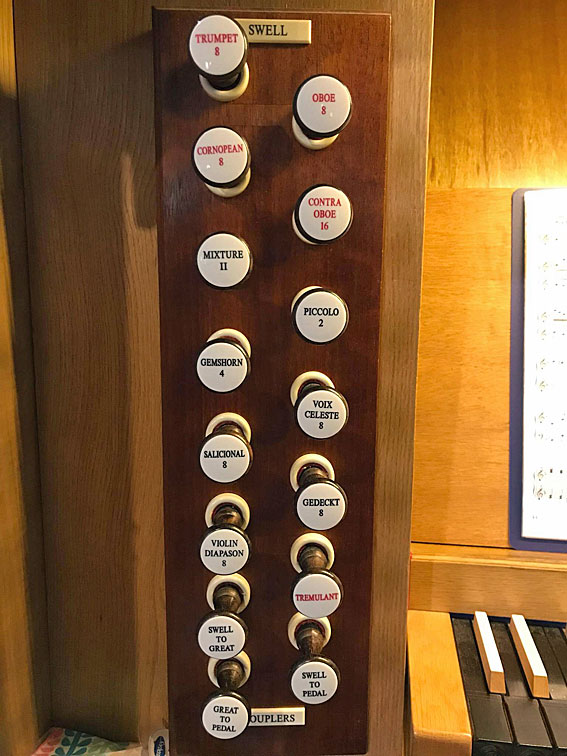 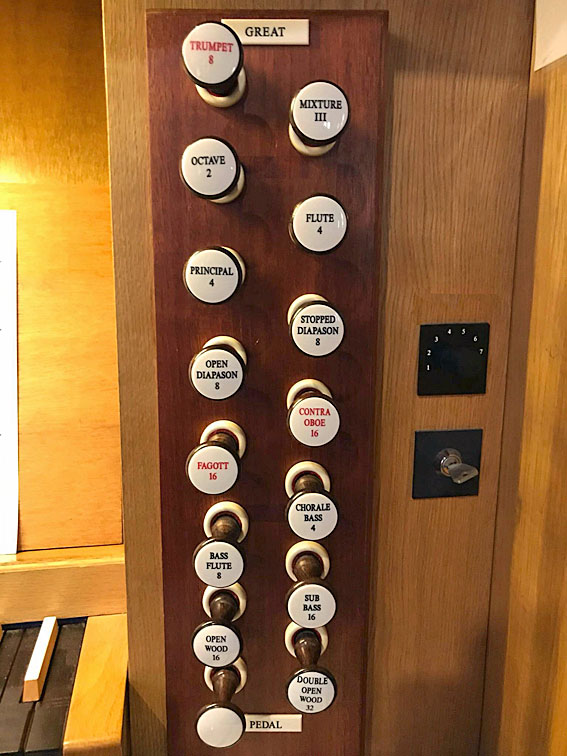 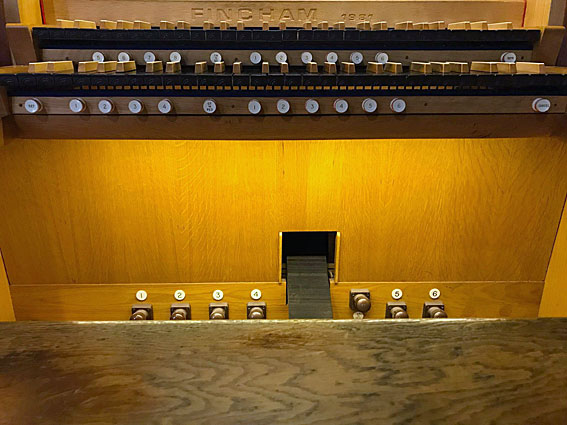 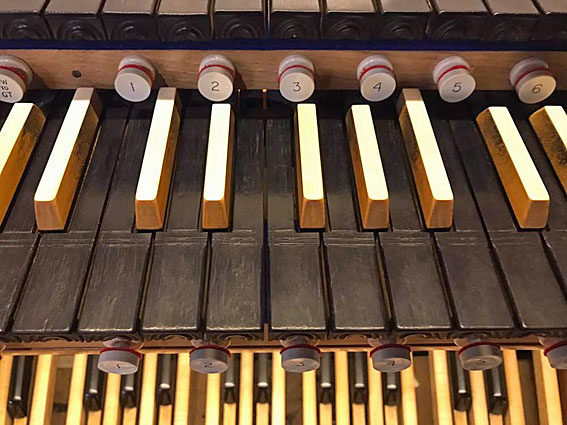 
Photos supplied by Trevor Bunning May 2006

Known as St Jude’s, this parish has for many years now had a busy music programme and active choir, under the direction and inspiration of Dr Allan Beavis, which would surely be the envy of many a busy CBD parish. The original organ at Bowral was built in 1900 by Charles Richardson, with sliderless windchests, tubular pneumatic action and one of Richardson’s most interesting and elaborate cases. The original console was located in the narrow chancel close to the sanctuary, with the manual divisions speaking into the North transept and partly into the nave, constrained somewhat by the organ chamber’s west-facing arch, a far from ideal situation for organists or choir. The action was partly rebuilt by S T Noad & Son on two separate occasions, whilst additional stops were added to try and increase tonal projection and versatility. In 1981 the organ was drastically rebuilt by George Fincham & Son of Melbourne, with only the case and pipework from the Richardson organ retained, the latter revoiced in the neo classical style, with additional new ranks. At that time the instrument was also redesigned for improved projection, with the case moved slightly Westward and the Great manual located forward of the old arch. The action was also converted to mechanical, with modern aluminium components. A new console was provided in the west-facing case, with reversed-colour short-length keys, a small-scale pedalboard, and mechanical stop action.

Since that time considerable tonal and mechanical work has been carried out by us, to improve the organ’s accompanimental function and mechanical reliability, also attempting to recapture some of the Richardson colours, consistent with its original tonal design, as well as its charming Victorian environment. A number of new stops have also been added to further this goal and add variety both for accompaniment and as a solo instrument, necessitating partial electrification of the action.

The most recent project, currently in progress, will see rationalisation of the various previous improvements, electrification of the remaining tracker action, and provision of a new “user-friendly” three manual detached console, including a prepared-for Choir manual eventually to be located in the space vacated by the 1981 console. The key and combination actions will finally be controlled by a new English solid state system. 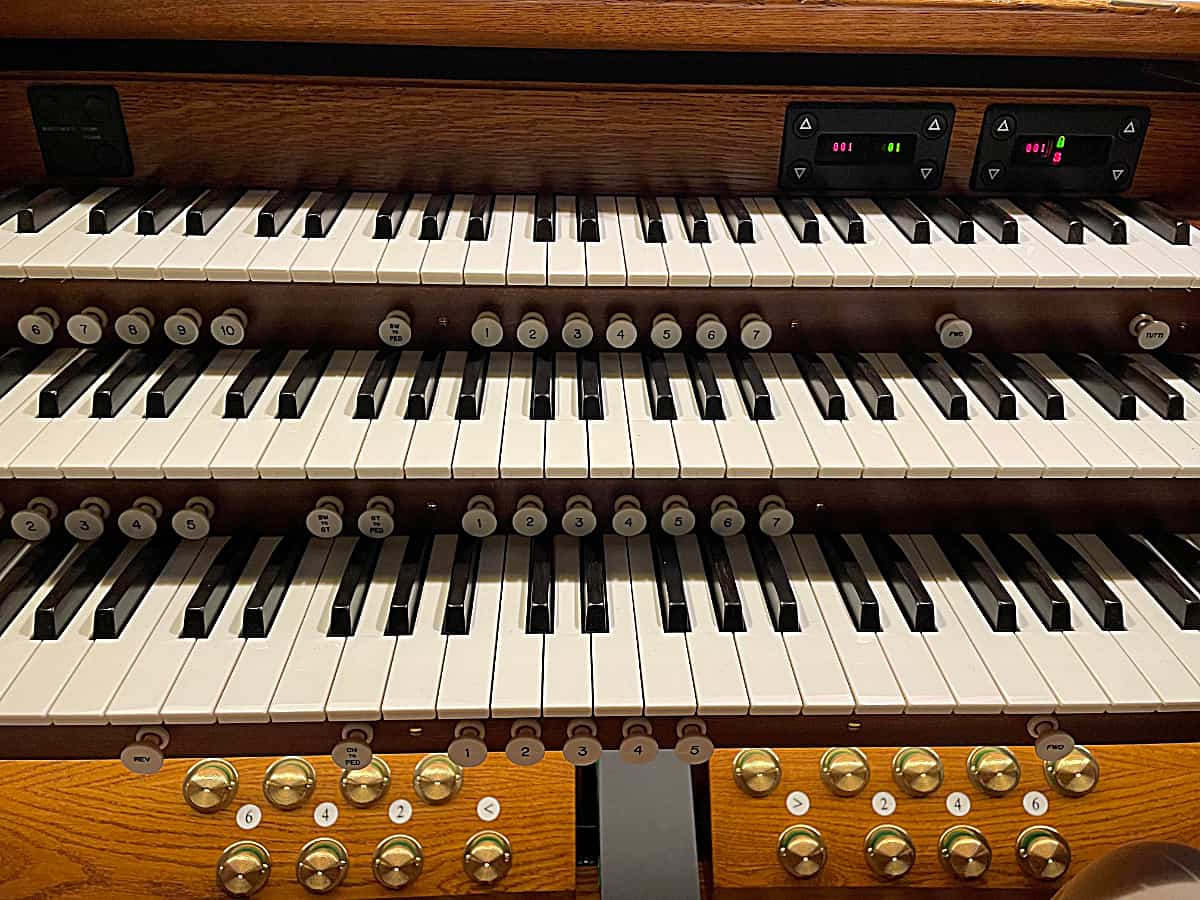 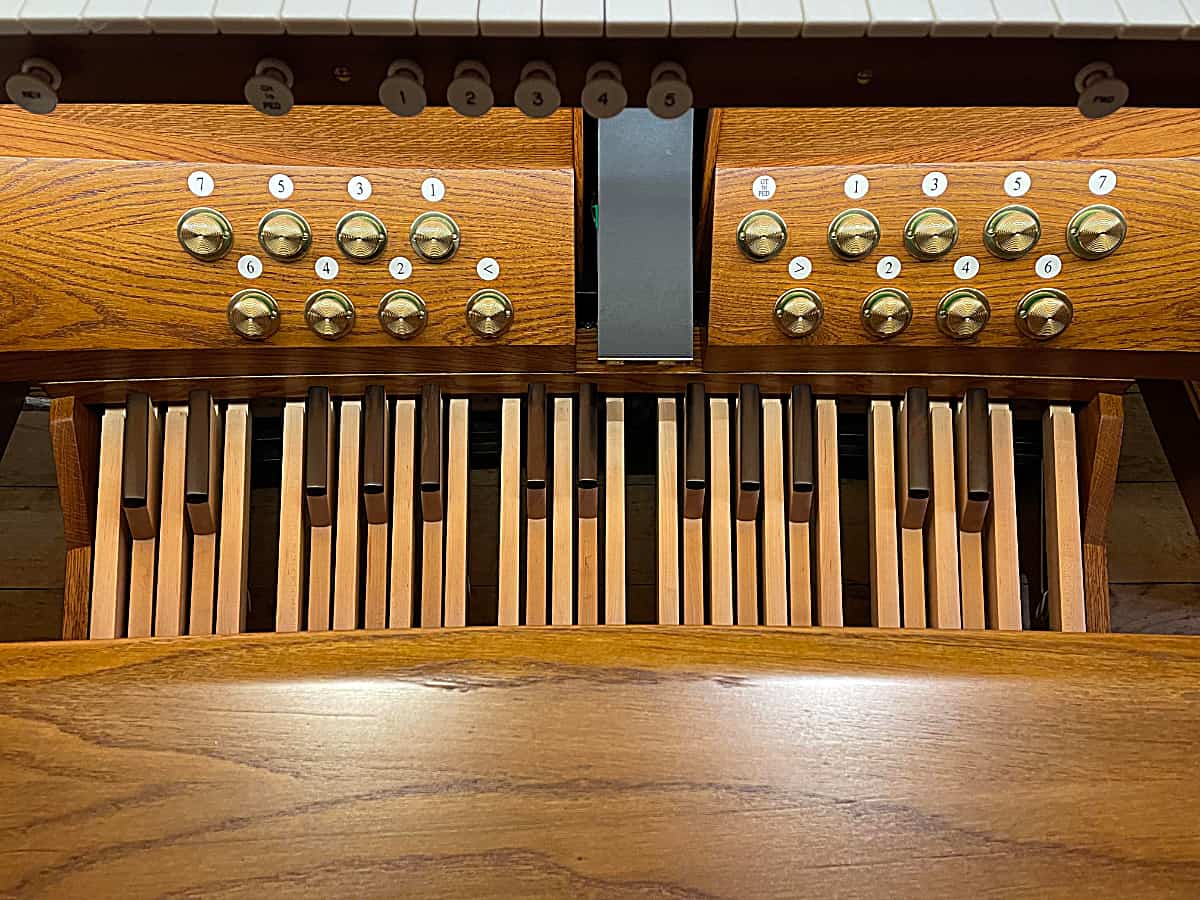 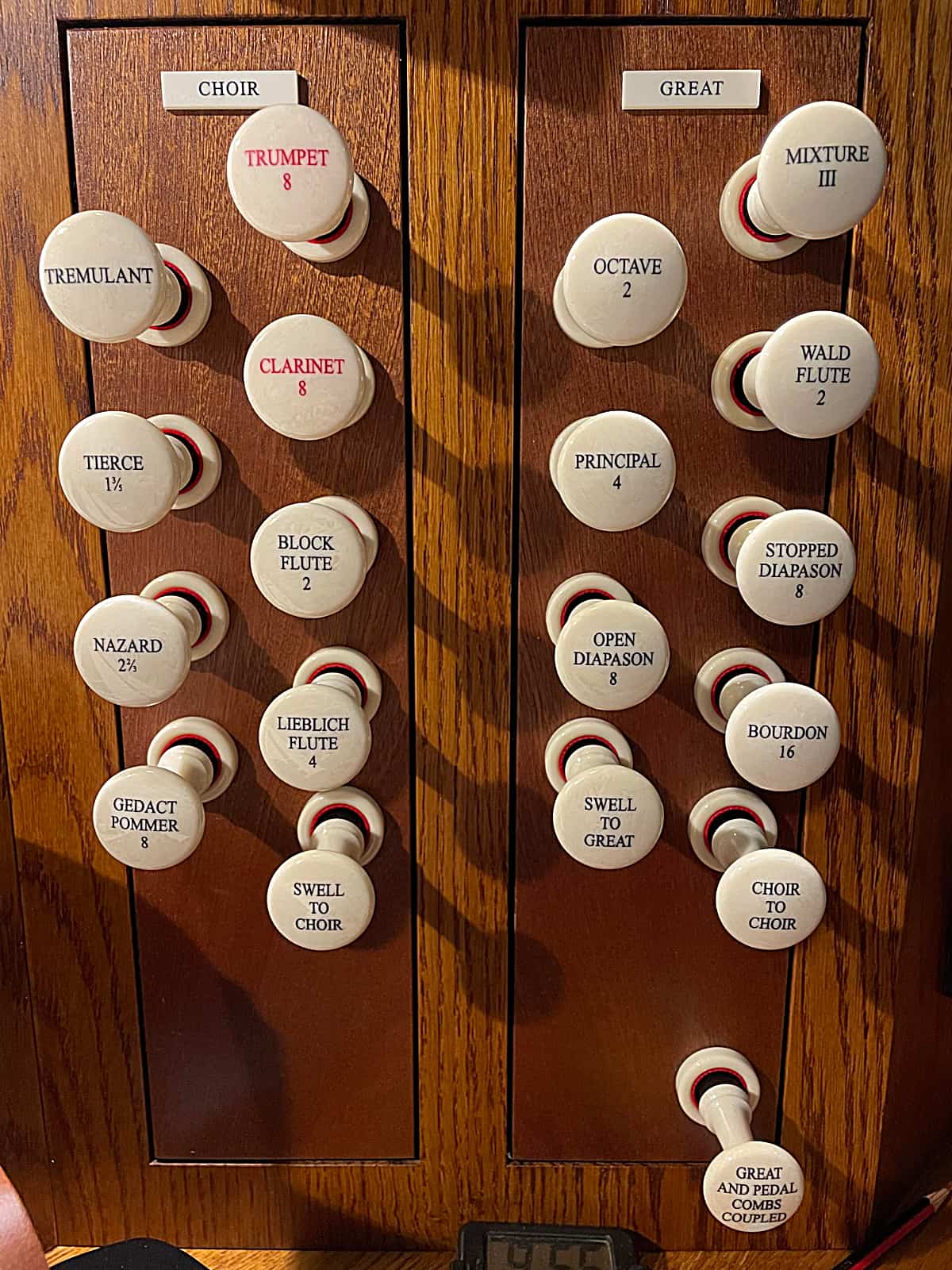 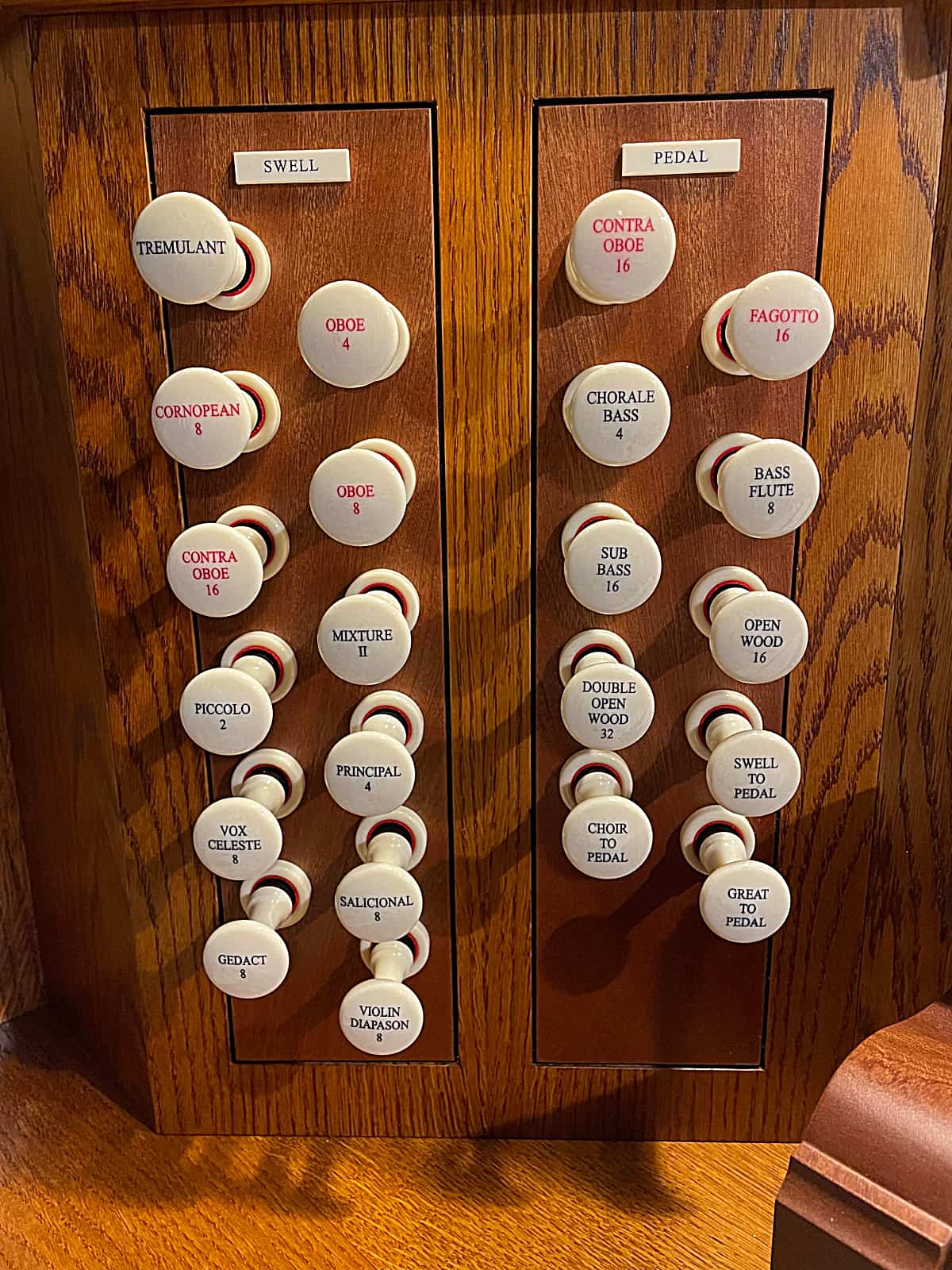 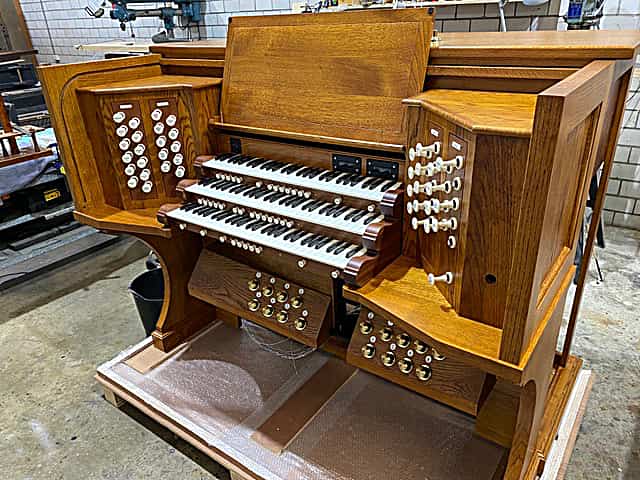 New console when in the Peter Jewkes' factory