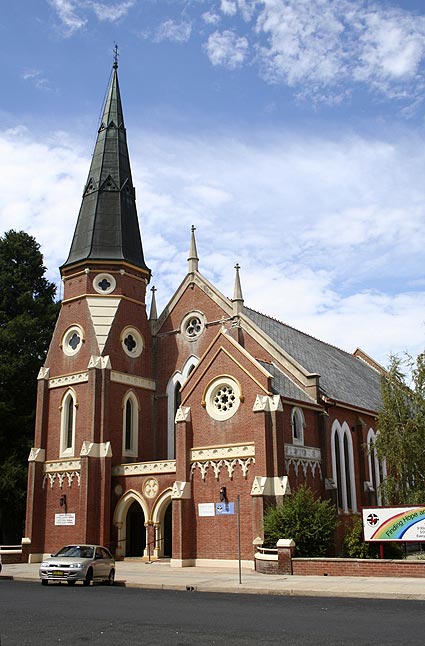 The notes below were written in 1990 by Kelvin Hastie for the Organ Historical Trust of Australia and have been revised (May 2007).


In the nineteenth century the Wesleyan Methodists of New South Wales established their most successful rural causes in Goulburn, Maitland and Bathurst. A small chapel was built at Bathurst in 1837 and still stands adjacent to the main building. The present building was built on the "Methodist Model Plan" and opened in 1860. The galleries, external tower and organ with its lower vestries, were all later additions. The building is one of the few galleried churches in this style to survive in Australia.

For many years the origin of the magnificent organ in the church remained a mystery. In 1978 a thorough search of old Methodist newspapers (The Christian Advocate and Wesleyan Record and The Weekly Advocate) revealed the identity of the organ. 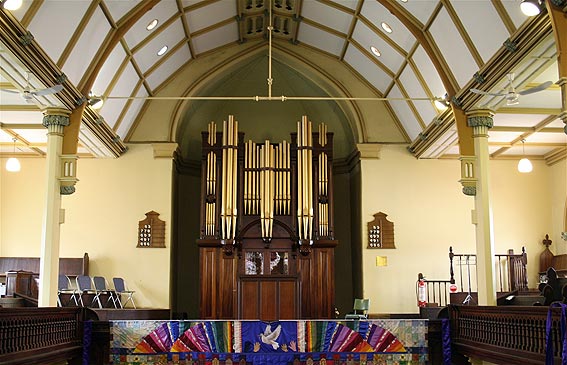 The following account described the organ as built by William Davidson and opened on 13-15 March, 1874:

"The new organ, built by Mr Davidson of Pyrmont, on the model of Bourke Street organ was on the days named brought into use for the worship of God and the assistance of his people in divine service. The Organ is finished in the most workmanlike manner, and certified by judges of such things to be a great credit to the builder, and the colony. It has been placed on a platform built for it at the south end of the church, so that it is in full view of the congregation. For the opening services the committee fortunately secured the help of Mr. F. Morley, of Bourke Street. This gentleman has taken great interest in the organ during the time of its being built at Pyrmont, and kindly gave his services to introduce the organ to the church in Bathurst. These services were performed in Mr. Morley's best style, and to the unbounded delight of all concerned...

The musical service was opened with a voluntary which drew at once rapt attention. The President then took the chair and first called upon Rev. F. W. Ward to read a Psalm, and the Rev. G. Woolnough to offer a prayer. Mr Morley then played a beautiful solo, which brought out the sweetness and power of the organ. This was followed by "Denmark" given by the organ and large choir under the direction of Mr. G Smith... the entire cost of the organ and platform, together with various incidental expenses amounted to about £390." [1]

This instrument was one of the earliest pipe organs in a Methodist building in New South Wales - earlier examples were located at York Street, Bourke Street and Wesley Church, Chippendale. Some prejudice had to be overcome before such instruments were found acceptable in Methodist churches.

In 1887 Davidson enlarged the organ and installed a pneumatic pedal action. After the completion of the galleries in the church, the organ was moved into the present apse with its acoustic shell. This location, without doubt, does much to enhance the projection of tone from the organ. The reference to this change in the position of the organ reads as follows:

"Sermons were preached in the Wesleyan church, William Street, on Sunday, December 18th [1887], in connection with the anniversary... The congregations were large, a special feature of the services being the singing, the choir having been supplemented for the occasion by additions from the Presbyterian and Church of England choirs, the organ being used for the first time since its enlargement. A large recess has been built behind the spot previously occupied by the instrument, and the additions consist of a complete pedal organ, consisting of sound boards with tubular pneumatic action, carrying the following stops, one open diapason, 16 feet, 30 notes; two bourdon 16 feet tone, 30 notes. An open diapason, 8 feet, has also been added to the swell organ, the oboe revoiced, as also one of two of the other stops. The alterations have been effected in the best style by Mr Davidson, of Sydney, the original builder, and greatly increased the power has thus been secured. Several high-class anthems were sung during the services. Mr. F. Morley, of Sydney, and Mr. C. Toole alternately presided at the instrument." [2]

In 1919 it was reported in the The Methodist that the organ had been overhauled, this process having taken John B. Holroyd six months to complete. Holroyd dismantled the entire organ, rebuilt the pedal pneumatic action, fitted new stopknobs and made other minor changes. At some stage the unison rank of the Great Mixture II was removed and in the mid-1950s S.T. Noad & Son fitted a tremulant.

By 1982 it became obvious that the organ would require restoration as it was simply wearing out. An organ fund was established and numerous concerts were arranged by the organist, Mrs Judith Brooke. In 1988 the church was successful in securing a grant from the Heritage Council of NSW and further funding was forthcoming from the Bicentennial Council. Quotes were sought from two organbuilders and Roger H. Pogson was awarded the contract to restore the organ, with Kelvin Hastie acting as consultant.

A considerable amount of labour was involved in the restoration - the following list summarises the work undertaken by Pogson:

1. Repair of all pipework. The metal pipes, all made by Davidson in his Pyrmont factory, are of excellent quality and did not require substantial repairs.

2. Restoration of the manual windchests, replacing any worn parts and renewing springs, pulldown wires, etc. The soundboards were found to be of sound design and construction.

3. Repair of tracker action components. Much wear had taken place in the action, especially in the pedal coupler section. Some minor alterations were required to some of the coupler action.

4. Rebuild of pedal pneumatic action. This action had been modified by Holroyd and was inefficient. The pneumatics were redesigned in a sympathetic style using ribbed oblong motors to replace the circular purses which had been very poor in operation. The touchbox at the pedals was restored.

5. Recovering of the bellows, repair of the wind system and installation of a new blower.

6. Repair of the casework and console. Much of the case was badly out of alignment - a result of the organ being twice previously dismantled. Substantial rectification of this problem has been necessary. Alignment problems with the action components have also been amended. Much of the area around the console was heavily worn and substantial timber restoration and the replacement of damaged sections have been necessary. Some components such as the balanced swell pedal and the drawknob rods have had to be completely replaced due to excessive wear.

7. The work was under re-assembly at the time of writing.

At all times, respect for the historical authenticity of this organ has been a them at the centre of the work. Replacement has generally been in facsimile of the original and any alterations have been minor and executed in the style of the original. The instrument shows Davidson to have been a master of tonal design - the organ has always been well-known for its exceptional choruses and the beauty of its flutes. It is regrettable that Davidson's largest works (St James', King Street and St Thomas' , North Sydney) can no longer be recognised tonally as his work, although St Paul's, Burwood (1890) survives and is well-known for its fine choruses, reeds and flutes, in spite of speaking into a poor acoustic. This latter organ was preserved only after a long campaign on the part of OHTA and the Heritage Council and a successful restoration, completed in 2005, will ensure its continued use well into the future.

There can be no doubt that the Bathurst Davidson shows the builders' chorus work to best advantage and the fact that the pipework has survived, with cone tuning, is of great importance. The organ, with its pleasing case in the style of the 1871 Jones/1878 Davidson now at Wesley Church, Wollongong, is a heritage item of national significance.