This historic church, one of the most splendidly apportioned in rural New South Wales, is delightfully set atop a hill on the outskirts of the small town of Bodalla. Fine views of the coastal hinterland may be taken in from the tower. The church has a fascinating history, long in association with the Mort family. [1] The following extract from a small publication about the church and its history elaborates:

"In 1857, after a two year holiday in England Thomas Sutcliffe Mort found his tract of land (13,000 acres) at Bodalla still unsold, so he decided to take it up himself

The story of Mort is well-known and is told briefly on the memorial tablet in All Saints' Church:

TO THE GLORY OF GOD AND IN MEMORY OF THOMAS SUTCLIFFE MORT and his wife THERESA SHEPHEARD MORT this Church was erected in 1880.

'Born in England at Bolton, Lancs. in 1816, T.S. Mort came to this country in 1837, a pioneer of Australian dairying, through the creation of the Bodalla Estate, of engineering and shipbuilding at Balmain, and of the wool industry and other enterprises, he devoted the last fifteen years of his life to the invention of a process of freezing and exporting Austalian meat to supply the need of England. A colonist and a citizen of keen foresight and unselfish service, the soul of honour, a faithful and generous churchman, a neizhbour of unfailing kindness to rich and poor alike, his simplicity of nature and largeness of heart gained for him the friendship and love of men of all classes. He died on 9th May, 1878, of illness contracted in ministering to the needs of one of his workmen, and was laid to rest in the cemetery of the Bodalla Estate he so dearly loved.' 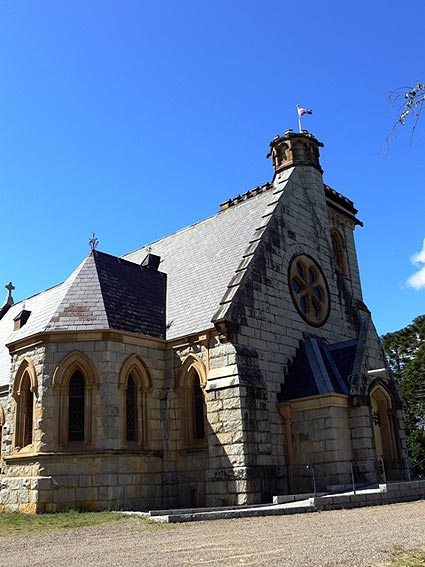 The architect chosen was Edmund T. Blacket, architect of the cathedrals of St Andrew's, Sydney and St Saviour's, Goulburn. Though the original design was his it is unlikely that Blacket ever saw the site of All Saints' (chosen by T.S. Mort) for he was not only very busy, but also ill at that time, so it was his son, Cyril, who carried it through its first stage (i.e. Chancel, Vestry, Organ Recess and the first two bays of the Nave). The builder chosen was Joseph Zeigler of Moruya under Blacket's supervision. The granite of which it is built was quarried on the Estate. The entrance door, with its intricate hand wrought iron hinges and straps and the stone font Within, were designed by E.T. Blacket himself A parclose screen divides the extension from the earlier part of the Nave, so that accommodation of small congregations is compact.

The foundation stone was laid by Thomas Mort's widow, Marianne (second wife) on 18th March, 1880. The service was conducted by John Selwyn, 2nd Bishop of Melanesia, who later married Mort's elder daughter, Annie, to whose memory the window in the Baptistry is dedicated. The building was finished in 1901. Still lacking the intended spire, it was consecrated by Archbishop Saumarez-Smith on the Feast of All Saints, the following year.

All the woodwork is of oak. The stained glass windows, the Chancel tiles the unusual reredos of marble mosaic, as well as the pipe organ, were brought from England. On the Chancel arch are Thomas Mort's last words: 'THINE EYES SHALL SEE ThE KING IN HIS BEAUTY. and beyond it the stained glass windows of the Transfiguration 1ight up the Sanctuary. This East window was the gift of the people of Bodalla in memory of T.S. Mort and his wife Theresa Shepheard.

The beautiful hand embroidered furnishings were the work of their daughters, the original festal altar frontal being made from Theresa Mort's wedding dress, while her wedding ring is incorporated in the stem of the silver gilt chalice. The oak light standards in the Chancel were turned from trees grown on Ernest Mort's property in Surrey and are a memorial to their youngest son, the Reverend Emest Mort.

The building cost £13,000 to erect. There are many tablets on the walls in memory of the members of the Mort family and various worshippers of the past." [2] 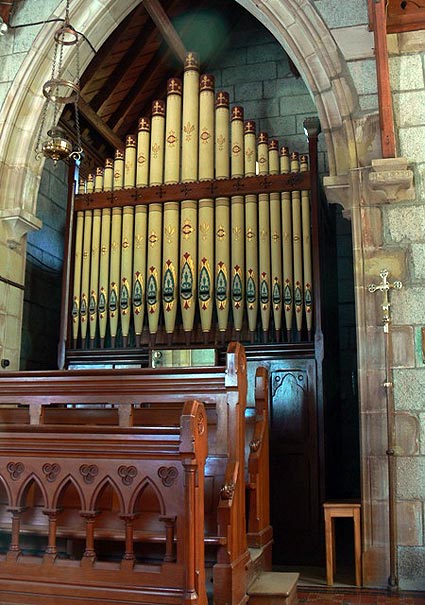 The organ, located in a chamber on the north side of the chancel was built in 1882 by Henry Willis & Sons of London, and is an outstanding example of the firm's multum in parvo tonal concept for small instruments. The voicing and integration of sound in the instrment do, indeed, suggest a much larger instrunent, with a brilliant Great chorus, fiery Cornopean (which adds to a hint of "full swell") and a solid pedal Bourdon. The structural design of the instrument represents the engineering finesse of a large and experienced firm, relying on both ingenuity and simplicity to provide an instrument of great mechanical durability and effective layout.

Over the years virtually no significant or permanent changes have been made to this organ: its rural location has provided an environment favourable to conservation. A partial restoration was undertaken in 1976 by Peter Jewkes and Anthony Welby and a full restoration by Peter D. G. Jewkes Pty Ltd took place in 1991. At this time new engraved stop domes of ivory replaced 1aminex discs supplied in 1957 and worn timber sections of the case were restored, with façade pipes cleaned and coated in clear shellac for protection. The bellows (together with feeders to enable hand-blowing), soundboards, pipework and action were carefully restored using traditional methods and materials. Peter Jewkes performed the re-opening recital on Australia Day 1992. [3] 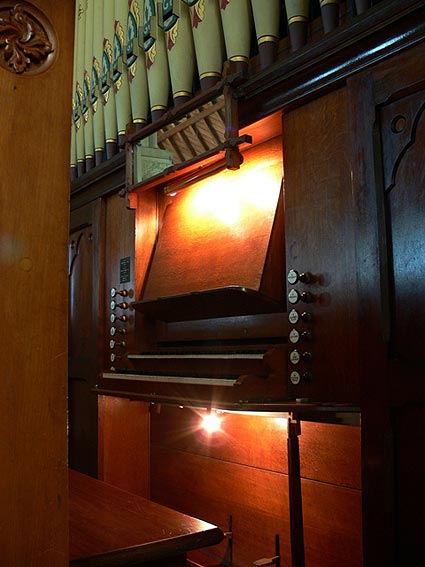 An idyllic remote South Coast location, a magnificently apportioned and appointed Blacket church of porphry (from a local quarry which supplied the same material years later for the pylons of the Sydney Harbour Bridge), and a delightful instrument by "Father" Willis, all make for a particularly pleasant workplace for a ten day stay. The much-loved 1882 ten stop instrument was restored by the Jewkes firm in 1991, but was due for routine cleaning and overhaul after 22 years of country dust had accumulated in it, exacerbated by building work in the church a decade ago. The present work, carried out in May 2013, also included replacement of some moth-eaten key felts. As at the time of restoration, every care was taken to preserve the remarkably in-tact mechanical and tonal integrity of this wonderfully versatile organ. 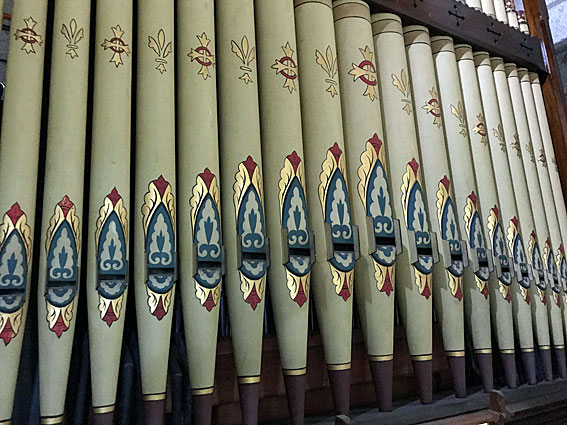 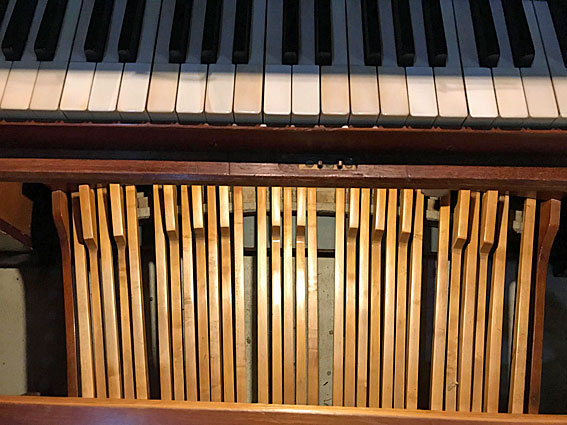 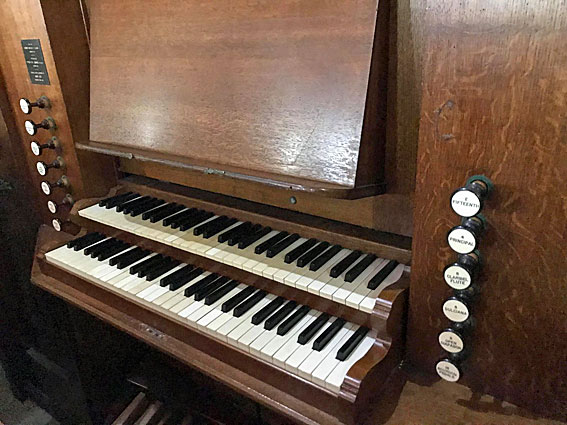 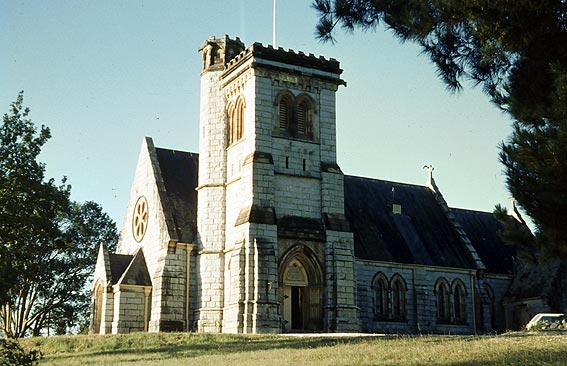