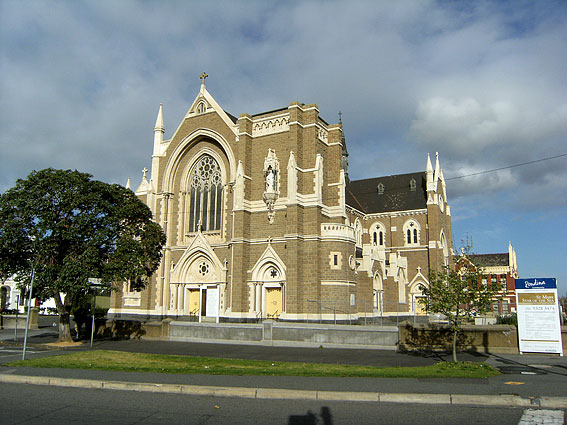 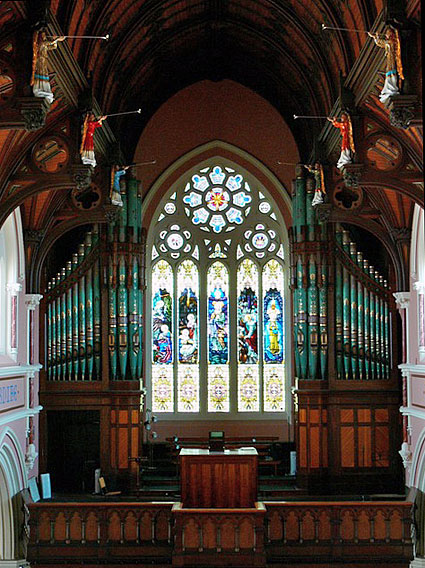 St Mary's Church was designed in a French Gothic idiom by Melbourne architect Edgar J. Henderson, whose other major church designs include St Mary's Cathedral, Sale, St James's Church, Gardenvale and St Mary's, Echuca.[1] The foundation stone was begun in 1891 and the completed building (apart from the tower and spire) opened on 18 February 1900. The total cost of the building was estimated at 27 or £28,000, and was among the most costly parish churches erected in Australia.

The building, of cruciform shape, includes an aisled nave of five bays, with tall clerestory, wide transepts, eastern chapels, and a two-bay sanctuary terminating in a tripartite apse. The total length of the building is 175ft, and the height to the roof ridge is 75ft, with an internal height of 60ft to the groined wooden ceiling, a magnificent example of Victorian craftsmanship. The building was designed to seat 1200 persons and is regarded as Melbourne's largest parish church.[2]

George Fincham was born in London on 20 August 1828. He was apprenticed to the leading London organ builder Henry Bevington and was later a foreman with J.C. Bishop, where he worked alongside Alfred Hunter and John Courcelle, who were later to export a number of fine organs to Australia.

Fincham arrived in Victoria in 1852 but did not proceed to build his first Australian organ until 1864. He established a factory at the corner of Bridge Road and Stawell Street in Richmond, which was progressively enlarged until it occupied a large block. In 1866, Fincham was awarded £100 pounds by the Victorian Government for establishing the organ building industry in Victoria.

Fincham’s instruments were widely sought after and in the ensuing years he built close to 200 instruments for buildings in Victoria, South Australia, New South Wales, Tasmania and New Zealand. His magnum opus was the grand organ of four manuals and 70 speaking stops, built for Melbourne’s Royal Exhibition Building, opened in October 1880.

Fincham exhibited instruments in a number of exhibitions both in Victoria and interstate. Invariably they received awards on account of their mechanical and tonal excellence.

In 1882 he established a branch in Adelaide under the direction of his former apprentice Arthur Hobday, who was later to become a partner until his departure to New Zealand in 1897.

Fincham used excellent quality materials in building his instruments. The metal pipework, in particular, was particularly fine, consisting invariably of spotted metal, although Belgian zinc was used for flue basses longer the 4ft from 1880 onwards. His wooden pipework was also skillfully made and voiced.

During the 1880s, Fincham developed and patented a form of tubular-pneumatic action which was used for all large organs from that date onwards. This enabled consoles to be detached from organs, a full range of couplers to be supplied, and pistons to be provided for adding and subtracting stops.

George Fincham's specification for a three-manual organ of 37 speaking stops was accepted by the church on 12 September 1898, the cost being quoted as ´£1,551. Later, it was agreed to incorporate a Mixture III ranks on the great and a Fifteenth 4ft on the pedal. The organ was installed in the church by 19 December 1899 and the instrument opened on 18 February 1900, the certificate of completion dating from 19 March 1900.

The organ was described in The Austral Light of February 1900:

The choir gallery provides ample accommodation for a large choir and instrumentalists, in addition to the organ, which was built by Mr. Fincham of Richmond. The instrument is complete, and contains about 2,500 pipes. It is built upon the pneumatic action from keyboard to stops and windchests. This action has entailed the use of no less than three and a half miles of tubing. The speaking pipes of the pedal, great and swell organ are 16ft, whilst in the choir organ they are 8ft. The labour of drawing and closing of the various combinations of stops is abolished. The organist, while fingering the key-board, uses the thumb to "press a button; pneumatic action does the rest." The richly-gilt and decorated pipes, and the stained case with the magnificent blackwood console, and the gallery front in blackwood and huon pine are a notable feature in the eastern end of the church. The cost of the organ was £1,600.

While building St Mary’s organ, in September 1899, Fincham suffered a paralytic stroke, from which he fully recovered. He admitted his son Leslie as a partner in the firm in 1900 which was henceforth known as George Fincham & Son. Fincham Sr continued to be actively involved as an organ builder until his death on 21 December 1910.

In May 1931 a cleaning and overhaul by George Fincham & Sons Pty Ltd took place at a cost of £200.00.0. In August 1931 balanced swell pedals were installed (these were converted back to trigger operation in the 1993 restoration as they worked very inefficiently and didn’t succeed in opening the horizontal shutters fully). In July 1948 the Fincham firm carried out further restoration work. This included new intermediate actions to the Swell, Great and Choir soundboards. The windchest pallets had originally been operated by external underactions placed closed to floor level and linked to the windchests by trackers. This obviated the need to run pneumatic tubing up to a higher level and resulted in shorter tube lengths and presumably faster action response. The 1948 work was executed in an unsatisfactory manner and the 1993 restoration saw the original mode of operation restored. The combination action was removed in the mid-1970s but all of the parts were stored and now replaced in the organ.

The comprehensive restoration of the instrument, by the South Island Organ Company Lid, of Timaru, New Zealand, began in early 1993 and the work was completed in September 1994, ranking as the most significant restoration project yet carried out on an Australian-built organ. The action, pipework and wind system were fully overhauled, while the later alterations were reversed. The casework was completely repolished, but the original stencilling was merely cleaned rather than repainted. It was the first pipe organ in Australia to be classified by the National Trust and is well regarded as an instrument of national importance. The organ is the largest example of 19th century colonial organbuilding to remain essentially unaltered.[3] 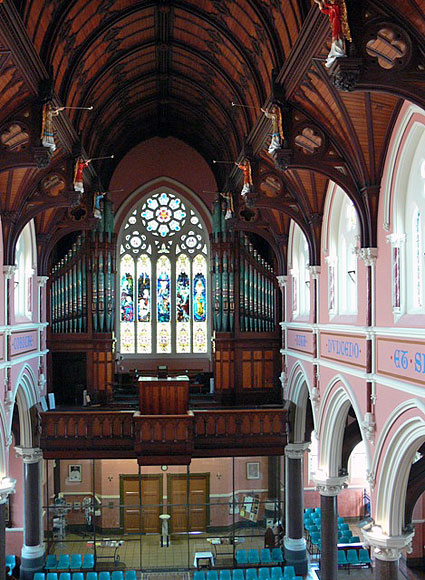 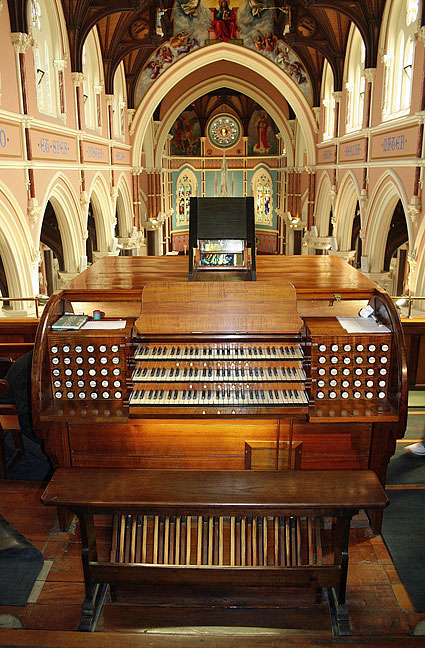 
Text on this page copyright © the Organ Historical Trust of Australia. 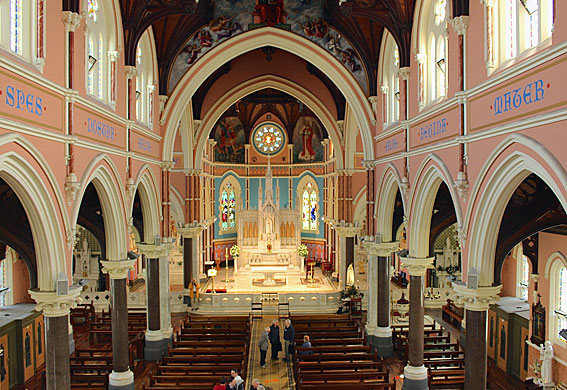 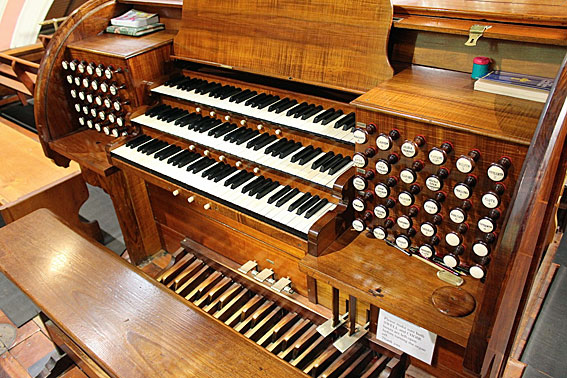 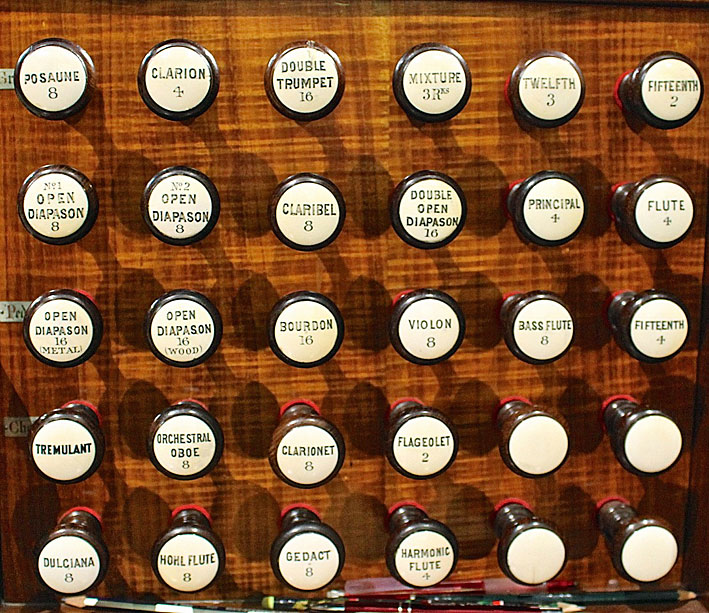 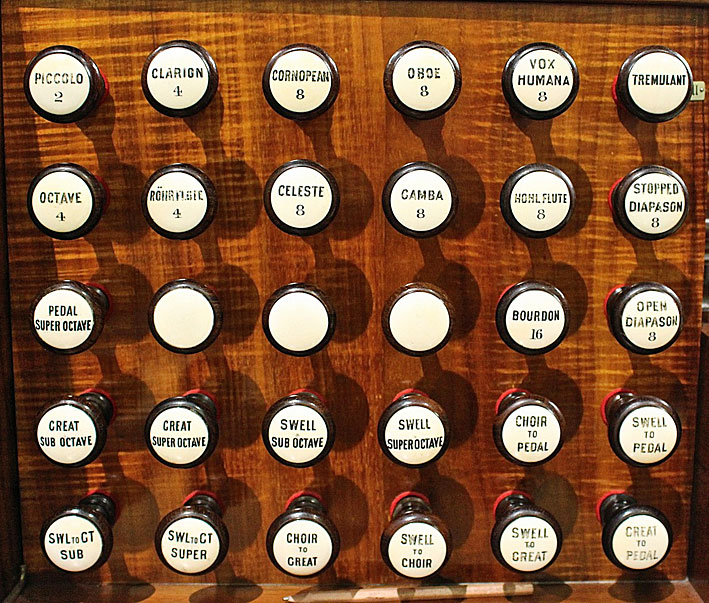 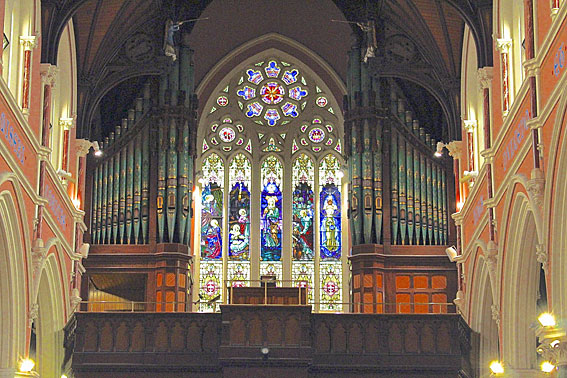 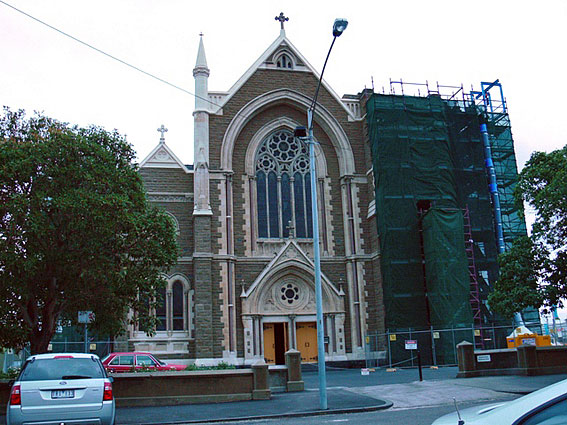 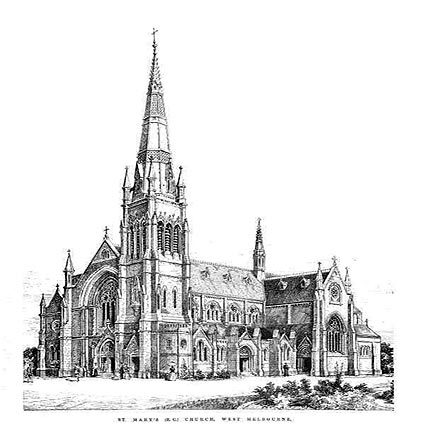 A copy of Edgar Henderson's original plans that included a spire. [JRM]