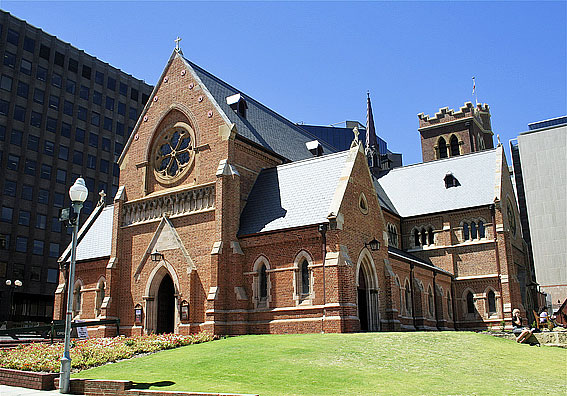 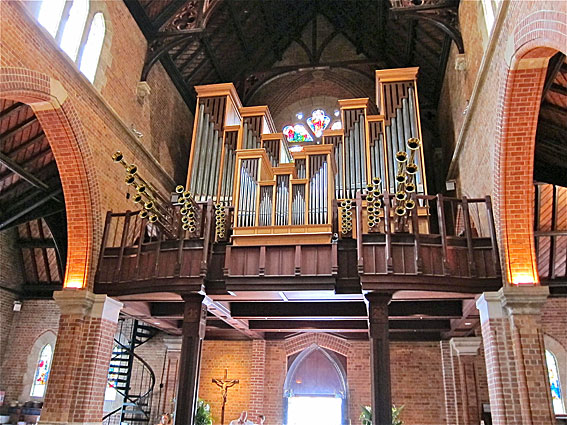 The earliest church on this site was in the classical style, not unlike such buildings as St George's Battery Point and the original St David's in Hobart.  The foundation stone of the present building, designed by the eminent NSW architect Edmund Blacket, was laid in November 1880 and the opening took place in 1888.  The cathedral is comparable in scale with Blacket's St Thomas' Church, North Sydney, but is constructed in red brick with Rottnest stone dressings both internally and externally;  the roof beams are of jarrah, a local timber.  It consists of a five bay clerestoried nave, with prominent flanking porches, lofty transepts and square–ended sanctuary.  The completion of the building was entrusted to Blacket's son Cyril as Edmund had died in 1883.  The firm had designed a magnificent tower and broach spire for the building, but the present crenellated tower with elevated stair turret was erected in 1902 to a reduced design by local architect Sir J.J. Talbot Hobbs.  The building incorporates splendid fittings, particularly a wide range of imported stained glass by such makers as Clayton & Bell, and James Powell & Sons, both of London, together with local makers such as Mathieson & Gibson, of Melbourne and Barnett Bros, of Perth.  The floors are of tessellated tiles.  The wrought iron chancel screen was added in 1906 and the carved alabaster reredos with its elaborate statuary in 1909.  The Soldiers' Memorial Chapel, built from Donnybrook stone and brick, was constructed in 1919, while the pulpit, font and north transept panelling were designed by George Herbert Parry.

The earlier organ of two manuals, 15 speaking stops and mechanical action, was built in 1874–75 by Hill & Son, London (job no. 1554) for the former building.  In 1903 it was enlarged by J.E. Dodd who added a third manual and converted the action to tubular–pneumatic.  This was the first work carried out by Dodd in WA and the planning of it resulted in the setting up of the WA branch of the firm in 1902, managed by his son Ebenezer Dodd.  A major rebuilding and enlargement took place in 1958 by J.W. Walker & Sons Ltd, of Ruislip, Middlesex and the majority of the instrument sited on a platform in the south transept, with the console and choir organ placed in a gallery under the tower.  This instrument was dismantled in 1994 by F.J. Larner and Co.;  the surviving Hill chests and pipework were used in an organ for St Hilda's Anglican Girls' School chapel, Mosman Park, while the Tuba went to St Patrick's Cathedral, Melbourne, and the console to St Paul's Cathedral, Bendigo.

The specification of the 1958 Walker rebuild was (1993 OHTA Conference Handbook):


There are now three organs in the Cathedral, all built by the Melbourne organbuilder Knud Smenge, two of which are electrically connected to an all–electric console at floor level.  The first instrument, a chamber organ, was built in 1987.

The west organ, sited on a new west gallery, was installed in 1993.  This has casework of Tasmanian oak, and includes a ruckpositiv division, placed on the gallery rail.  The facade pipes are of burnished tin.  The Pedal, Great and Positiv divisions are visible in the facade;  the larger pipes of the Pedal and the Swell are placed in a separate case to the rear.

In 2009 the South Island Organ Company cleaned and reset the speech of the flue stops. SIOC lengthened the resonators in 2008 of the 16' and 8' chorus reeds - but did not alter anything else with regard to the voicing other than correct a few bad tongue curves...the three 4' s, Oboe, Krummhorn and Vox Humana are untouched and simply regulate.  [updated details provided by Patrick Elms, December 2011]

The chancel organ, placed under the tower at the south–east junction of the building, speaking across the chancel, was built in 1993–94.  The Swell occupies a brustwerk position in the striking case front, in modern Scandinavian style. 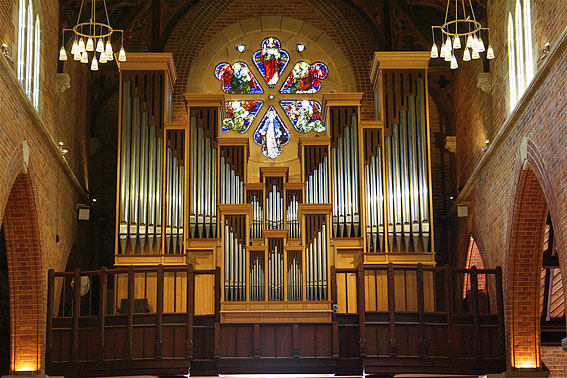 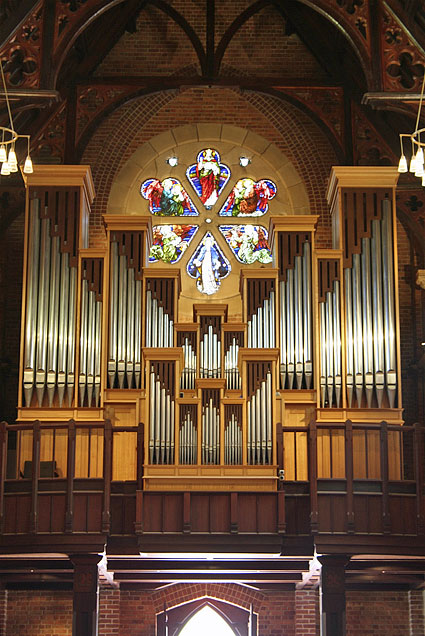 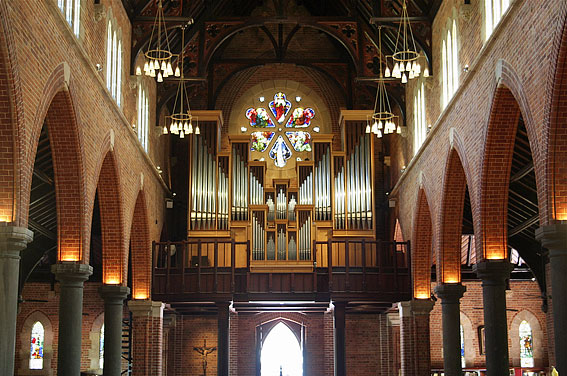 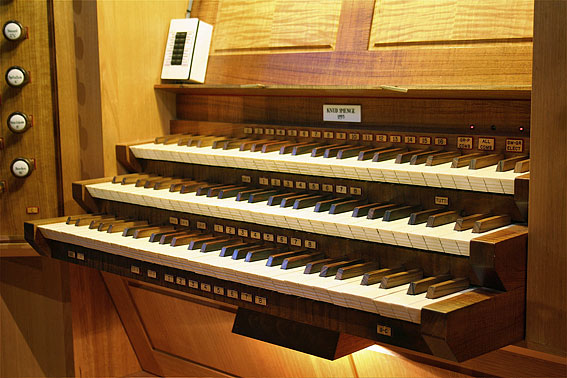 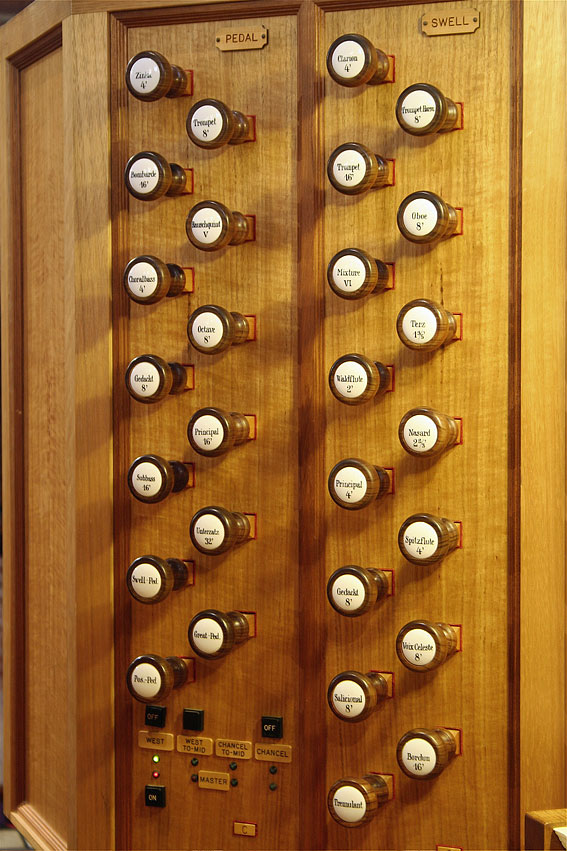 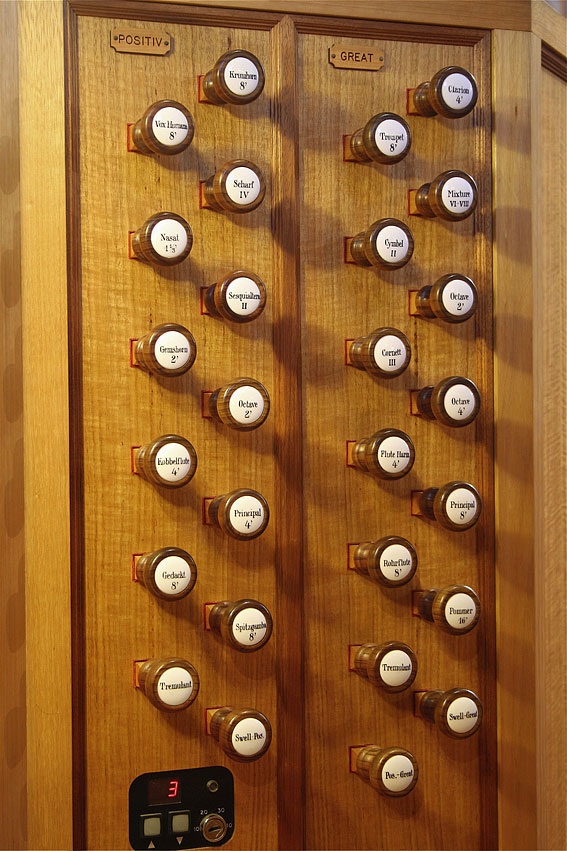 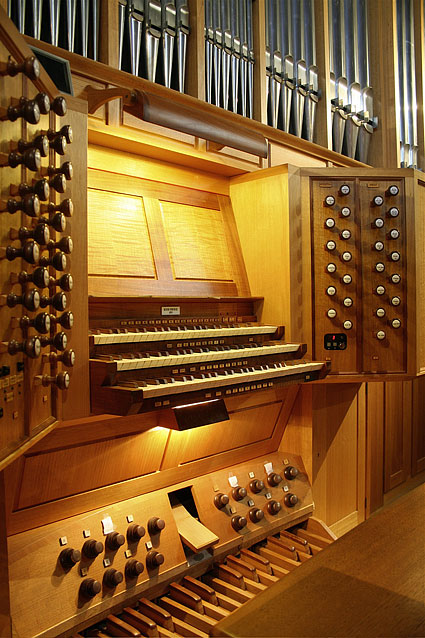 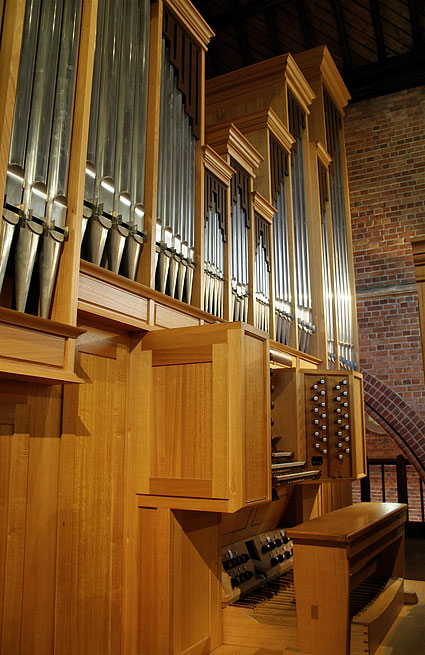 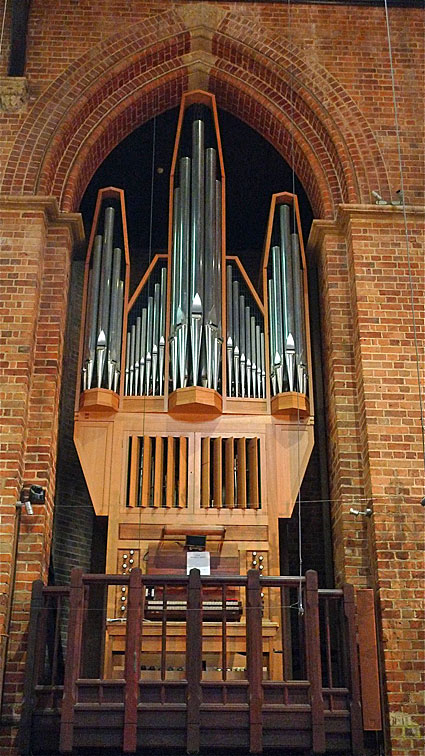 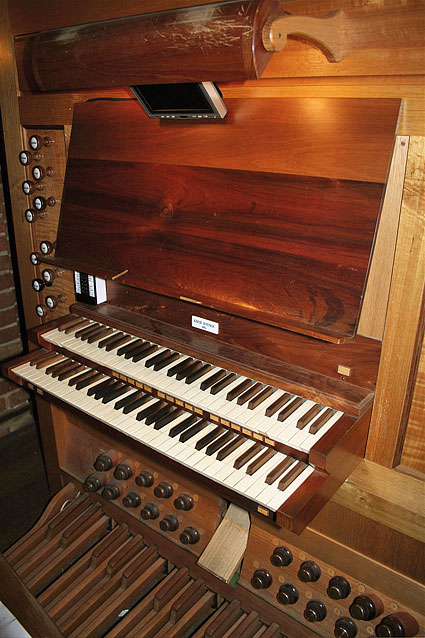 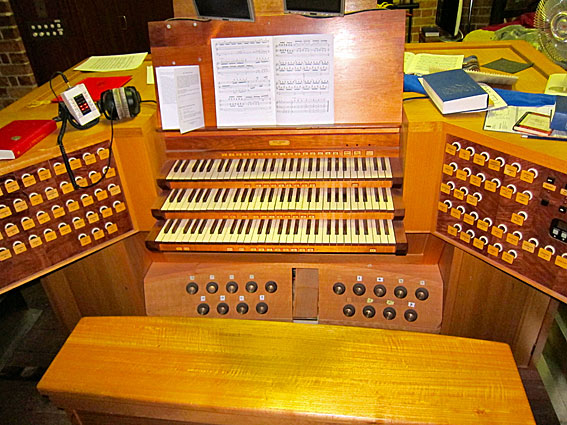 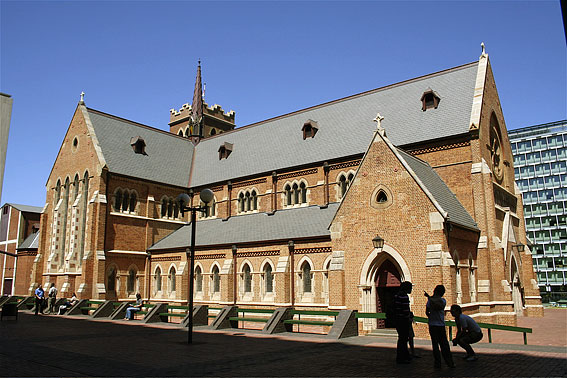 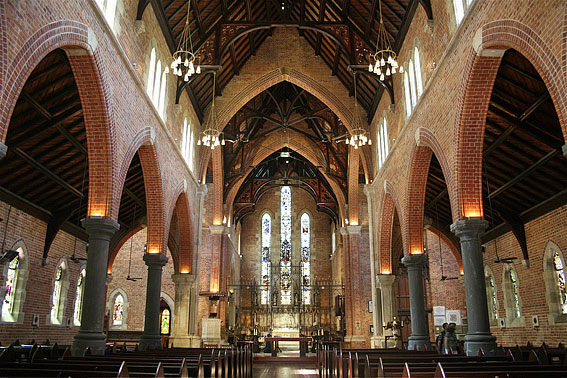 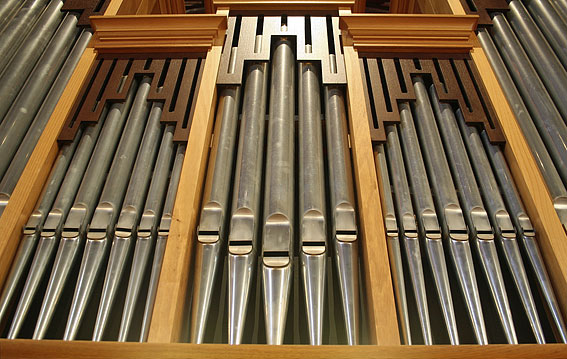 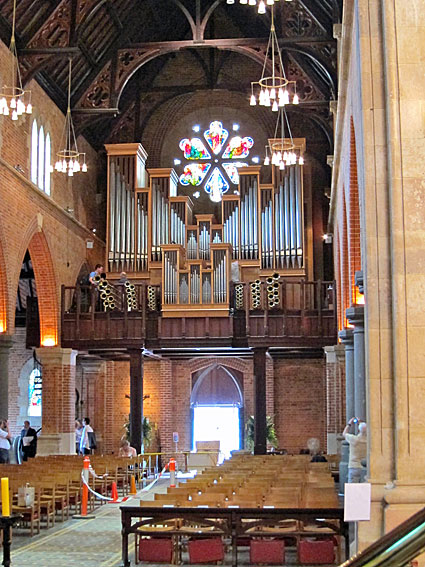 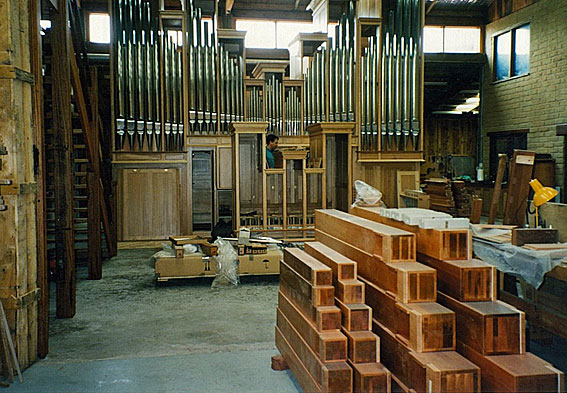 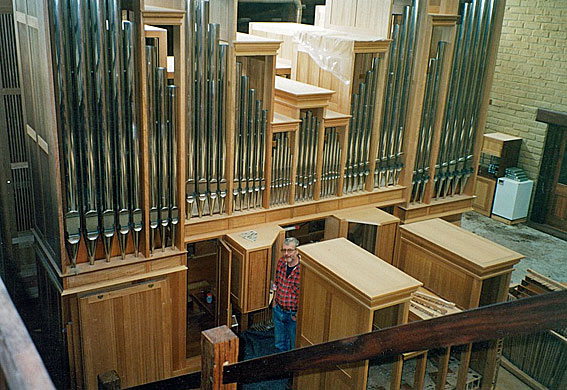