Sydney Grammar School is a non-denominational independent private GPS school for boys which today has an enrolment of 1,100 students across Years 7 to 12.  Founded by an Act of Parliament in 1854, it was opened in 1857 in premises occupied from 1835 to 1850 by its predecessor, Sydney College.

The School has long been widely respected for facilitating intellectual rigour and providing a rich extra-curricular program in which the new organ now takes an important place.  Under the present Headmaster, Dr J.T. Vallance, himself an accomplished organist and harpsichordist, music has continued to flourish and the school has embarked on an ambitious program entitled “Bach 2010”, in which the extant cantatas of J.S. Bach will be performed in concerts over the next five years.

Sydney Grammar School has a number of historic colonial buildings of various styles, together with several modern multi-storey blocks in which most of the teaching occurs today.  The ‘Big School’, with a seating capacity of 300, fronts on to College Street and was part of Colonial Architect James Barnet’s vision for a cultural focus in the centre of Georgian Sydney.  The ‘Big School’ (the oldest surviving schoolroom in the country) was opened in 1835 as the Edward Hallen building, home to the University of Sydney, but was purchased in 1855 by the Trustees of Sydney Grammar School. [1]

The ‘Big School’ was restored under the guidance of Sydney architect Howard Tanner, well known for his sympathy and respect for heritage buildings, and the work was completed with the installation of the pipe organ in 2004.  Additions to the building include the organ gallery and the College Street portico, which was prepared for in the original design, but never completed.

The new organ of 2004 is actually the second organ owned by Sydney Grammar School: the Music Department also possesses a chamber organ of five stops, built in 1997 by Bernhard Fleig Orgelbau, of Basel, Switzerland. (Also of note is the magnificent harpsichord made by our member, Marc Nobel, of Melbourne, and decorated with a splendid painting of colonial Sydney, showing the precinct of the school).

The 2004 Mander organ was built to a specification devised by music faculty, school organist and OHTA member Robert Wagner. Its installation was funded through the generous gift of an old boy, Dr Ian Dicker, as a memorial to his parents.  The case is made in stained American Oak, its design of three towers, double-storey flats and prominent cornices, being very typical of 18th century English models. The case of the c.1730 Abraham Jordan organ (now housing a

1991 instrument by William Drake), at Grosvenor Chapel, Mayfair, London, was an influential precedent. [2]   The whole project was overseen by the principal of the firm, John Mander.

From the tonal standpoint, the organ is designed to provide a distinctive sound that is new to Australia – and one quite different from that of the many other non-historic-copy organs imported here in recent years.  The disposition reflects classical English principles, but was designed to be versatile in teaching, the leading of singing, the accompaniment of choral works, and in recitals.  In this regard, it possesses two principal choruses, several solo tone colours, a 16’ Swell reed for both ensemble and solo use, while being tuned in Valotti temperament to enhance the purity of common intervals and therefore the musical enjoyment of Baroque works.  The console, based on Mander’s slightly larger instrument at St Agnes’ Church in New York City, is located on the left-hand side of the organ and has three rows of terraced stop knobs. It is generously fitted with an array of divisional and general thumb and toe pistons, as well as a sequencer. [3]   The specification is:

[1] Information on the school and its buildings obtained from Robert Wagner, and websites, www.sydgram.nsw.edu.au/CollegeSt/archives.html and

In 1996, Sydney Grammar School has signed a contract with Bernhard Fleig Orgelbau, of Basel, Switzerland, to build a chamber organ of five stops. This was the first Swiss organ ever imported into Australia. Consultants for the project were Philip Swanton and Robert Wagner.1 The organ was delivered in 1998. 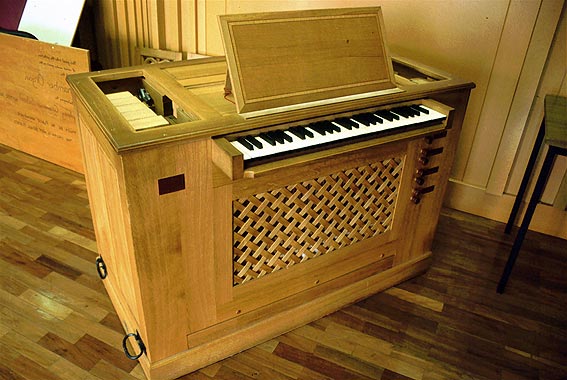 
Bernard Fleig is one of the few organbuilders who specialise in the construction of small instruments.

The Fleig chamber organ, Op. 46 differs markedly in tone from other earlier chamber instruments in Australia, moving away from the brilliance of neo-classicism towards a warmer, fuller sound. A feature of the organ is the divided Regal 8ft, which takes its scaling from the Christophorus Pfleger regal of 1644 in the Luzern Musical Instrument Museum, and has wooden resonators. Division of the Gedackt 8ft and Prinzipal 4ft also allows considerable versatility in registration using the Regal. The division is at middle C/C# at a =440Hz. The keyboard is readily transposable to a = 415Hz.

Bottom C# is omitted from the keyboard, the bottom pipe in each being made a little longer than usual to facilitate the provision of bottom C in both transposition positions.2

The specification of the Fleig organ is as follows: 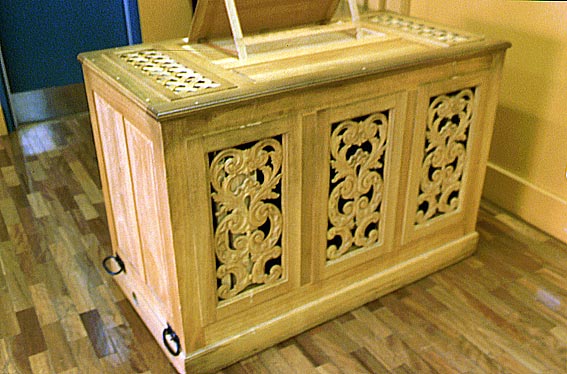 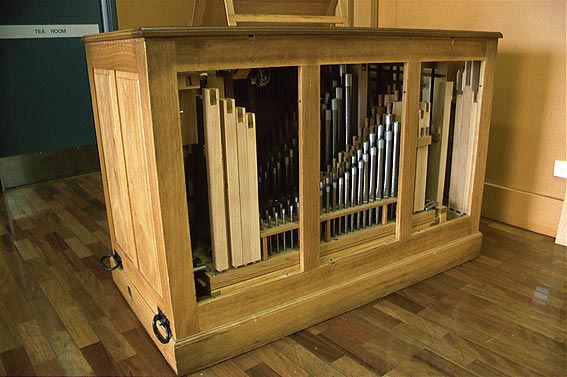 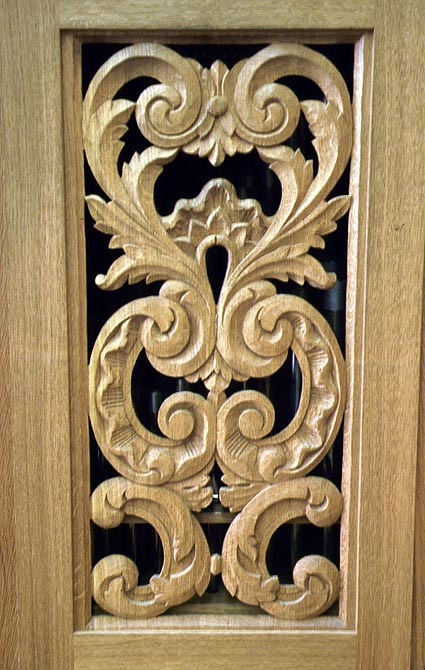