In 1792 five Catholic lay people (four men and one woman) who were resident in Parramatta petitioned Governor Philip to appoint a priest to minister to them and in 1803 it was announced by Governor King that Fr James Dixon was to fill the role. The first Mass in Parramatta was celebrated by Fr Dixon on 15 May 1803, but his appointment was revoked after the “Vinegar Hill Rebellion” at Castle Hill in 1804. [1]

Fr John Joseph Therry arrived in Parramatta in 1820 and set about obtaining a grant of land for a Catholic church, while establishing Australia’s first Catholic school in Hunter Street, Parramatta.  In 1836 the foundation stone for a church was laid by Bishop Polding, the building being opened in 1837.  In 1854 a new church was commissioned, based on a design by A.W.N. Pugin, although the tower was not completed until 1880, with the spire following in 1883. [2]

In 1936 the building was totally rebuilt to accommodate a larger congregation, although the Pugin-designed tower and spire were retained.  With the growth of western Sydney the Diocese of Parramatta was created and in 1986 St Patrick’s was designated a Cathedral.

The first organ in St Patrick’s was built in 1852 by J.C. Bishop, of London, for St Benedict’s Broadway – it  possessed two manuals and 12 stops.  It served St Benedict’s until 1892 when it was installed at St Patrick’s by Charles Richardson. This rare instrument survived largely in original condition until the early 1960s, when vandals removed much of its metal pipework, resulting in the instrument’s dispersal. [3]    In 1981 St Patrick’s acquired yet another second-hand organ, this time from the Grand Masonic Lodge in Castlereagh Street, Sydney.  Built in 1923 by Holroyd & Edwards, of Sydney, the organ (of two manuals and 10 speaking stops) had been electrified in 1970 by Pitchford & Garside, who also undertook some tonal modifications.

St Patrick’s was gutted in a fire that was set by an arsonist on 19 February 1996 and the Holroyd & Edwards instrument was totally destroyed.  There began a lengthy process to raise funds and develop designs for the rebuilding of the 1936 church (to serve as the Blessed Sacrament Chapel) and the provision of a modern new cathedral to adjoin it. The state government provided a multi-million dollar grant to assist the project.   The firm of Mitchell, Giurgola and Thorp (best known for its design of Parliament House in Canberra) was successful in being awarded the design contract and the completed building was opened on 29 November 2003.  The Pope's special envoy for the occasion, Cardinal Edward Cassidy, presided at the Mass.

The main entrance to the cathedral is through the western-side wall of the previous building. In the extension the presence of daylight is an essential element of its design and an emphasis on the central altar is achieved visually through a sculptured Aureole suspended above: this represents the work of the Holy Spirit.

Three senior artists working in different artistic media undertook the design and fabrication of the major works of art in the Cathedral, including Anne Ferguson working in stone, Tasmanian design/maker Kevin Perkins working in timber, and Sydney sculptor and jewellery designer Robin Blau, working in metal. [4]

In 1996 Sydney organbuilder, Peter Jewkes, became aware of a redundant tubular-pneumatic Norman & Beard organ of 1898, located in St Saviour’s Anglican Church, Walton Place, London, and advertised on the internet by noted English organ scholar and designer, Stephen Bicknell.  Fr Peter Williams (who has since been appointed Dean) quickly acted on this advice and the organ was dismantled by Manders and shipped to Australia for storage in a disused schoolroom on the St Patrick’s site in 1997.  Following the untimely death of Dr Christopher Dearnley in late 2000, Kelvin Hastie was appointed as the project’s consultant with a brief to draw up a tender document in conjunction with MGT, and to advise Fr Williams and the Diocese.

In 2002 Peter D.G. Jewkes was engaged to restore the soundboards, reservoirs and pipework with minimal alteration, to redispose the various divisions on most of the existing frames, to rebuild the action as electro-pneumatic, to rebuild the console retaining the original keys and stopknobs, and to place the instrument behind a new case and façade. (Retention of the Knightsbridge case was not viable, as the instrument had been located in a chamber). The façade issue was the source of considerable discussion, as the architects initially preferred a werktreu approach, with grilles and pipe shelves, through which the interior of the instrument could be viewed.  Fortunately, Stephen Bicknell expressed an interest in designing a façade and following his appointment in 2002 it was resolved to adopt his design, produced in collaboration with Romaldo Giurgola – a “wall” of tin pipes, in a sequenced pipe rack.  The massiveness of the 16-foot front suggests the mechanical and tonal bulk of the nineteenth-century instrument behind it, while its curves reflect the geographic west end of the building.

The instrument is noteworthy for the brilliance and cohesiveness of its choruses, which are immense-loud, rather than aggressive-loud, its superb reeds (including the splendid high-pressure Tromba and Swell reed chorus), and the kaleidoscope of tone colours available in the array of flutes and strings.

^ The 1898 console had 5 pistons to Swell, 4 pistons to Great, reversibles for

Composition of Great and Swell Mixtures:

(designed and drawn by Stephen Bicknell) 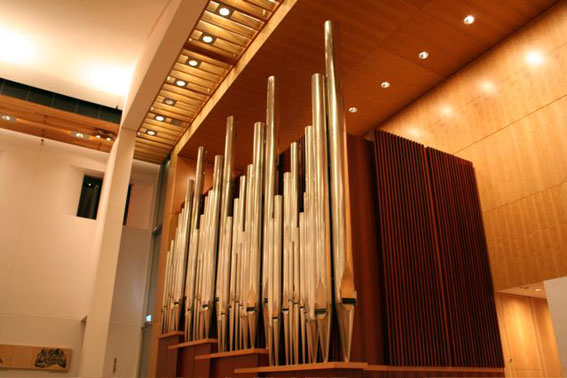 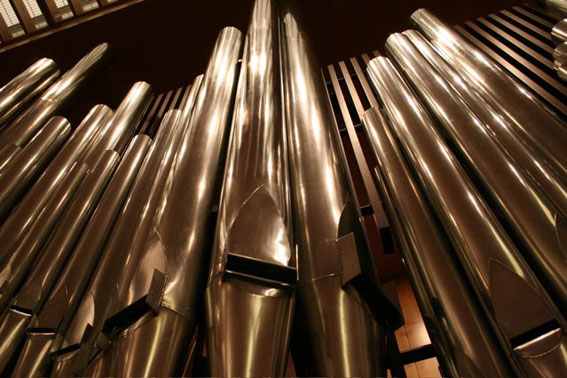 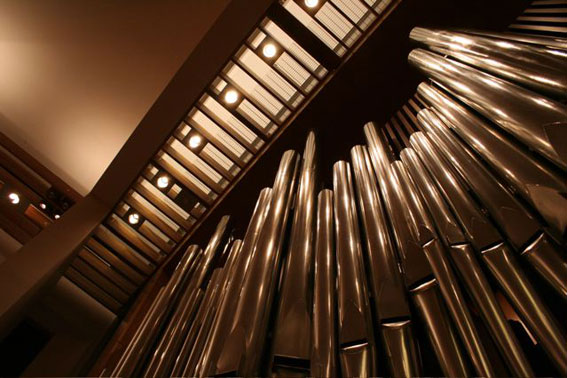 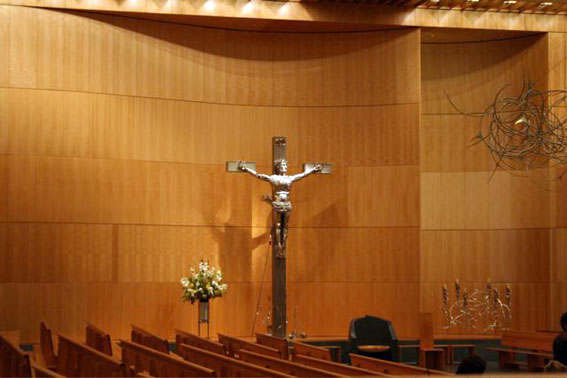