This cruciform building was opened in 1859 [it is the oldest remaining church in Newcastle] and designed in the Early English Gothic style by architect Edmund Blacket.  It is constructed of rendered brick with stone dressings and includes a nave, with paired lancet windows, and transepts.  The interior includes stained glass windows and a hammerbeam roof. [1]

The splendid pipe organ by J.W. Walker, of London, housed in an attractive Gothic case, was built in 1866 as job number 832.  Costing £305/15/-, it was originally erected at the west end of the nave.  In 1966 the instrument was restored by Arthur Jones of Sydney, who acted as agent for J.W. Walker & Sons, then at Ruislip, Middlesex.  A new pedalboard was added at this time and the casework and display pipes were repainted.  The hand-blowing mechanism was also removed at some stage.

In spite of the changes, the instrument survives in a remarkably pure state of preservation, with cone tuning retained, its sprightly tone being characteristic of Walker organs of the period. The double-rise bellows and weights survive, as well as the stopknobs, engraved stop domes, keyboards, keycheeks, composition pedals, swell shutter control, builder’s nameplate and telltale. [2]   Two vacant sliders are still available to complete the tonal scheme: a Great Flute 4 and Swell Oboe 8 were envisaged by the Walker firm.

Compass 56/30 (Note: All Swell stops of 44-note compass. The lowest octave of Swell manual plays only C-B of the Great Stop’d Diapason Bass) 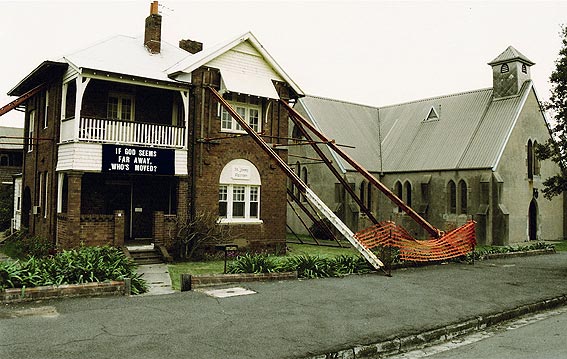