The mother church of Congregationalism in Australia,  the foundation stone of the Pitt Street church was laid in 1842 and the building opened for worship in 1846.  It was designed by English-trained John Bibb (1810-1862) who in 1832 joined John Verge, one of the leading architects in Sydney, as an assistant.  It was enlarged between 1857 and 1867, but the architect of this work is unknown.  This included the internal galleries, resting on fluted iron columns cast by Dawson of Sydney, and the vestry to the rear.

The building is of particular note for its distinctive classical sandstone façade with massive Ionic columns, pedimented doorways and balustraded parapet.  The spacious and uncluttered interior, with plaster ceiling, is of rectangular shape, the organ apse with rounded edges providing an ideal acoustical setting for the 1910 Hill & Son organ.  The joinery is of cedar and includes a pulpit approached by a winding stair.  Bibb's other work included the present Westpac Bank and Museum at The Rocks. [1]

It is believed that four pipe organs have stood in Pitt Street Church.  The first, of two manuals and ten stops was built in Sydney by W.J. Johnson in 1845 and enlarged by him in 1850 and 1857. [2]   The church’s next organ, by Gray & Davison of London (opus 10,043, 1856, 15 stops) was purchased second-hand in 1858 and survived until 1902 when a much larger instrument built by W.G. Rendall of three manuals and 37 stops was purchased second-hand. [3] Never fully completed nor considered satisfactory, it was one of the earliest examples of electro-pneumatic action in Australia. A remnant of this instrument is the small case in an alcove above the rear gallery, behind which a set of “gongs” (almost certainly a metallophone) was operated electrically. [4]

The present instrument, built in 1910 by Hill & Son, London, as job no. 2396, is one of the firm’s best-preserved later instruments and one of the few larger organs from the first two decades of the 20th century to survive in Australia with tubular-pneumatic action intact.

For over 50 years, Pitt Street’s famed organist, Miss Lilian Frost, delighted capacity audiences with her lunch-time recitals, which by 1945, had numbered over 1,000. Well-known for her preference for original works, including a substantial French repertoire, Lilian Frost was apparently well satisfied with the tonal and mechanical resources of the organ, the only addition being the Vox Humana and tremulant, almost certainly provided by Charles Richardson c. 1920.  Later alterations included the provision of a concave/radiating pedalboard, the fitting of balanced swell pedals and the enclosure of the choir division.

During the 1960s the organ and church were allowed to fall into disrepair, but the loss of the building altogether was prevented by a ban imposed by the Builders’ Labourers’ Federation in 1973.  Some basic work to bring the organ back into use was carried out in 1974 by Pitchford & Garside: in 1982 the firm commenced a staged restoration project with Kelvin Hastie as consultant and this was assisted by a NSW Heritage Grant.  The prepared-for stops were added by the firm between 1987 and 1996 based upon Hill models, a generous donation by a member of the congregation enabling this to occur.  The instrument today is remarkably intact, with the original mechanisms preserved in their entirety and the open metal chorus work retaining cone tuning throughout.

Mechanical action for all pedal couplers

Balanced pedals (on right) for Swell and Choir

Mixture composition (same for both Great and Swell)

[4] Ibid., 144-45. The Rendall was sold to Charles Richardson who rebuilt it with tubular-pneumatic action, reduced its size and installed it in Mary Immaculate Catholic Church, Waverley in 1909.  It was displaced by a Fincham organ in 1979. 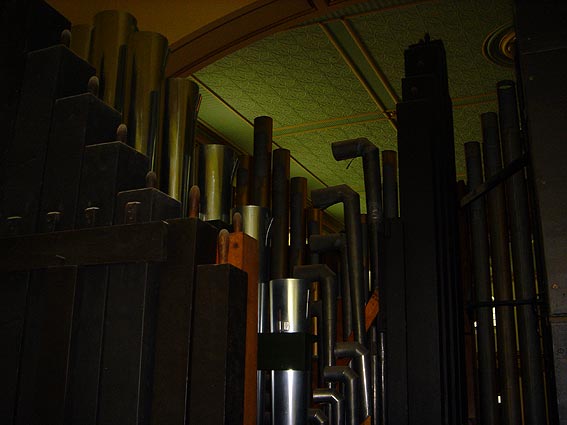 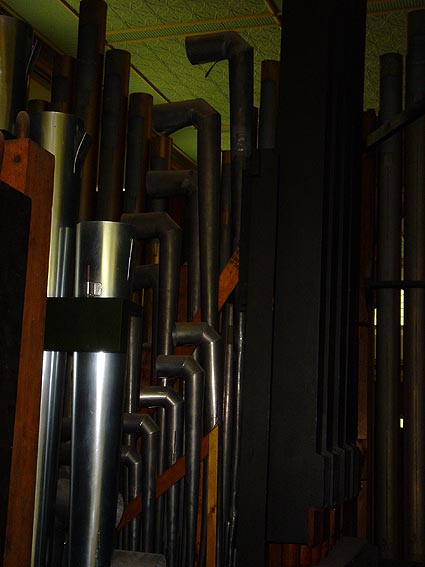