The Grand Organ was designed and built, during the period 1969 to 1979, by the Sydney organ-builder Ronald Sharp, assisted by Mark Fisher, Myk Fairhurst and Raymond Bridge, his personal staff.  During the final 17 months of construction, four members of the Austrian organ-building firm of Gregor Hradetzky, were on site, also working under Sharp’s supervision and specification, to assist with the work.

Sharp’s organ-building career began in 1960, when he was commissioned to build a new choir organ for Sydney’s St Mary’s Cathedral. In 1964 he then employed Raymond Bridge, a cabinet-maker, together with Mark Fisher who, like Sharp, was a self-taught organbuilder. The new organ at Knox Grammar School in 1966 was the first product of this team and the instrument won the admiration of English organist Peter Hurford, who recorded for Decca on both the Knox organ and the new organ, also by Sharp, for Wollongong Town Hall.

Hurford was invited to become consultant for the Opera House organ; and his admiration of Sharp’s work, which by then had attracted worldwide acclaim, led him to recommend Ronald Sharp to the New South Wales Government Organ Committee to be the builder of the Concert Hall organ.

Many people doubted that such a huge pipe organ, as proposed by Sharp, particularly one using mechanical key action, could be built by him - or anybody. Controversy raged throughout the construction years, until finally Sharp’s magnum opus was completed at a cost of 1.2 million dollars, under the supervision of the NSW Department of Public Works, which was also responsible for supervising the construction of the Sydney Opera House. The Department handed over the completed instrument to the Opera House Trust on 30 May 1979 and the opening recital was on 7 June 1979.

The Concert Hall Grand Organ is still believed to be the largest mechanical-action organ in the world.  It is 16 metres high, 13 metres wide, a total of 8 metres deep and weighs 37.5 tonnes. The four largest pipes of the Prinzipal 32’ hang on the rear wall and weigh an additional 6 tonnes. The organ is built on a cantilevered steel platform, overlaid with a 100mm thick floor of laminated brush-box timber and it is all contained in a shell-like concrete chamber. The underside of the platform carries the white birch plywood ceiling above the choir gallery.

In April 1994 Mark Fisher, who shared a major role in the design and building of the organ, and who left Ronald Sharp at the end of 1981 to commence his own business, was invited by the Opera House Trust to return to the organ, to take control of its ongoing maintenance and tuning. During that time, gradual refurbishment of some sections of the organ has been carried out together with other work, all carefully maintaining the philosophy of the builder.

In July 2001, the organ was shut down, while its original electronic control system was replaced, with a more comprehensive system. During this changeover, the stop jambs, name board, thumb and toe piston rails were rebuilt with other new sections of the console added, together with a performer’s consolette, in order to accommodate discretely the many new controls. The organ was re-opened in April 2002 by Olivier Latry and has since been in regular use, though not often heard in solo organ recitals.

The organ contains six departments: Pedal, Rückpositiv, Hauptwerk, Oberwerk, Brustwerk and Kronwerk.  There are 131 speaking stops, 201 ranks and 10, 244 pipes. The façade contains 109 burnished tin pipes and 24 bronze bells. The largest and smallest pipes have speaking lengths of 9.7 metres and 6mm. The organ’s wind supply is generated by nine blowers situated throughout the organ.

The organ has mechanical key action, electrical stop action, mechanical and electrical couplers and a Solid State Logic CFM300 piston capture system. It is also fitted with a performance recording and playback facility for the performers use in evaluating registration; and for organ demonstrations, where the playback unit can be operated from three locations within the Concert Hall.

An electronic upgrade, held over from 2002, was completed in October 2008 by Adrian Wadey of Solid State Organ Systems (UK).[1]

100 levels of memory available for each piston

A piston sequencer is fitted to the capture system

4 (3 adjustable) crescendos for each memory

2 channels of MIDI per department

The scope of any department, general  or reversible pistons is alterable

electric action to percussions and playback

SUMMARY OF PIPES AND STOPS

The Organ is fitted with a performance recording and playback facility for the performer's use in evaluating registration; and for organ demonstrations, where the playback unit can be operated from three locations within the Concert Hall.

Speaker – to organist from stage

*Numbers refer to those shown on the drawstops

During 2020 the Concert Hall was closed for a complete refurbishment during which time the organ was sealed up and covered. 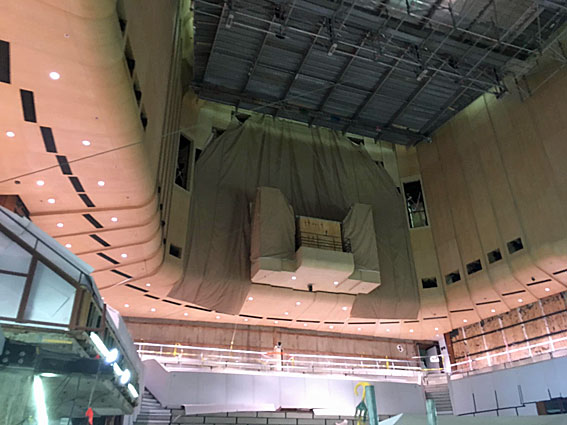 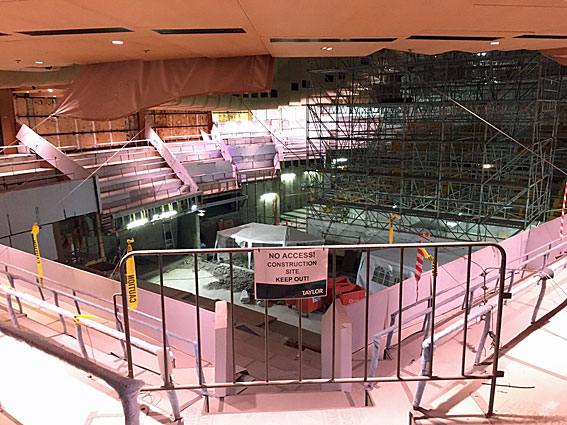