The first Anglican church in Newcastle was built in 1817 by order of Governor Macquarie.  It was a small building with a nave 64 feet in length, a tower and spire, and flanking school rooms at the west end, and a circular apse at the other end.

The Sydney-based architect John Horbury Hunt produced detailed plans for a new cathedral in 1875.  A new schoolhouse, or pro-cathedral, was erected in 1883-84 to Hunt's designs, pending the completion of the cathedral itself; and the congregation remained there until 1902.  Hunt was born at St John, New Brunswick, Canada in 1838, trained in Boston with Charles Sleeper and Edward Cabot and arrived in Sydney in 1863 where he worked for a period with Edmund Blacket, before starting his own practice in 1869. He died in Sydney in 1904 and is remembered as one of the great architectural innovators of the period. [1]

On 2 June 1892 the foundation stone of the present cathedral was laid.  Owing to disputes with the architect and problems with cash flow, building stopped for some years.  In November 1902, the unfinished building was dedicated, the nave and chancel covered with a temporary roof above the aisles.  In 1912 the chancel roof was raised and in 1928 the nave roof was raised to its full height and the base of the central tower completed.  This work was all completed under the direction of the Diocesan Architect, Frederick George Castleden, who modified numerous elements of Hunt's design.  He altered the east end through the insertion of the three arches leading to the ambulatory (based upon Abbey Dore in Herefordshire) and designed the Warriors' Chapel of 1924, an inspiring memorial to those who fell in World War I.  In 1979 the transepts were raised to their full height and the central tower completed to a modified design.  The 1989 earthquake resulted in major structural damage, but all has now been restored and the building reinforced through the insertion of four kilometres of hidden steel rods. [2]

This is one of Australia's major ecclesiastical monuments, impressively placed on an unrivalled site where it dominates much of the city and harbour.  It is of note for its overall stylistic originality, harkening back to Hunt's original design, sparing Gothic detail, imaginative use of unadorned brickwork, massive forms and overall spaciousness.  The building contains many outstanding fittings including stained glass designed by Burne Jones and executed by the Morris firm, nave windows by C.E. Kempe, font and oak canopy and the bishop's throne designed by noted English architect W.D. Caröe and metalwork in the Warriors' Chapel made by the noted Arts and Crafts artist, William Mark. [3]

The present cathedral and it predecessors have contained three organs.  The first small instrument was installed in 1834 as a barrel and finger organ of some four speaking stops: its maker has not been confirmed, although an inscription inside the instrument suggests it could be the work of Benjamin Flight, of London.   This instrument was sold to St Paul’s Stockton in 1870, and from there to a variety of other owners (including former OHTA Council Member, The Revd Michael Johnson, of Tasmania): in 1992 it was acquired by the Powerhouse Museum in Sydney.    In 1885 Christ Church purchased a two manual, fourteen-stop organ from George Fincham, of Melbourne, and this was installed in the new Cathedral in 1902, but sold in 1906 to St Nicolas’ Anglican Church, Coogee, where it survives today, basically unaltered following a restoration by Pitchford & Garside in 1982-84. [5]

The present organ was built in 1906 by Norman & Beard Ltd, of Norwich, and possessed three manuals, 30 speaking stops and tubular-pneumatic action. Originally built with the case now facing into the chancel, its specification was prepared by Sir George Martin, organist of St Paul’s Cathedral, London.  It was moved to its present loft position in 1912 [6] and in 1922-23 the Cathedral Chapter engaged Holroyd & Edwards of Sydney to enlarge it to four manuals and 38 stops, providing a transept case and relocating the console to the floor. [7]

The 1923 (post-Edwards) specification is below: 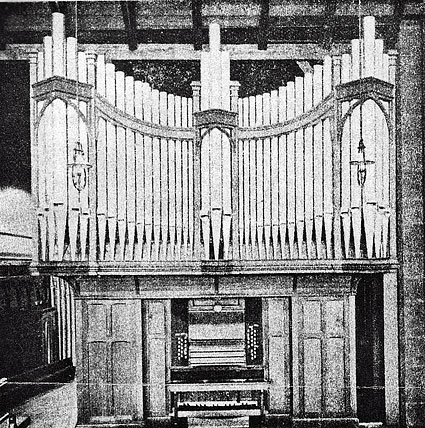 The organ was rebuilt and substantially enlarged to 55 stops by J. W. Walker & Sons, of Ruislip, Middlesex in 1963, and tonal finishing was undertaken by noted voicer, Walter Goodey. In 1979 the organ was cleaned and re-erected by J. W. Walker & Sons (Aust.) Pty. Ltd., following its dismantling for the erection of the central tower and completion of the transepts.  Earthquake damage in 1989 necessitated further work on the building and the organ was placed behind protective covers.  In 1991 the Cathedral announced plans to carry out a refurbishment of the organ and console, including the provision of a new solid-state combination action and sequencer [A J & L Taylor of Lancashire], a humidifying system and the prepared-for Stopped Diapason (Great), Vox Humana (Swell), Contra Trombone (Pedal) and the bottom octave of the Tromba unit.  The work was completed by Peter D.G. Jewkes Pty Ltd in 1998. The new metal pipework was made in England by P & S Organ Supply Co. to exact Norman and Beard scales and the Stopped Diapason was made of African and Tasmanian timber by George Stephens of Adelaide.

Choir (from ranks D and E) 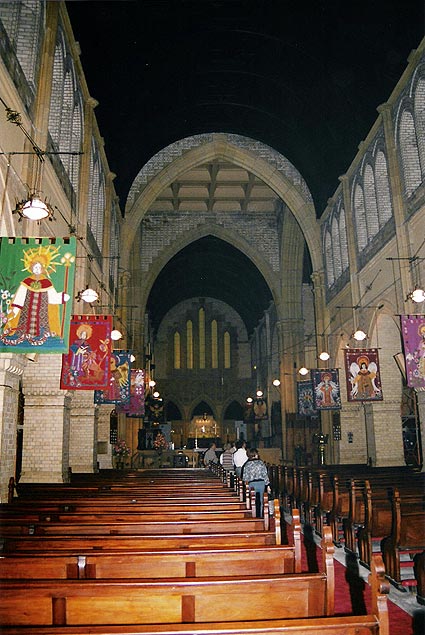 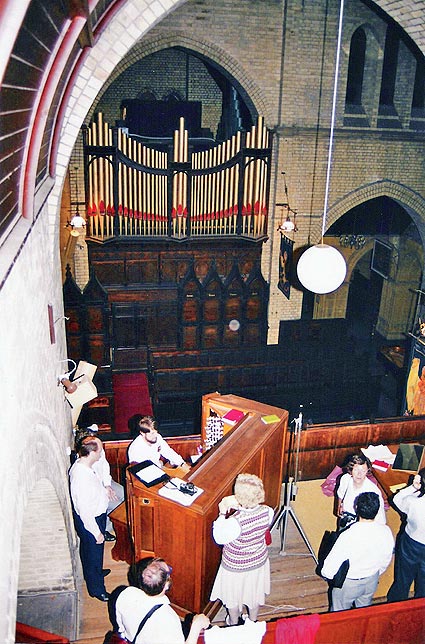 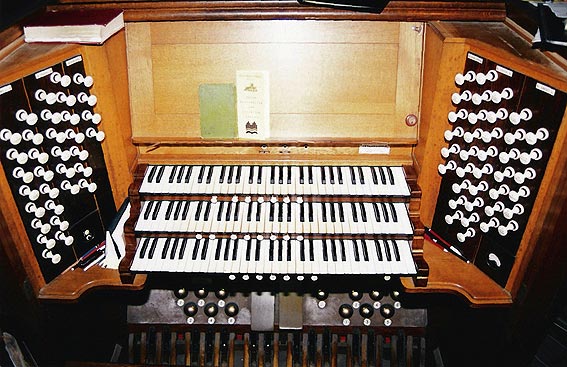 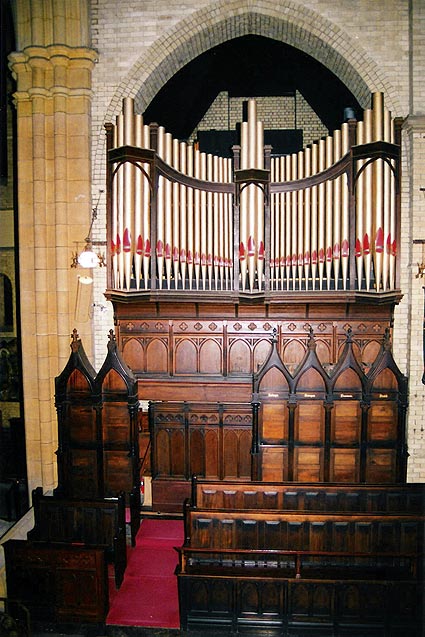 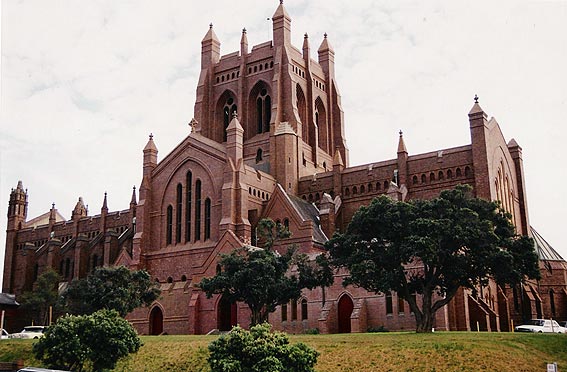 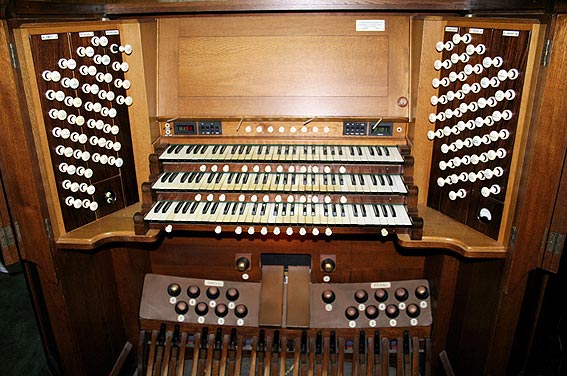 [5] Information collected by Kelvin Hastie for the forthcoming edition of the Gazetteer of New South Wales Pipe Organs.