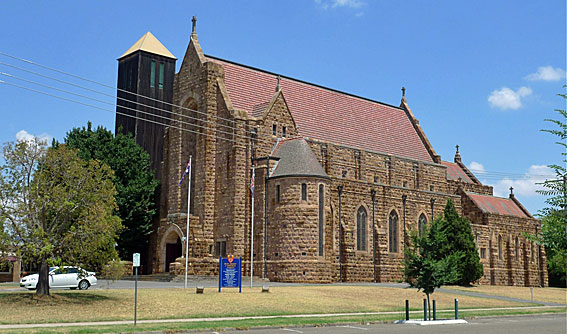 The earliest Anglican church building in Wangaratta was built in 1856 to the designs of James Dobbyn. The present cathedral was designed Walter Butler of firm of Butler & Bradshaw; Walter Richmond Butler was an accomplished English-trained architect with direct links to the English arts and crafts movement. The design was completed in stages. The first section, comprising half of the present nave, with wooden ends, was opened in 1909. The sanctuary and choir, lady chapel and vestries were opened in 1924. The final section, comprising the façade, baptistery and the raising of the roof to its full height of 85 ft (to the top of the gable crosses), was completed in 1965 to the designs of Louis Williams, who modified Butler's original (unpopular, but avant-garde) plans that envisaged two slim towers at the west end with thin tapered spires. The building was constructed of brick externally faced with granite. Internally, the brickwork is used imaginatively, with diaper patterns in black brick while the aisles are ingeniously tunnelled through transverse arches. The temporary tower houses a peal of eight Rudhall bells cast in the early 19th century for St George's Church, Bolton, in the UK. The cathedral stands in the middle of a splendid close of almost seven acres. Stained glass includes windows by Auguste Fischer in the nave and porch and Brooks Robinson in the Lady Chapel.

Earlier organs in the building have included (1) a 1900 instrument by George Fincham (one manual, five speaking stops) moved in 1926 to Holy Trinity Anglican Church, Benalla and broken up in 1968; (2) A two-manual organ of 14 speaking stops by an amateur organbuilder possibly named Svensson installed in 1926 in the chancel organ chamber that was moved to St Peter's Anglican Church, Murrumbeena in 1970, where it survives unaltered; (3) A three-manual mechanical action organ of 22 speaking stops and six couplers built in 1883 by Alexander Young & Sons of Manchester for the Presbyterian Church, Stoke Newington, London - installed in 1970 by J.W. Walker & Sons, this was rebuilt with many alterations in 1982-83 by George Fincham & Sons Pty Ltd and had three manuals, 25 speaking stops, mechanical and tubular-pneumatic action. It was sold in 1993 to Richard Zwar of Broadford. 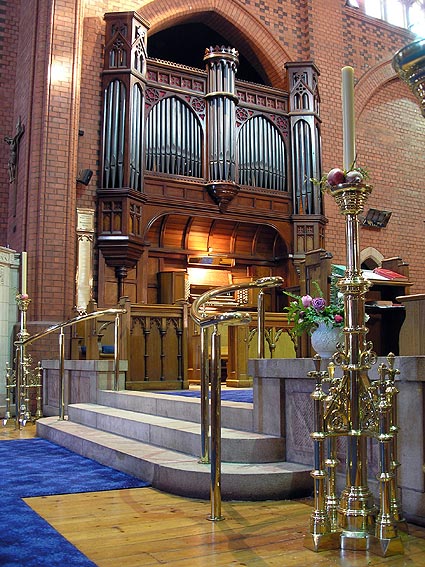 The main organ in the building was built in 1922 by Henry Willis & Sons and Lewis & Company Ltd, of London, for the Second Church of Christ Scientist, Rathmines, Dublin. The scheme was drawn up by Dr G.P. Hewson, of St Patrick's Cathedral, Dublin. It predates Henry Willis III's visit to E.M. Skinner in the United States and differs mechanically and tonally from his later instrument of 1927 at the First Church of Christ Scientist, Melbourne. It was rebuilt and installed for its present location in 1993 by Kenneth Jones & Associates, of Bray, Ireland in consultation with Ray Holland. The instrument incorporates the casework and spotted metal façade pipes from the Alexander Young organ; the Willis 16ft façade pipes are now placed internally. The swell is placed over the choir organ (both with horizontal shutters), slider chests are used for the manual divisions, and wind pressures range up to 12" for the Harmonic Trumpet and Ophicleide. The Willis console has been refitted with new actions, drawstops and pistons. The Trumpet 8 is an addition from 1993. 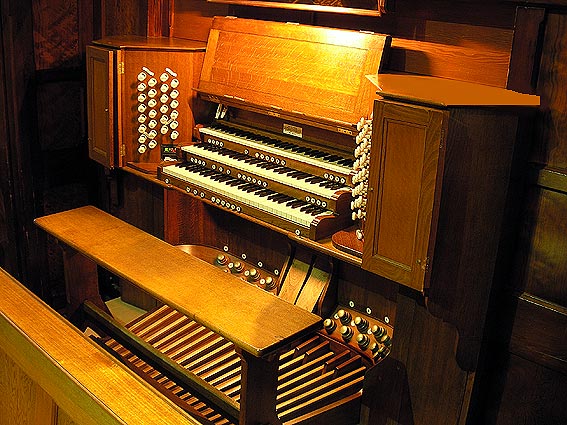 Colin Holden, Church in a Landscape: a History of the Diocese of Wangaratta. Armadale, Vic.: Circa Books, 2002. 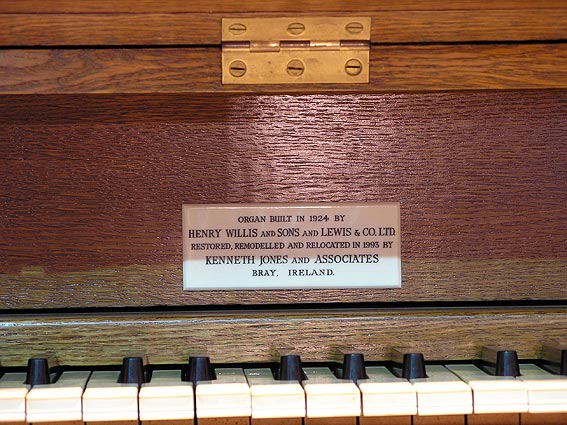 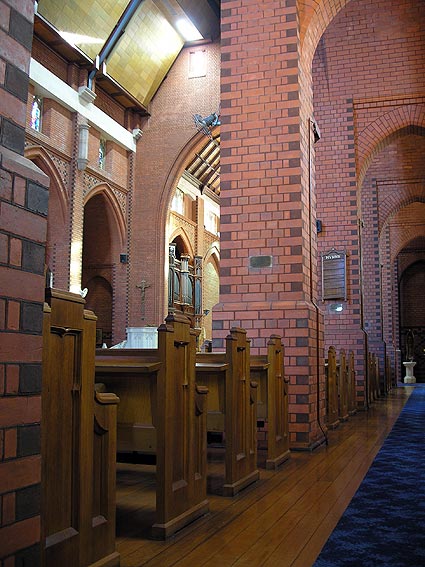 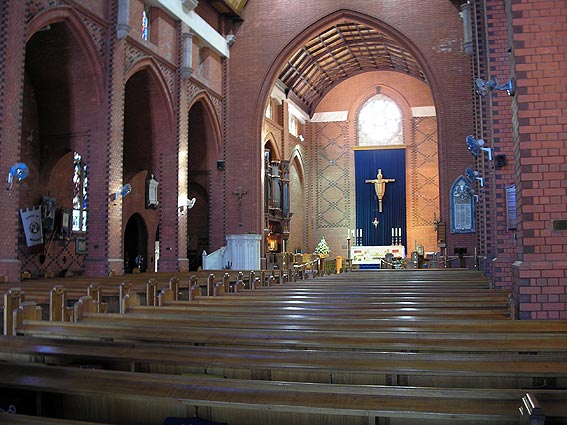 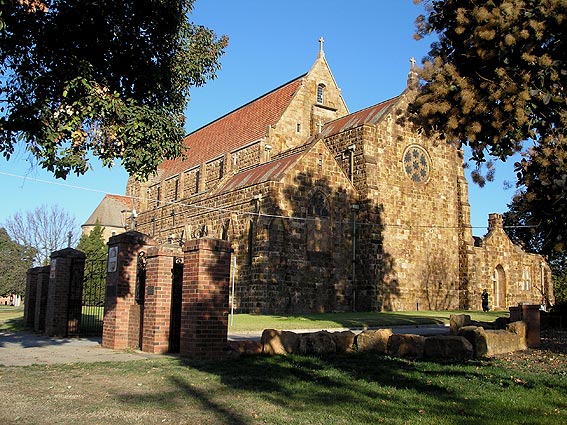 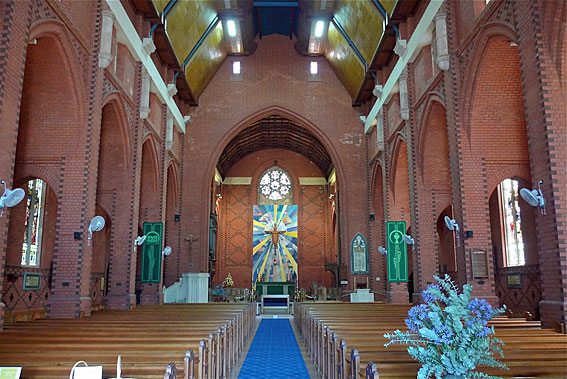 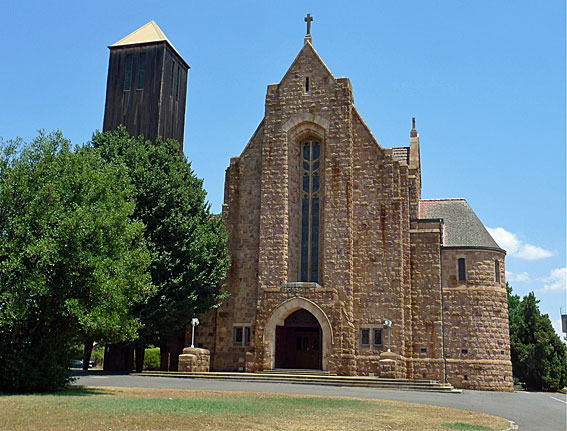