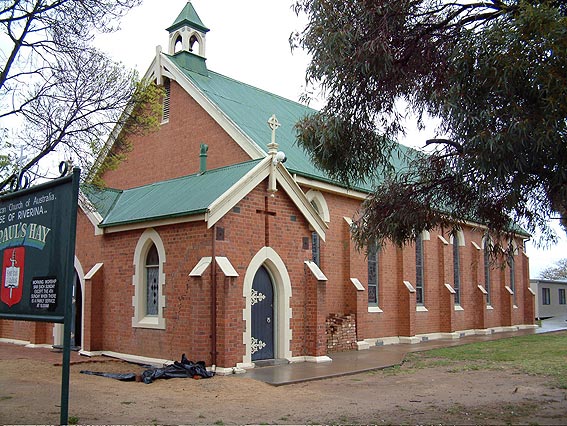 The present St Paul's Church was built in 1885, replacing an earlier building completed in early 1868. Vestries were added in 1908. The interior includes stained glass windows on either side of the nave and a war memorial altar of 1926. Around 1960 the interior was extensively refurbished under the direction of Louis Williams while in 1966 he designed a canopy and reredos as a memorial to Archbishop R.C. Halse. In 1984 the building ceased to have cathedral status exactly a century after the consecration of the first bishop of the region. It is of brick, in the Gothic style, with a bellcote surmounting the main façade, which incorporates a narthex and vestries placed under a transverse gable.1 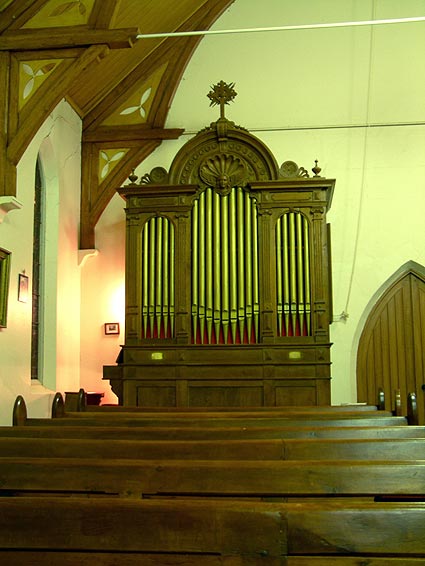 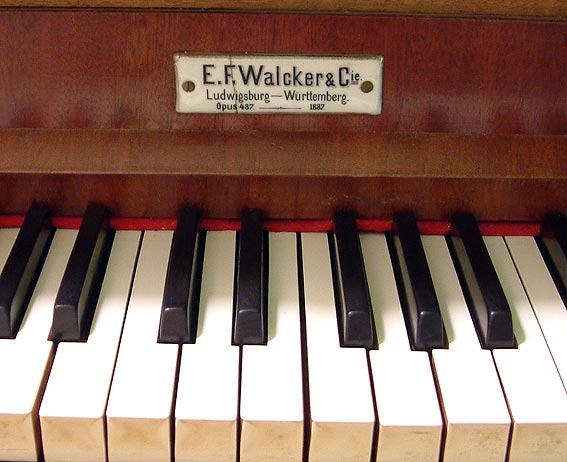 
The instrument was imported by the Sydney music warehouse, W.H. Paling & Co. The cost was about £300 and it was installed by a member of Paling's staff. It was purchased directly from this firm and opened in St Paul's in February 1891, arriving at Hay by paddle steamer. It was initially installed at the front of the church, near where the pulpit now stands.2

The opening of the organ was described in The Riverine Grazier as follows:

The opening of S. Paul's pro-Cathedral organ on Wednesday night attracted such a large number of people that before 8 o'clock all the regular sitting accommodation of the building was taken up, and those persons, many in number, who arrived after that hour either had to be accommodated with forms put up the aisles or were compelled to stand against the walls on in the porch. Mr G.A. Sherwin presided at the organ, and opened with an andante movement, introducing a flute and trumpet solo, and a chorus from "Elijah." During the evening Mr Sherwin also played a march "The Band Passing," composed by himself, "Largo" (Handel), and the "March from St Polycarp" (Sir F. Ouseley). Of the selections played, although obedience to the custom of abstaining from applauding at concerts held in sacred buildings precluded the audience audibly expressing their verdict, Mr Sherwin's own composition and the "March from St Polycarp" were the most popular, the former being a most effective yet simple piece of instrumentation. The tones of the organ are full and rich and under the skilful manipulation of Mr Sherwin the instrument was heard at its best. It will at the ordinary services immensely enhance the effect of the church music, and, accomplishing that, must be regarded as an admirable accession to Riverina's pro-cathedral, on the possession of which the church authorities are to be congratulated. A select musical programme of sacred numbers was rendered during the evening. Mr A.J. Park scored genuine successes in Blumenthal's "Life" and Handel's "Honor and Arms," a particularly fine rendering being given of the latter powerful song. Miss Macarthur sang in her sweetest tones clear as a bell, "How Beautiful are the Feet" (Handel). Mrs McKell, who made, we think, her first appearance before a Hay audience, sang Gounod's "There is a Green Hill" in such excellent voice and with such admirable expression that further favors from the same lady may be hoped for. "If with all your Hearts" (Mendelssohn) was sung by Mr Tritton in excellent voice, and Miss Foyle's pretty voice was heard to advantage in "He wipes the Tear." Handel's "Waft the Angels" received a careful rendering at the hands of Mrs Hotham, while the choir's contributions, uniformly excellent, were Packer's "Song of the Angels," Mendelssohn's "The Lord is mindful of His own," and Rossini's "Prayer from 'Moses in Egypt'" of which the last named contained in largest measure the elements of popularity.

The organ stands at the east end of the church just behind the pulpit. The framework and front of the organ are built of unpolished oak, the front being richly carved and presenting a solid and rich appearance. Its dimensions as it stands are 12 ft high by 8 ft [wide] by 4-1/2 ft [deep]. If space had permitted the instrument would have formed a handsome and striking addition to the ornamentation of the interior of the church. As it is, however, its position has, unfortunately, something approaching to a contrary effect, it having been necessary to make the organ face southwards, the only persons who have a face to face view of it being the members of the choir. The side is thus presented to the congregation, who, robbed of the privileges of admiring the instrument's architectural beauties, are given by way of compensation a partial view of the operation of the mechanical parts, a spectacle which has at times a somewhat disquieting effect.3

The original specification was given as follows:

The organ was built by Walcker, of Wurtemburg, and was fitted by Mr Denmar of Paling and Co., Sydney. It contains 281 pipes, as follows: Pedals - Bourdon, 16 feet, 13 pipes. Manual - Salicional, 8 feet, grooved to bourdon, 48 pipes; bourdon, 8 feet, 56 pipes; open diapason 8ft, 56 pipes, principal 4 feet, 56 pipes; trumpet, 8 feet, 56 pipes. The stops are put in on a new principle and work with a spring action. The combination stops are the grand [i.e. full] organ, the octave coupler, and the swell [pedal]. The cost of the organ was, nearly £300.4

The instrument unusually has the console placed at the side of the instrument, the stops being operated by a very early form of stopkeys, originally with porcelain labels. All of the pipework is enclosed, with swell shutters at the sides of the case. The specification originally included a Trumpet 8 ft which was later removed and replaced by a Flute 4ft. This could well have been due to the location of the instrument in an area far from regular maintenance. The windchests are of cone pallet formation and have stood up well to the rigours of the local climate. The oak casework is of exquisite quality, the façade pipes arranged 5-9-5, with French mouths and surmounted by an elaborate carved superstructure incorporating a curved pediment surmounted by a cross, shell motif and carved head. 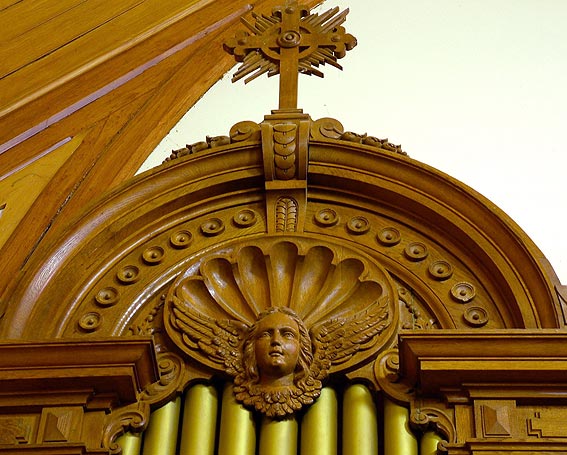 
Charles Richardson of Sydney was described as carrying out "extensive repairs" to the organ early in February 1901:

Mr. C. Richardson, of Sydney, who is engaged on extensive repairs to the organ at St. Paul's, Hay, announces in our columns that he is prepared to submit prices for repairs, tuning, etc. His address is – Post Office, Hay.5

The instrument was re-opened on Sunday 16 February,6 having been moved from the south to the north side of the altar:

Some alterations have recently been made in the arrangement of the interior of St. Paul's pro-Cathedral which have materially improved its appearance. The organ has been removed from the south to the north side of the altar, enabling the episcopal chair to be placed in the south.7

In association with a complete renovation of the church interior in 1926, the organ was overhauled and moved to the west end of the church:

The choir and sanctuary have been re-floored and the furniture set out so as to give more space and dignity to the whole of the church. To attain this end, and also to help the singing in the church, the organ has been removed to a more suitable place at the west end. This work was carried on under the direction of Mr C.G. Jones, who at the same time completely overhauled the organ, and tuned it very effectively. Two expert organists have pronounced very favorably on the work.8 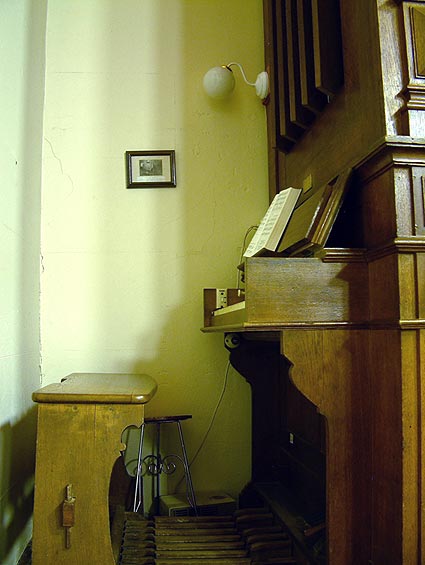 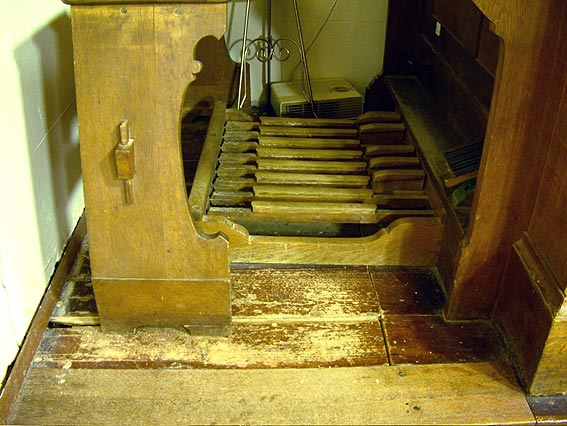 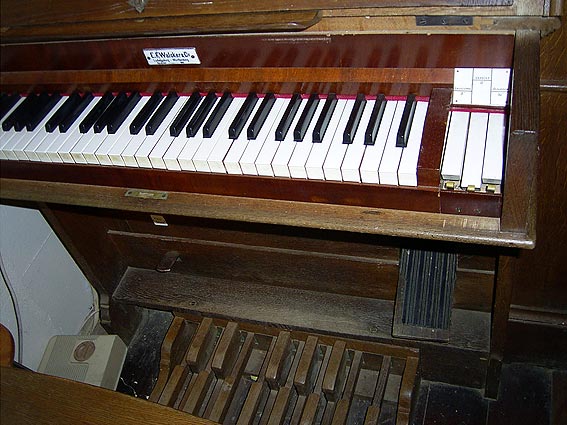 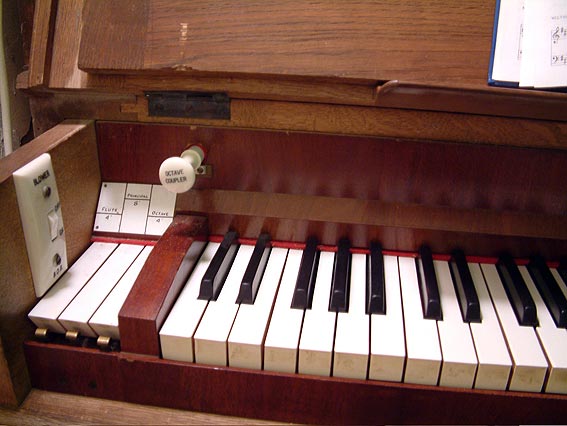 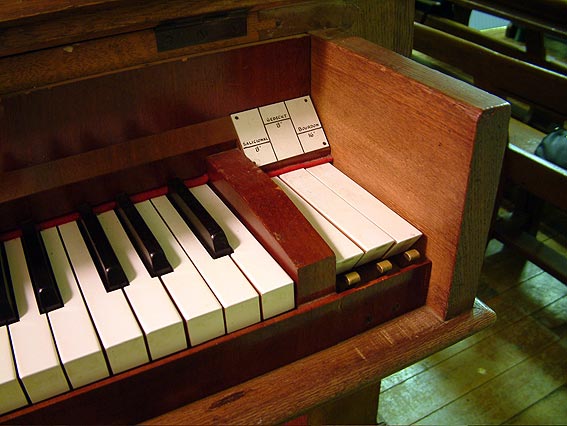 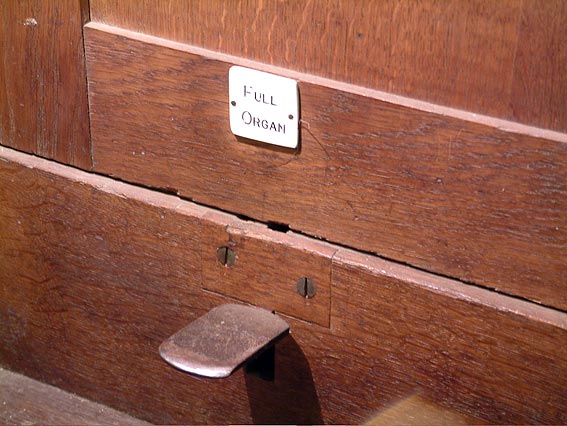 Console details, showing the plastic labels
that replaced the original ones
[Photographs by Pastór de Lasala (2006)]


The instrument was renovated in 1968 by Arthur Jones of Sydney, although a plaque on the instrument uses the term 'restored'. The work appears to have involved general cleaning, the addition of plastic stops labels to replace the original ones, a new blower, and the spraying of the front pipes to match the six candlesticks on the reredos.9 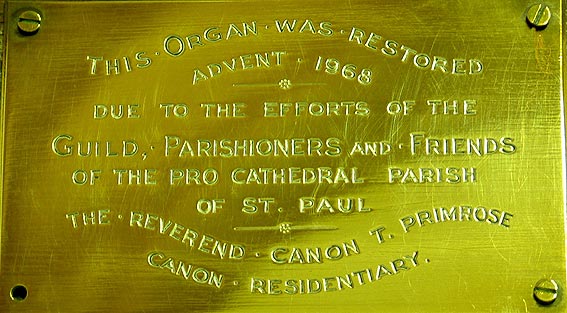 John Stiller commented on the voicing of the stops as follows:

This organ is an outstanding example of late nineteenth-century German organbuilding. Its superb tonal qualities illustrate the various concepts of tonal design which were in vogue in Germany at the time. In particular, the husky Principals endow this organ with tremendous acoustic power. In contrast, the very mellow Gedeckt and silvery Salicional are an indication of the utmost effort to obtain maximum tonal variety from a limited tonal scheme. The firm and solid Bourdon provides a good support for the other stops.10 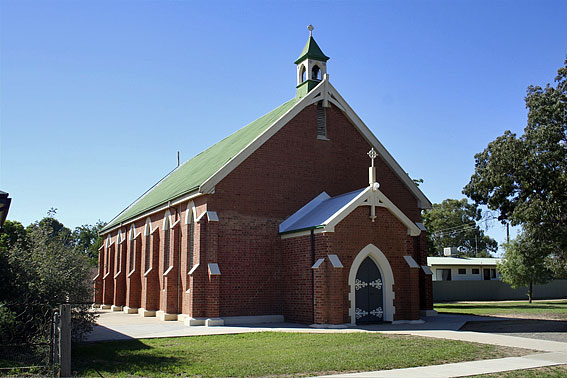 St Paul's, Hay, after repairs to the building
[Photograph by Trevor Bunning (March 2009)] 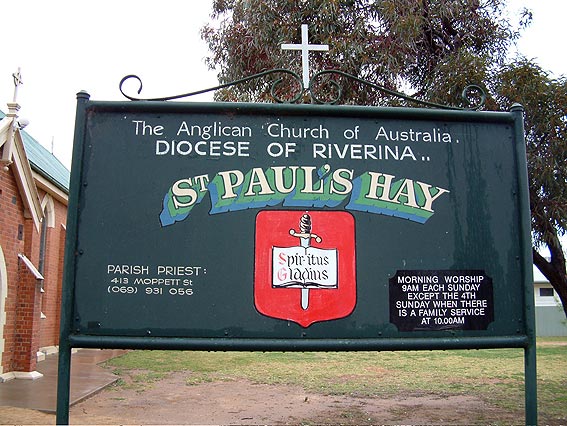